There's so much more left to discover before the world ends... Let's Play Horizon Zero Dawn

Horizon Zero Dawn is a game by Dutch developer Guerrilla Games, makers of the Killzone series (and one other game called Shellshock: Nam '67). In a world populated by machines and humans in a post-apocalyptic Earth, Aloy is a young girl of the Nora tribe, a small hunter-gatherer group who lives and worships under the guise of the All-Mother. Raised under an outcast named Rost, Aloy grows up in the wilds devoid of any contact with the Nora. And just outside the safety of the Embrace, the Nora homeland, machines roam the landscape, aggressively targeting any and all humans who get in their way.

But it didn’t always used to be this way.

Long before, humanity existed like we do today, but something happened to erase them off the face of the Earth, leaving behind only the largest of their structures. No one really knows what these Old Ones were like or why their time of the "Metal World’ ended, but humanity’s had to start all over again.

The story behind this game has a ton of potential to be spoiled, so keep that stuff under wraps until the time comes.

If one were to play this game normally, the story would unravel rather slowly, but edited down, I think I can quicken the pace quite a bit. So even though it took me 40+ hours to beat the first time through, most of that was just wandering around looking for stuff. Side quests and “errands” will have their own separate videos in case you’re just here for the story.

I will definitely be taking care to show off the wide array of combat mechanics in this game. There are at least twice as many ways to deal with machines as there are machines themselves, so I’ll be trying to show them all off. When the combat is done right, it has a really good feel, both visually and gameplay-wise.

I will also tentatively be doing bestiary-type bonus videos for the various machine enemies out there, because in the heat of battle, it can be hard to explain everything that I would want to. And, if I can, I will be doing extra videos about each of the tribes in the world, as there’s a bunch of cool stuff there as well. These bonus videos will not be subtitled, but rather voiced.

There are also quite the number of collectibles in this game, and I won’t be getting all of them, and the ones that I do get will mostly be off camera, so as not to pad out the run time with more of the same.

Let’s get started with an introduction cutscene and the tutorial for our adventure! 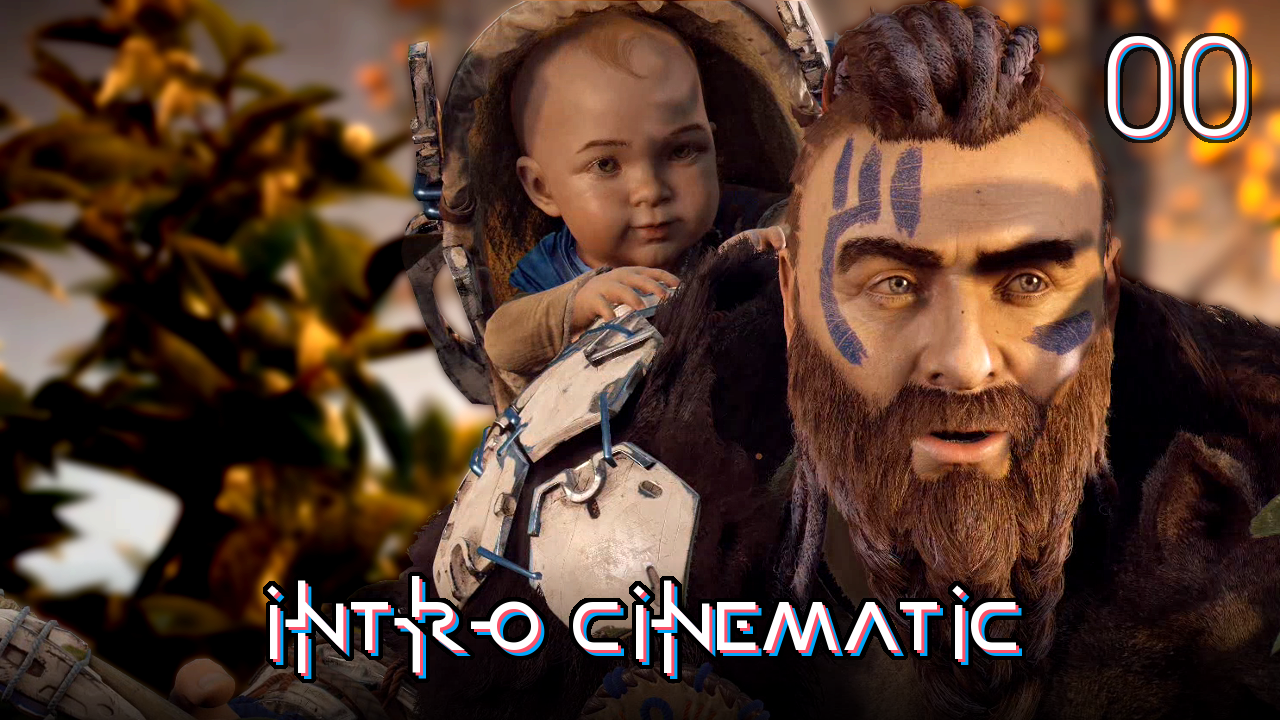 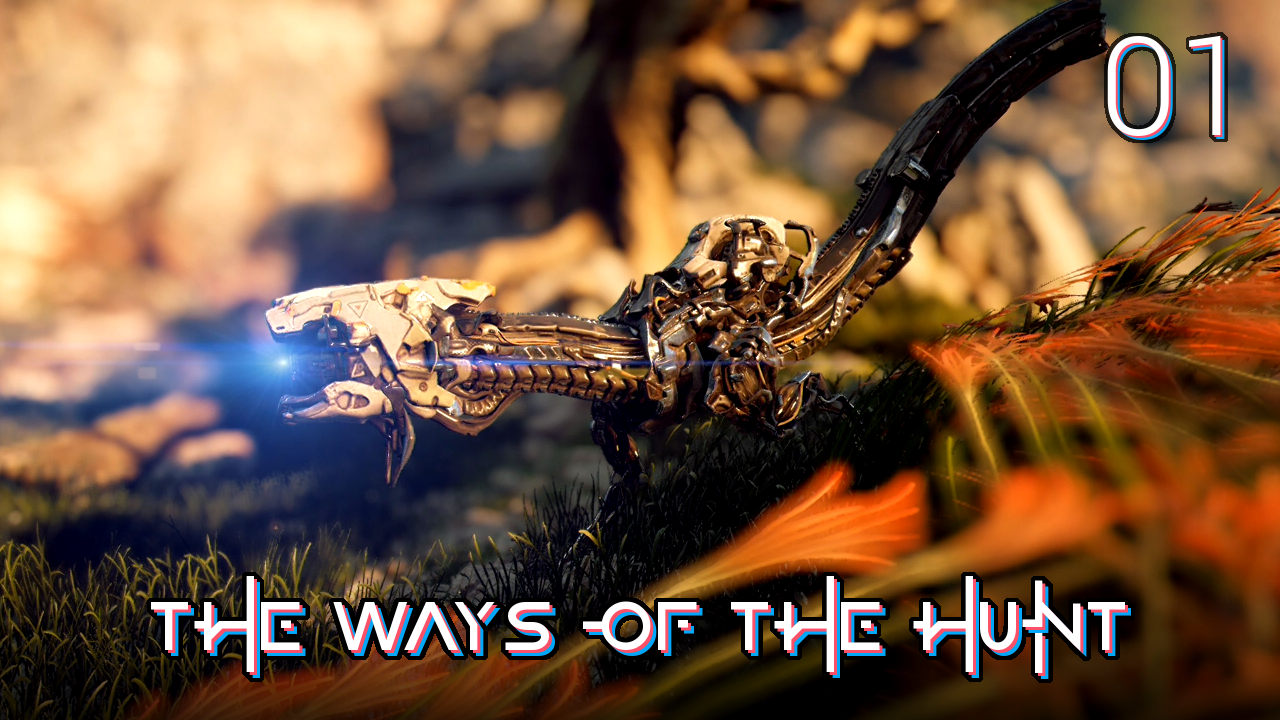 For these first two parts, we’ll be going through the early life of Rost and a young Aloy. We’re going to learn that the world is a dangerous place and that we’ll need to learn how to survive in it, or else this adventure may be cut very short.

(In the future, I hope to maybe run a poll for some times that we get to choose Aloy’s reactions to situations.)

i’m super happy that someone is lp’ing this game! this is my favorite game by far this year!

Are you going to try to 100% it or did the main storyline first and then go back to the side quests?

I’ll be going for 100% quest completion as far as the story and side quests go, and anything I miss along the way, I’ll definitely go get them when I can.

I will, however, be avoiding starting some side quests until I’m positive I can complete them (somewhat) quickly, since some of them take you far across the map before you’re ready.

I committed to playing Nier and Persona this year and missed Horizon Zero Dawn. I’m super happy to see this LP get started

all i can say is that i’m super stoked that they have a DLC coming out soon.

Yes, I did not expect a Horizon announcement at E3, but that was very cool! 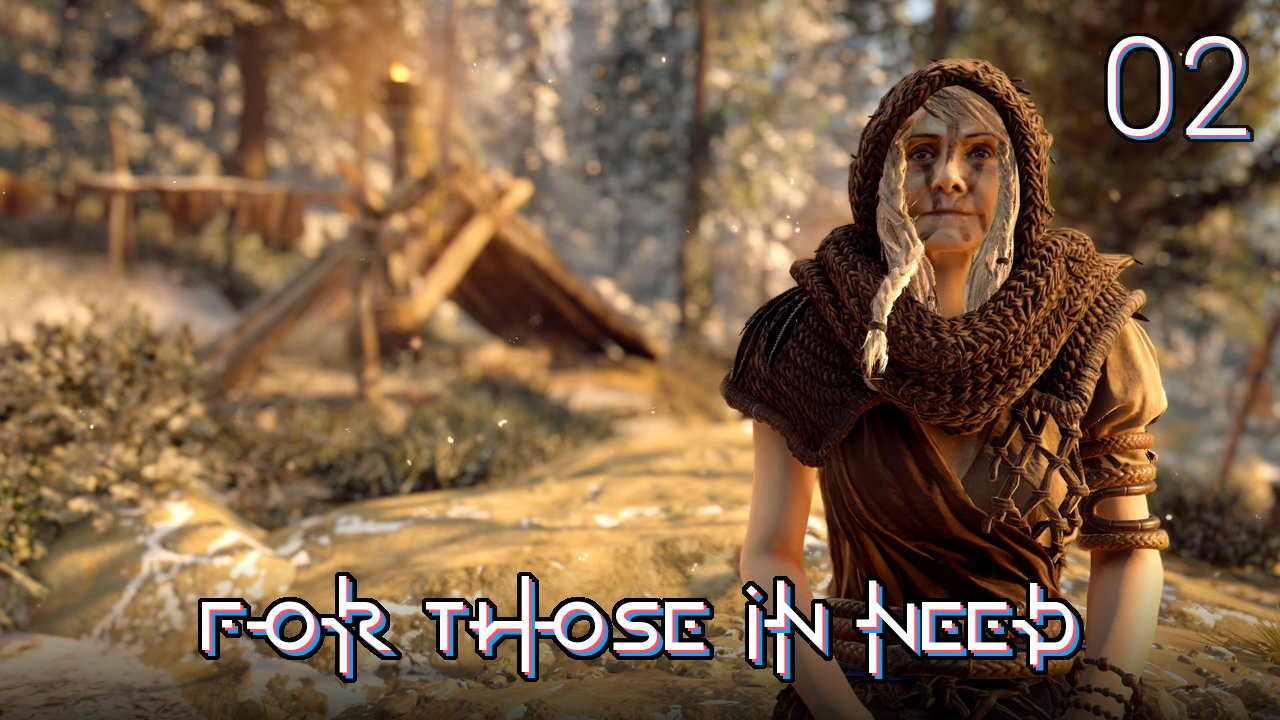 We’re almost ready for the proving; we just need a new weapon and Rost’s final lesson. In my bestiary videos, I’ll be showing off combat with the machine types in more detail.

Also, this and the next episode are just some side quests as we prepare for the proving, so I’ll try to get the video out sooner than I normally would.

The voice acting in this game is so much better than the lip syncing, that it’s kind of distracting.

Okay. So. The lipsyncing is not as great, no.

But there might be some points in the game where the voices just completely desync, as that happened during my last playthrough. If that happens, I’ll see what I can do in post to correct that, but it may just be a problem that happens.

That’s a damn shame, because everything else in this game (animations, voice acting, ambient music, environmental design, character design) appears to have been highly polished.

By the way, if you guys haven’t seen this yet, this cosplay is absolutely amazing!

everything i heard about this game compared it to nier automata, but from what you’ve shown us so far, that comparison doesn’t do it justice. i am looking forward seeing more. 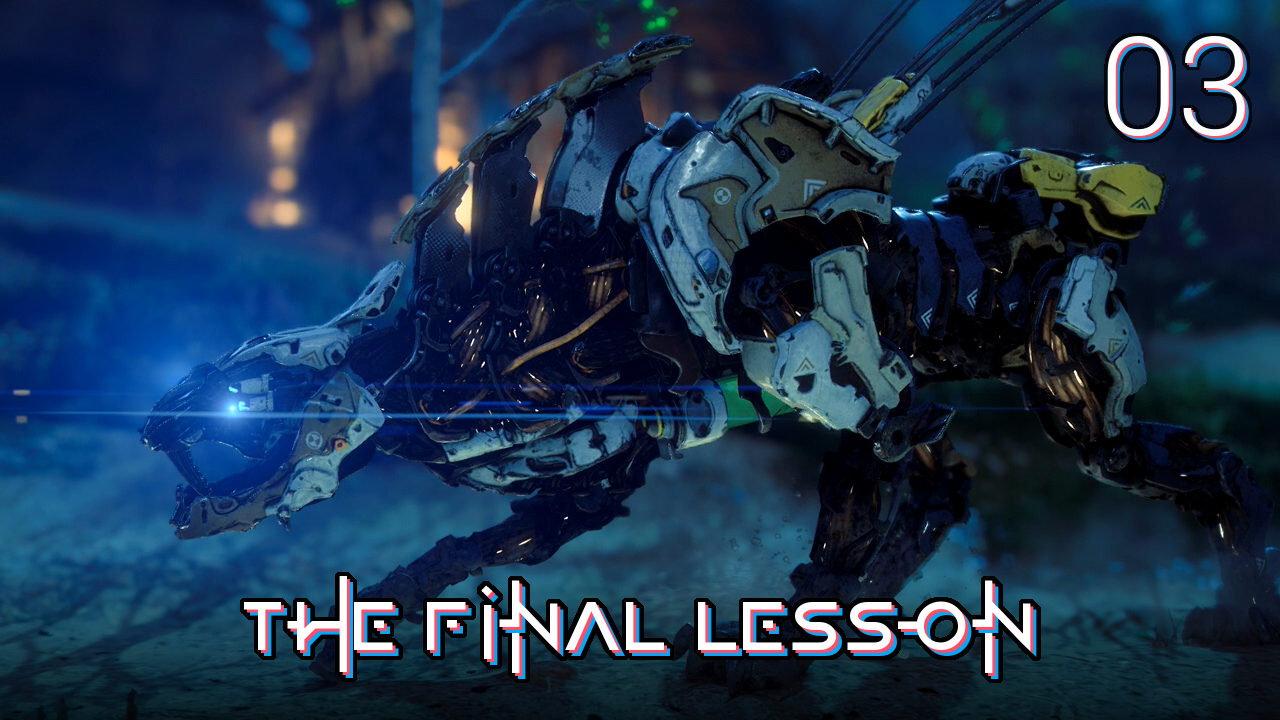 Let’s finish up some side quests and go see what Rost has in store for us. We get to encounter a cool, new machine, too!

everything i heard about this game compared it to nier automata

I can kind of see that, but N:A leans much farther into Science Fantasy territory than this game does. HZD isn’t necessarily hard sci-fi, but it stays much closer to the realm of reality. Horizon often feels like the new Tomb Raider games, but with a mix of a couple other contemporary series, like the Batman Arkham games.

Let me guess: Somewhere along the line, we are going to be able to tame and ride a Watcher. 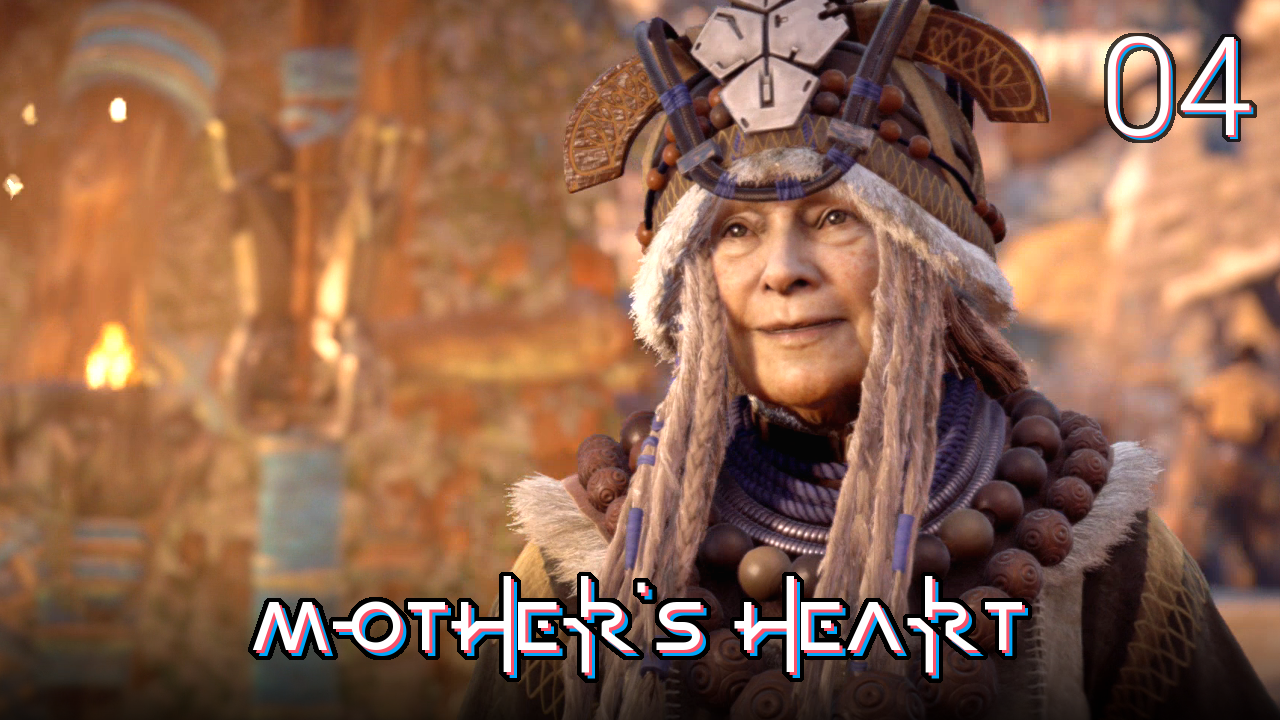 Just before the Proving, the Nora celebrate with a huge festival and feast, but with the arrival of us and another tribe or two, things are a little tense. It certainly doesn’t help how Rost left us at the gate.

Either way, we’re just a day away from answers, and then we’ve got a few things to take care of.

Wow thank you for doing this game. I don’t have time to dig into games much anymore but this one looks awesome. I love that you’re digging through all the dialogue trees.
I do have one request/suggestion, could you slow down every so often and look at the landscapes? Mothers Heart and the Embrace look fantastic but we’re zipping around so much it’s hard to appreciate!
Anyway, thanks.

Why do we even want to join the Nora anyway? They just seem like such douchenozzles. Let’s go with Muttonchops McGee and see Meridian instead.

Surely the facts of our origins can’t be that exciting?

I can definitely do that. I’ve also had a plan to show off the photo mode since it is what I’m using to get (most of) the thumbnails for the videos.

Oddly enough, photo mode is enabled during this first visit to Mother’s Heart, but I wasn’t allowed to move the camera to get a good shot. They had it disabled for some reason.

Oh, and the pace is going to slow down a lot after the next 2 (I think) videos, as that is when the world truly opens up for us to just go off and do stuff.