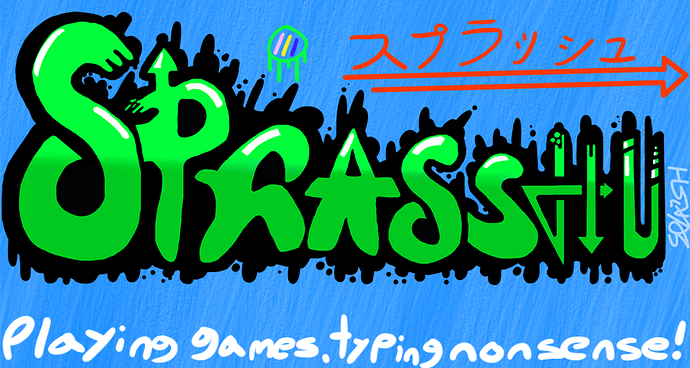 What’s up everybody? Splash here! Round here, you’ll see me streaming on Twitch whatever. I mostly stream Nintendo and Steam games, since that’s what I own and that is what I play mostly. I am also an amateur graphic designer, but don’t expect art streams anytime soon.

I used to stream everyday around 7 - 8 EST everyday, but now that I am unemployed, I plan on streaming alot more often until I find a new job

Weekly on my Discord server The Splash Zone, I also host party streams with my Discord members, where we stream games like Jackbox, Golf With Friends, Tabletop Simulator and whatever else people are game for. We also occasionally, alot more than once a week, play Mario Party Netplay, where 4 of us suffer for your entertainment!

As an ongoing series for Twitch and later YouTube, I do these streams called Stream LP’s which are self-explanatory. Basically, I stream a game all the way to completion that people either voted on to stream, or that I wanted to stream myself and then upload the edited VODs of it to YouTube as an LP series. Nothing special.

UPDATE: Stream LP’s are no longer a thing I plan on doing anymore. All VODs uploaded to YouTube will not be of a series, but rather of my own accord for streams I plan on keeping a backloggery of.

As part of a Patreon obligation, whenever said Patrons are around, I do these streams I call Dedicated Patron Nights where I play a game they recommend to me for a while and give them my overall opinion on them.

An oldie but a goodie. Splatterdays are dedicated Splatoon streams. Formerly held on a dedicated Splatoon Discord called The Spawn Point, Splatterdays have since moved over to Project Respawn after some internet drama caused me to leave The Spawn Point. They consist of me whether playing it solo, with a squad or in a private battle, simply playing Splatoon. They used to take place on Saturdays, but have since been sporadic with whenever I decide to stream Splatoon and/or can set up PB’s, League Battles or Salmon Runs with my friends in the community

Occasionally I participate in video game races set up by my friends. There are two types of races:

I very rarely do solo streams because I just flat out am not good at doing solo commentary, so I usually have a few co-comms on hand for when I stream. Without these folks, my streams wouldn’t be very entertaining to watch so I’d like to thank these people for their support on commentating with me on prior streams:

So if any of that is right up your alley, then come check out SplashStreams! All are welcome to join my humble community!

Splash is a cool guy with a cool stream, check it out sometime.

Been slow at posting updates here as of late regarding my streams, but just as a heads up, the stream LP for Day Of The Tentacle and Sonic Adventure has now been completed, and a new stream LP for Earthbound (which has begun, me and my co-comms are 1 sanctuary boss fight in as of this post) and Psychonauts are gonna be starting up soon.

I’m also gonna try to be more consistent with posting updates and with announcing when I stream.

Oh hey, I got a credit on something. Not that I did a whole lot, experience outside of RPG’s is minimal at best.

Sorry in advance if I turn out not to be as funny as I try to be.

It’s has been over 3 weeks since I was last able to post here. Lost my internet for a while sadly. But now I am back with a more stable connection and to celebrate, tomorrow I’m am gonna be doing a 12 hour stream! The stream goes until noon to midnight EST and will consist of:

Cook, Serve, Delicious! for the first hour (Chill Stream to ease me back into things)
Castlevania Aria Of Sorrow 100% Map Completion, all endings
Sonic Adventure 2, casual run, see how fast I can beat all story modes, practice for my All A-Rank LP
Splatoon Private Battles at 8 EST for about 2 hours
Super Mario 64, see how many stars I can get in the remaining 2 hours

If any of that sounds intriguing to you, then come check it out!

I’m gonna be inactive here for a while. My new ISP is absolute trash for streaming because the location I’m in gives off too poor of a signal for my internet to allot me much upload and download speed. So for the month of April, I’ll be absent.

I’m back online after 3 months of inactivity!

I quit my job due to the hostility of my work environment. Back to streaming full-time again until I find a new job!

Been having alot of power outages as of late. Today, my power was out for 6 hours as management had to leave town to buy a brand new fuse for a super outdated fuse box. Hopefully this new fuse will prevent any further power outages from occuring so I can once again resume to doing regular streams. I usually don’t post here when I am streaming because I most times forget this thread exists, so check the LP.Zone discord for posts of when I or other streamers go live, or join the Splash Zone and become a part of the community!

Update about the stream thread: I changed my Twitch URL to Sprasshu because people in my community suggested I change it to something shorter than SplashProductions