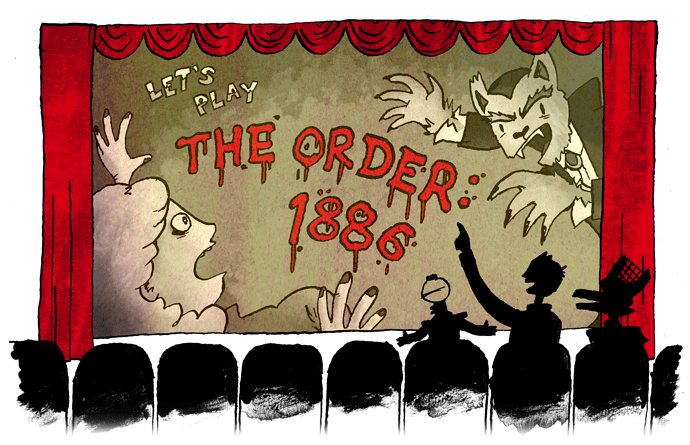 Thank you SuperGraffiti for the thread header

TRIGGER WARNINGS FOR THE GAME IN GENERAL: Violence

The Order: 1886 is a very disliked game for several reasons. Reason 1 being that it was only about 5-6 hours long. I don’t think this would have been a big deal without reason 2… it was $60 at launch. Combined with reason 3 being that the game has more cutscene than gameplay, it’s no wonder it didn’t fair well to the public, who had been waiting for it for years, listening to the hype about how gorgeous the game is and how it will change the gaming world and blah blah blah.

I didn’t listen to any of the hype. I also didn’t buy it at launch. Truth be told I can’t even remember when the game was launched. First I saw of it being released was about a year later, sitting on the $20 games shelf at my local Target. I picked it up then and played through it in two sittings. Honestly I liked it, even if it was just a generic cover-based third-person shooter with a meh story. I guess it was because I didn’t drop $60 on it.

This LP is a bit different. I’m not really explaining the game much. Have you played a third person shooter? Well it’s one of those with a “slow time down and shoot a bunch of guys in an autowin situation” button. Instead, the two versions of this will simply be commentary and no commentary. If you want to just watch a movie, that’s cool. If you want to see three dinks riff on said movie, that’s cool too.

Joining me is Bobbin Threadbare, AKA the guy what who played the Thief games, and SkippyGranola, AKA the guy who what did Magicka. Together we will go through a world of intrigue, magic, and Victorianism as we shoot werewolves with lightning guns that Nikola Tesla made for us.

So, who’s gonna take point on the ‘Screenwriting Cliche’ counter here? Because I can count at least 3 in the first 10 minutes.

This game looks like it’s gonna be a mild ride. Thanks for biting the bullet on this one Kalon.

First of all, “We’re juiced up on Grail Water” is a phrase that I never thought I’d hear about anything, and second: as far as The Order goes, do they dance when’ere they’re able?

Man I don’t even think they like Clark Gable. It’s the worst version of the Round Table ever.

I had such high hopes for this game.

and then it just…died. I felt like it had too much going on when it should have been one or the other. Like, it was two games at once [?] but they put two of them together and hoped for the best.

The whole “named after the knights of the round table” thing just makes me think of Kingsman.

Wow. This is somehow better looking than I expected, and I had high expectations going in.

It’s kind of sad as far as how low my standard for attention to detail goes, but I was impressed that after chugging the Grail Water the blood & bullet hole remained in Igrane’s shoulder instead of just magically fading away.

Is this game very repayable? Platinum games are pretty short but they merit lots of play throughs.

Also if The Order are a continuation of the Knights of the Round Table does that mean they decided to serve the Saxons after they conquered Britain, and then the Normans once Billy the Bastard took over? How did they handle to shift to Anglicanism? What happened during Cromwell’s Commonwealth? How many were Jacobites?

When I got my PS4 from a pawn shop, this was the free game I got with it. I never touched it since I bought Bloodborne and Fallout 4 to play with like a day later, so this is my first time actually experiencing it.

The setting seems like something that could be interesting, but the decision to have your first experience with Hunter: the Victorianing be mowing down a bunch of mental patients just to find a few surprisingly easy to kill werewolves is…odd. Admittedly, I’m guessing this might all be explained later, so I’ll reserve any overarching opinions on the story as a whole until then.

“You’re exhausted… physically, mentally…” I expected that to end with, “and that’s just the viewer at this point.”

Is this game very repayable? Platinum games are pretty short but they merit lots of play throughs.

It is not very replayable at all. You can go for collectibles but once you’ve done that it’s over. Combat scenarios are very static, the game’s very linear, and honestly the higher difficulties aren’t that fun. (IMO, of course)

Yeah, basically this. I love the game but I honestly wouldn’t have touched it again if I wasn’t doing the LP.

All I could think about it when I heard of it was Law and order 1866 which I feel would have been a much better game:

New York 1866: Looks like this guy was the werewolf of wall street Donk Donk

From what I’ve heard, the werewolves in this game leave much to be desired. It’s got nothing on Bloodborne as far as that goes.

So, do we ever get an in-universe explanation for what Blacksight aka Bullet-Time is? Or did the devs just figure the game needed an “I win” button for all the shootouts and shove it in there?

All I could think about it when I heard of it was Law and order 1866 which I feel would have been a much better game:

New York 1866: Looks like this guy was the werewolf of wall street Donk Donk

Law and The Order WVU:

In the criminal justice system, werewolf based offenses are considered especially heinous.
In London, the dedicated knights who investigate these vicious felonies are members of an elite squad known as The Order. These are their stories .

I can only imagine the court scenes.

“Your Honor, my client is mentally unsound, and was therefore incapable of determining whether his actions at the time of the werewolf attack were right or wrong.”

“OBJECTION! If he was a mental patient I would have just shot him!”

I’m impossibly invested in finding out whichever Knight that Ice-T would be.

Gawaine: “It’s a mix of Holy water, some oil Tesla cooked up and shaving of Excaliber, kids are calling the Holy Grail”