13th Age is a d20 pen and paper game, based off of Dungeons & Dragons, but with significant improvements (in my opinion, at least) both mechanically and narratively. Some highlights include the escalation die, which speeds up combat, icon dice, which give narrative control over to the players, and the replacement of a list of skills by free form backgrounds created by the players. It’s an extremely fun game, that can create some interesting fantasy stories.

Okay, but what is this?

This is an actual play of a 13th Age campaign, run by myself starring dijon du jour, Shell_Game, beezleboob, and Roy (I don’t think he has an internet name). It’s a story about a bunch of weirdos trying to save the world from an oncoming disaster, while also trying to find themselves and their place within a world caught between a dying age and the start of a new one.

Updates are currently scheduled to go up on Fridays; this includes the normal episode plus any associated fireside chats.

Wait, what’re “fireside chats?” Should I be listening to them?

Due to time constraints (Roy has to be up early for work, and I have to teach on Mondays), our sessions normally run about two hours, which we find to not be enough time to really say everything that needs to be said. Fireside chats are pure role play sessions, usually directed and organized by the players for those moments when they’re not out doing quests and whatnot; very rarely will I be involved in them, and, while they’re not required listening, they do tie into the main plot, so listening will enhance your experience. Plus, I personally think they’re some of the best bits we’ve recorded.

Apolena Noc is a Wotan (more commonly called “raven-folk”) from the Wastes, and the self appointed “Ambassador of Dragons.” A bard of the Three, it is Apolena’s goal to unite chromatic and metallic dragons, and, if you believe her, she’s been chosen by Aurum Rex to do so. A kind and gentle soul, she’d much rather talk than fight, but if push comes to shove, she’s more than capable of handling herself.

Even more recently, she seems to have teamed up with the Queen of Hell, for some unknown reason! And she has a crown now? Full of strange magical stones? How’d that happen?

Blaze Fox is a mustelian, a race of weasel people from deep inside the Wild Wood. He was once a magician of some repute, but after a falling out with his organization, he locked his magic away, vowing never to use it again; in the process, he managed to fracture his spirit, spinning off different versions of himself and sundering his personality. Now he’s seeking the lost bits of himself, though he isn’t exactly making much of an effort.

Blaze Fox is played by the Heavenator. 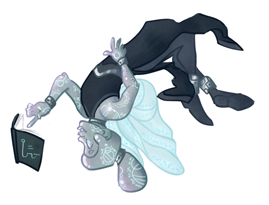 Dawn is a pixie, a construct created by the Fey Queen and the Thrice-Wise Magus, primarily to guard ancient fey tombs. Due to being one of the earliest pixies constructed, Dawn displayed unacceptable levels of independence and thought and was promptly left in the woods to die. Instead, she made her way to a city, learned magic, became a wizard, and earned herself a position at New Axis’ Imperial Academy of the Arcane Arts library as its head librarian. Now she’s wandering around looking for new books to read. Yes, really.

Dawn is played by beezleboob. 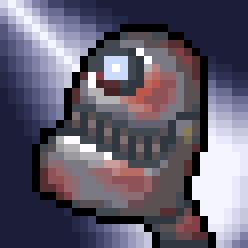 Hammer is a dwarf-forged, a machine made to serve the Glittering King’s subjects. For some unknown reason, Hammer developed independence and a sense of self and promptly left dwarven society, in search of something more. He found it, when a chance encounter with some halfling priests showed him the light of religion. Now he wanders, tending to the sick and helping the poor all in the name of [ERROR DEITY NAME NOT FOUND].

More recently, he’s decided to escort the kobolds saved from the Temple of the White to Diktionarie. He has promised to meet the party again, at some point.

Hammer was played by Roy. 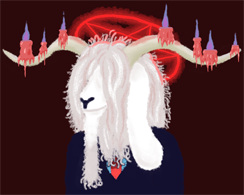 Hugh Manmon is a Capricorn demon from Hell, and a loyal subject of the Queen of Hell. Thanks to a bureaucratic snafu, Hugh has found himself the only free demon in all of Hell and the mortal world; since his exile from Hell, Hugh has been eating souls, summoning the undead, and building complex "dungeons" for would be adventurers to practice on. As far as most people are concerned, Hugh is a completely normal human person, thanks to his hellish glamour. 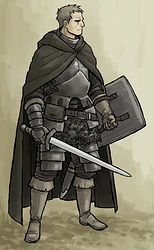 broadmoor pog564×915 438 KB
Lt. Marshall Broadmoor is an agent of the Free City Council, part cult buster, part fixer, and part bureaucrat; despite his somewhat strange job, he is a capable fighter and leader of men, using his superior knowledge of tactics to aid his allies upon the battlefield. How he came to work for the Free City Council is somewhat of a mystery the lieutenant would rather not speak upon…

Lt. Broadmoor is played by Roy. 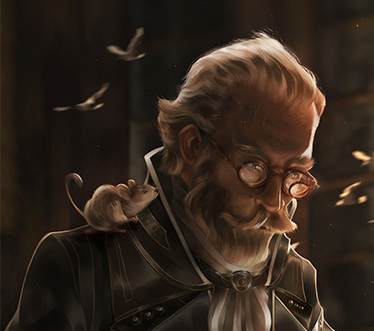 Teus Heeren is an inventor who only wants to help people; unfortunately everything he invents somehow, someway hurts people. Its really not his fault though; some demonic bureaucracy maybe got messed up and a curse meant for his father (one of the Empire’s greatest inventors) kinda sorta attached itself to him. After doing some accidental murders while trying to help a town rebuild, he was put on the Empire’s list of criminals and sent to the Temple of the White, where he was wisely put on house keeping duty for the Ebon Gauntlet camp, far away from anything that could be used to accidentally invent something. His “companions” are three robots, all of which, despite their intended function, are extremely deadly and combat capable.

Teus is played by Brutus Salad. 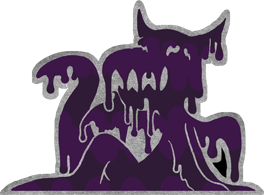 Squire Shoesnak is a kobold (maybe?), and also a very good boy. He’s a real squire and, using all his money (about two gold), he hired Hugh to escort him around in hopes of finding his knights. He’s brave, eccentric, and all around the very model of a knightly squire. 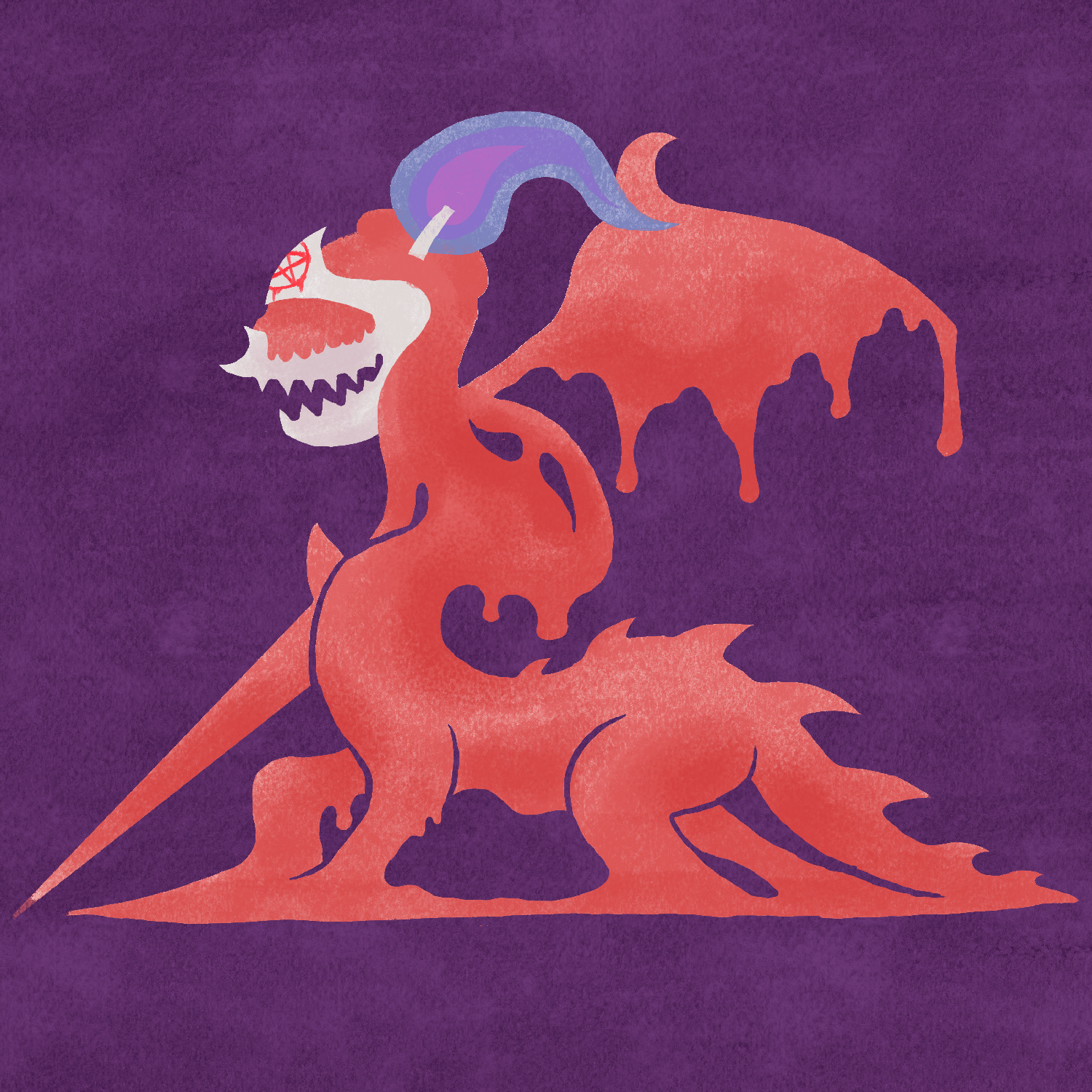 Sir Hughsnak is a fusion of the demon Hugh Manmon and the kobold Squire Shoesnak; taking from Squire’s carefree attitude and Hugh’s drive to protect his friends, Hughsnak will always be there for his friends, come Hell or high water. He’s brave, bold, caring, and a little uninspired (seriously, look at that name!), but most of all he’s a great friend. 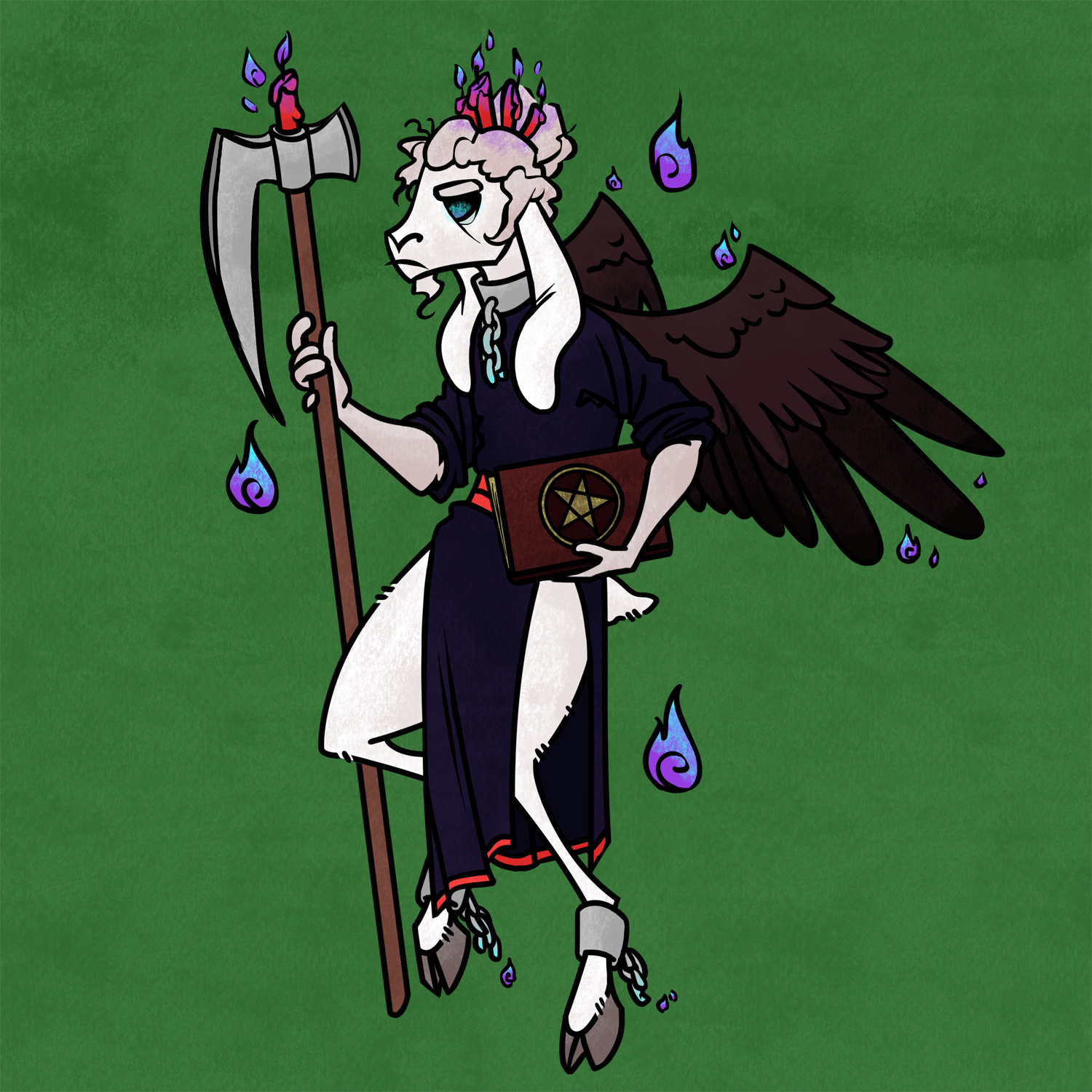 Spawn is a fusion of Hugh and Dawn and almost certainly knows everything about anything, which is why they’re constantly bored out of their skull. They combine Dawn and Hugh’s mother hen tendency to become the ultimate parent!

Spawn is played by both beelzeboob and dijon du jour.

twilight pog1295×2200 692 KB
Twilight is a fusion of Dawn and her sister Dusk; their combined knowledge and magical might makes Twilight a fearsome enemy, as she is able to sling both fantastic fae magics and deadly demonic spells.

Twilight is played by beelzeboob. 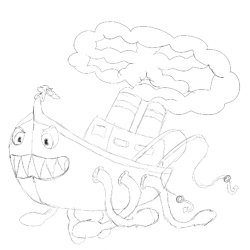 hugh ship fusion1750×1750 280 KB
The Vertex Perfected is a fusion between Hugh and The Plump Vertex, resulting in… some sort of strange, chaotic being more like a cartoon than a ship or a demon. The Vertex Perfected combines the ship’s powerful weapons with Hugh’s demonic abilities, creating the ultimate, if slightly weird, living airship.

The Vertex Perfected is played by dijon du jour.

Map of the World 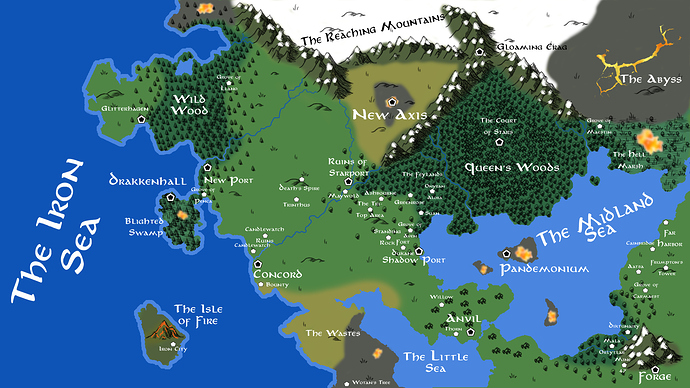 A very special set of notes for episode 65:

This is a 5D Dungeon! 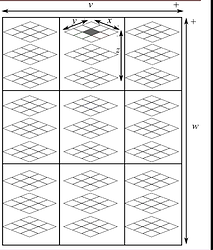 This is a room in a 5D dungeon! 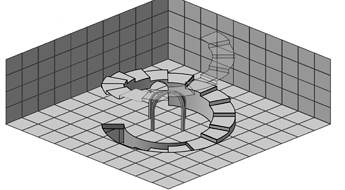 This is how doors work in a 5D dungeon! 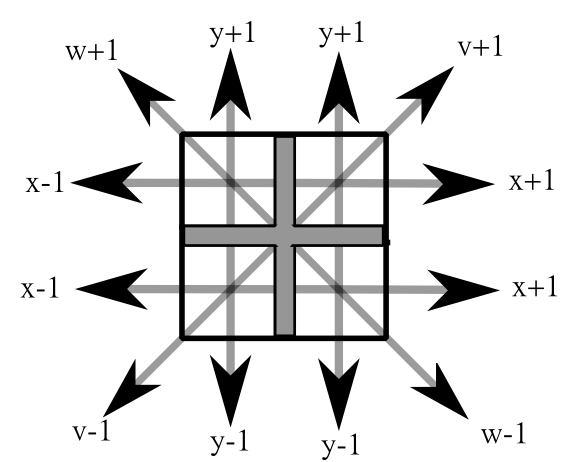 Ground floor and ready to cry.

Making an account so I can engage people here! We’ve got a great team and a really amazing GM

I really am enjoying playing this game, and I can’t wait to see where it goes~
Here is some fan art I did of Apolena because I love her! 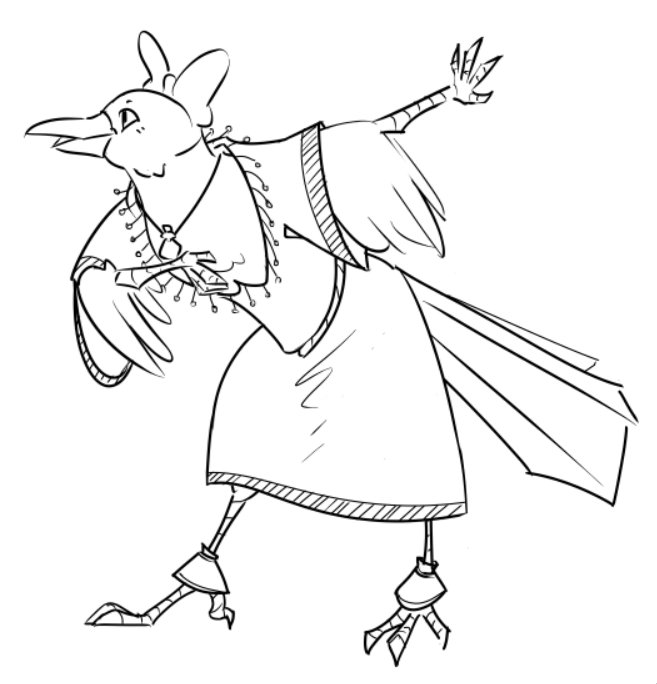 I’m really excited this is finally being released, and I really hope people like it and love these sweet sweet children we made.

Speaking of whom, here’s some art of my boys from the prologue episode; from top to bottom: Squire Shoesnak, Sir Stolmiteeth, and Sir Kissentell. 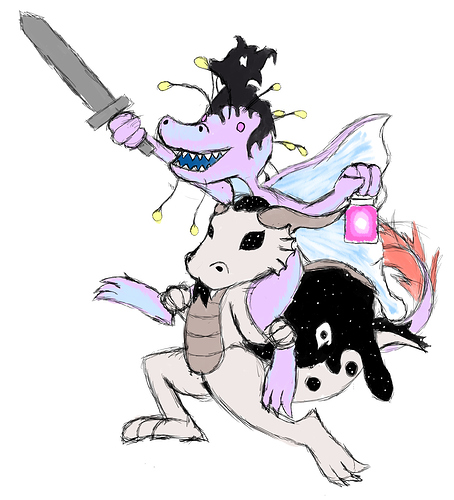 I am really glad that Dijon isn’t posting his cursed fanart.

I hope everyone enjoys this. Playing with this group is so rewarding and fun! I have nothing art related to add right now, sorry.

Because I’ve got the day off for student/teacher conferences, I’m gonna go ahead and post this week’s episode a little early! You can find it here; this is when things really start to get going, as both the players and myself finally start to grasp the characters and the world we created.

We also have some more supplemental stuff! First up is Apolena’s journal, which will be updated just about every week. It’s a real neat look at what’s going on in Apolena’s head and how she, the only real mortal in the party, sees the events that the party encounters. This first update is a double one, which leads me into our next supplemental reading.

So, let me start off with some really kinda bumming news: the next episode, which was just a real neat dungeon crawl, didn’t record right, and we couldn’t recover it (following this, we started using backup stuff, so it shouldn’t happen again). While we can’t recover it, I’ve edited my GM notes from the session, thrown them into a Google doc, and am posting it for you guys to read. I offer a short recap of what happened during the events of Frumpton’s Tower at the start of episode 3, but if you want the scoop on what is going on and just what Dawn’s new magic item is all about, I’d definitely suggest you check out the notes! You can find them here.

It’s so much fun to just. Interact with the other characters. Very excited for more to come out. I’ll probably have a draw to add soon but i’m not the powerhouse artist that dijon or beelzeboob are.

This episode was really fun! It was nice to finally be able to start getting in deep with character stuff.
Also I loved so much how the party was getting into full detective mode gathering testimonies and shit when julia goes nah there’s a trail that leads to the thing it’s fine.

I finally earned the thread title, so be excited for episode six, where I just make everyone cry.

You had me at anthropomorphic bird character.

I have been successfully pandered to.

Uh oh! Heads up I think i’m a little quiet in the beginning. My mic is better now. But i have been having fun playing my bird, and julia has given me pretty free reign on what the ravenfolk of this world are like! So um. Hope you like it. :B

I’m super curious now as to what episode 6 contains.

So many onions. Just an entire session of cutting up onions.

I fucking knew Julia would put Shrek in the game.

Update time! This week the party finds itself in the dragonkin town of Aatsa, which is holding a festival for Aurum Rex! What should be an interesting cultural event, turns into something much more political when the Ebon Gauntlet gets involved. Apolena takes center stage, as she must live up to her ideals as the Ambassador of Dragons. The episode is here.

And when you’re done with the episode, we have out first fireside chat! Hugh, Dawn, and Apolena sit down to hammer out a deal between them, with regards to Hugh’s completely normal behavior that is not at all demonic. You can listen to it here.

I drew a new picture of Apolena that I wasn’t super satisfied with but my party members convinced me they liked it so in solidarity i contribute one art! 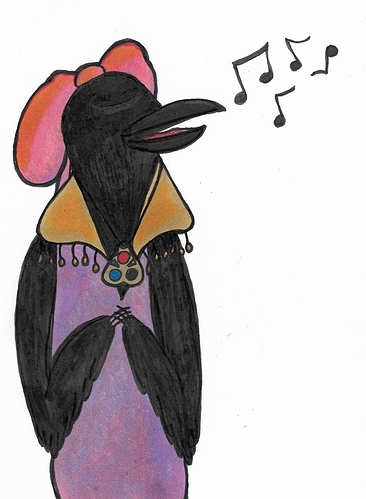