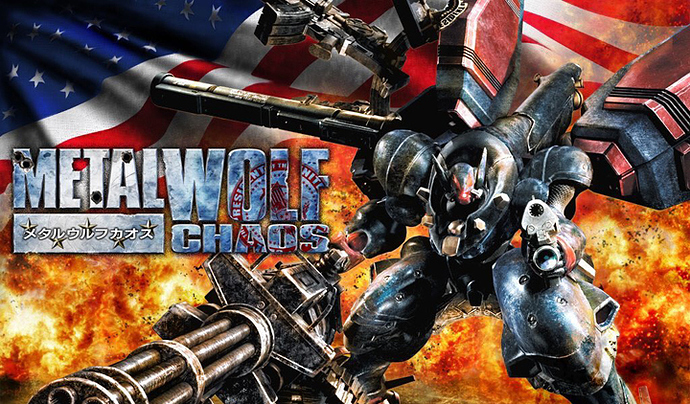 Welcome! It’s that time again. Every four years, there’s a lot of arguing, finger-pointing, and loud-mouthed drunk relatives that we all deal with (and I’m not talking about the Olympics). Rather than discuss this, let’s take our mind off of it with a totally unrelated title.

In December of 2004, From Software released Metal Wolf Chaos on the original Xbox. If you were following gaming news around that time, chances are you heard of this at some point! The premise? A gun-toting president is ousted from power by his vice president! Why? I dunno, terrorism or something. Look, it’s complicated. Let’s not think about it too much! The president must now take back his rightful place, armed with his trusty battle-suit!

Even though it’s by the same dudes who gave us Armored Core, from what I gathered, the devs involved were the same ones who dealt with the Otogi games (also on the original Xbox). So basically, we didn’t necessarily have the Armored Core dudes heavily involved. That said, some GUI elements might be familiar!

The game didn’t make it stateside, possibly due to it being a rather on-the-nose jab at President Bush (ie: worried about localizing a political-ish game). Alternatively, this was pre-Demon’s Souls From Software, who somehow seemed reluctant to make good marketing decisions.

In spite of of us never seeing this in the West, the spoken audio is all English (with some wonderful voicework, lemme tell ya). Even though the dialogue was likely written by someone with a good grasp of the language, and all of the voice actors speak (what sounds like) native English, it is all slightly “off”. You’ll see what I mean.

Playing it is… Tricky. There is literally nothing in the sense of Xbox emulation, so the only ways to play this seem to involve either tracking down a Japanese Xbox or soft-modding a cheapo off Ebay. Guess what I did~

I’m running a very rough translation patch (by NemsMole). This translates a few things in the menus/UI but it’s very spotty and chock full of typos. Past a point, Aegisub is doing almost all of the leg-work. On that same topic, I’ve made subtitles for all of the spoken audio. Since we’ll be talking over fair amounts of this (as well as the audio-work being spotty), I figured it was the best approach.

What I show in the playthrough and what I know of this game is from a hodgepodge of information. Google is extremely light on details, but the LPs by Genpei Turtle and ArclightBorealis are a massive help. Props to those dudes, seriously. If you want additional info (or don’t want to hear a bunch of rowdy boys shoutin’ at the game), definitely give those a watch!

WHAT THE. POST-COMMENTARY?? What is this garbage?? YOU HEARD RIGHT. This game encourages repeat-runs of levels to grind for materials/cash, so you’ll likely see some splices from different runs to show stuff I missed as well as more weaponry/gear.

Joining me again, hot on the heels of Asura’s Wrath, is Vicas, Kuvo, & TieTuesday!

Update is likely coming next weekend. There are a TON of post-game unlockables that come up in New Game+, so I’m getting a NG+ (100%'d) playthrough ironed out.

Oh man, this game is so amazing.

Also, the assistant doesn’t really seem to give any shits on the topic of collateral damage.

Mr President, was your dad’s statue really that much of a threat to democracy? The White House lawn staff are gonna have a hell of a time cleaning all that rubble up

When I die I too want a sick gun set into the cement of my tombstone.

This game is silly and great.

Mech games seem to From Software’s other main gimmick since they also did the Another Episode game series. It’s a shame that Armoured Core is the only one to make it out of Japan.

Wilson, how could you hurt your father like that?

I think this game might be a condemnation of the Vietnam War. “We had to destroy the village to save it” as the old saying goes.

Nothing is better than watching someone experience Metal Wolf Chaos effectively blind. I can NOT wait.

I have trouble imagining how this can possibly escalate at this point, but I feel like it doesn’t have the choice not to?

is this the dark souls of democratic action

I watched the first episode of this while doing some simple workouts with a pair of 2kg dumbbells.

Made me feel all hotblooded and strong, like a REAL American president!

Has there ever been a definitive answer as to why this never got any kind of US or European release (outside the demo apparently being in XBox Magazine at some point)?

Not really. It’s most likely either “this is way too political” or From just didn’t think it’d see much profit? I dunno… I mean, they did give us both Otogi games which have a rather heavy eastern-fantasy setting (if I recall right). A mech game where you play as the US president definitely should’ve been on the roadmap.

Metal Wolf Chaos honestly looks kinda clunky gameplay wise, but I feel just the spectacle of it would of made the XBox kind of a must own for people who like ridiculous and silly action games. I feel like the reason they never brought it over HAS to be “because it’s too political”.

Oh man, this game! I saw videos of it on youtube back in the day, and I’ve been fascinated by it ever since. It’s a damn shame that there’s really no easy way to play it, given that it was a japanese exclusive on the original Xbox of all things.

This game looks like a bit simplified and arcadey take on Armored Core, which is fine enough. That voice acting though, hoo doggy, that’s the stuff.

I have no idea how From got the idea to make its two niches “dark fantasy about dying worlds” and “real robots”, but I’m completely on board with this.

Nthing that the voice acting is incredible. <3

I mean, they did give us both Otogi games which have a rather heavy eastern-fantasy setting (if I recall right).

Oh man, Otogi. Otogi 2 (and JSRF and Phantom Dust) convinced me to buy an Xbox, and I can only hope that From revisits the series when they get tired of being ridiculously successful with Souls.

Also excited to see more of this LP, the writing is A+ so far.

If you wanna split hairs, the Earth from Armored Core 4 onwards gets progressively more and more fucked up due to the AC4/4A equivalent of Minovsky/GN Particles being extremely toxic/radioactive/harmful to the environment.

Suffice to say the niches kinda bleed into each other a little bit.

Armored Core games are wonderful because they always start with “things are bad. They’re gonna get worse unless you Do Stuff & Beat the Game.”

Then you get to a sequel. “So, uh, things are even worse now, somehow.”

Moral of the series: Things can ALWAYS get worse.

I have to say, I’m flabbergasted that this doesn’t have the anime tag.