I Am the Law - LP Judge Dredd vs.Death

Judge Dredd vs. Death was released in Europe on the PS2, Xbox (the original one), GameCube and Personal Computer in 2003, or alternatively 2005 for America. It was then released again in 2009 on Steam, giving it just as many different release dates as Skyrim.

The game is told from the perspective of Judge Dredd, a scowly authoritarian future cop that punches crime square in the mouth. The story itself revolves around Dredd facing off against all manner of crime, be it petty, severe or maybe even supernatural…?

At launch this game received mixed reviews, praised for its timesplitters-esque multiplayer, but criticized for “lackluster graphics”, bizarre character models, weak AI and simplistic gameplay. However the game has some of the most ridiculous, over the top ragdoll physics that I’ve ever seen, on top of that, the cutscenes are edited with superb (unintentional) comic timing, making this game a menagerie of obscene hilarity.

And that’s exactly what I want to share in this LP. You’re invited to chill as Mr. DJB and I play through the campaign as we find simple joy in watching a frowny future cop defeat all of the death crime, watch break-dancing ragdolls fling themselves into the sky and lightly dissect the sub-text of dystopian fiction. Game Spy used to run the online servers before they shut down so unfortunately I can’t showcase the co-op or multiplayer. But hey, the rest of the game is still shimmering golden trash in my view.

I feel like maybe this game was made with a sense of humour that wasn’t intented by whoever commissioned the game, almost like with Darkened Skye She’s got the Skittles to pay the bills. Let’s Play Darkened Skye, except not quite as blatant.
Which reminds me of something I’ve always wondered about Judge Dredd; when he was originally created, was he meant to be a parody/satire? Or was he supposed to be taken seriously?

when he was originally created, was he meant to be a parody/satire? Or was he supposed to be taken seriously?

Somehow I don’t think sending every living person to the Cube is going to save them from death, but it’s admirable that Dredd will at least try. And by “admirable” I mean terrifying.

I’d be really worried if Judge Dredd was meant to be taken seriously. Like if the theme’s got warped in such a way, where someone incapable of understanding satire decided to take the source materiel and fill it with their own narcissistic desires of being an action star. Oh wait…

Is this a Stallone or an Urban dig? Because I think the satire is there is Dredd (2012) it’s just played straight.

Is this a Stallone or an Urban dig? Because I think the satire is there is Dredd (2012) it’s just played straight.

Oh Stallone for sure, he ruins that film! Dredd (2012) didn’t have the themes in you’re face all the way through, but the tone remains consistent. I think it’s an amazing action film with beautiful cinematography and little sprinkles of the comics written in here and there. Still nothing beats this: 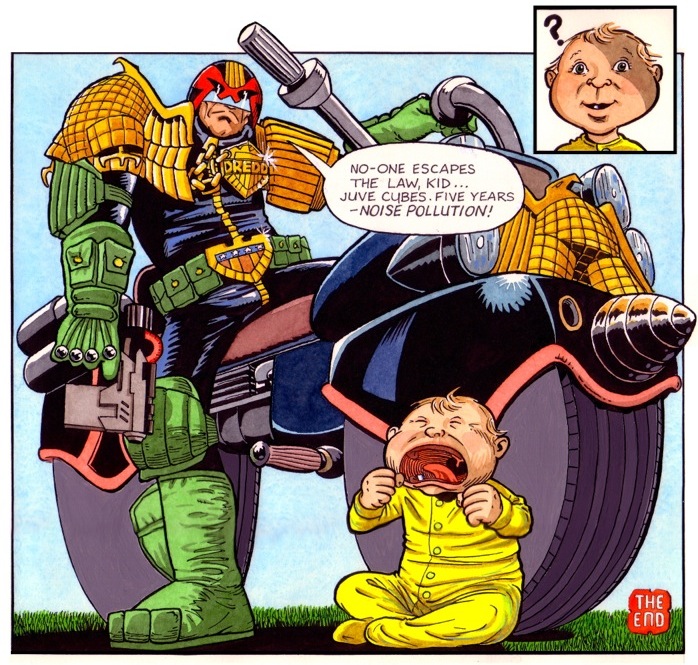 A flying wagon full of vampires crashes into an offshore prison leading to a riot. Judge Dredd must do the anti crime and arrest the prisoners for rioting and “arrest” the vampires from living.

The main talking points in this video are funnily enough what I hate about the Stallone Judge Dredd film from 95.

I hope every level of the game starts with at least one NPC you can immediately handcuff unprovoked.

The original plan for Dredd (2012) was that it was going to be part of a series, with subsequent films adding more details like Rico, mutants, robots, and finally the Dark Judges. They wanted to ease people into the setting, because they thought one of the reasons Judge Dredd (1995) failed was that it threw all these details about the setting at the audience that they had no reason to understand or care about.

Also your LP convinced me to buy the game during the Steam summer sale because I love old, bad games that really tried.

its great to see an lp of this game, i just recently picked it up on gog, and have found it to be great janky fun.

Product placement is rampant in this game, but the weirdest part is that it’s only in these next two episodes. I understand product placement is a necessary evil for smaller studios that need all the help they can get; the studio gets funding in exchange for advertising.

What interests me here is that I don’t really know where the money went because every aspect of this game’s design looks behind what you’d see in 2003/ 2005. I heard that Rebellion had a data lost half way through the games development, so maybe they had to pull in advertisement commission to help make up for what they lost? Or maybe it’s a conspiracy to make people obey the whims of “RED BULL,” using the matching colour schemes between Red Bull and the Judge’s Lawmaster Motorcycle, to subliminally suggest that “RED BULL IS THE LAW!”

Or maybe the studio was bankrupt? Who knows, it’s just really out of place here.

The original plan for Dredd (2012) was that it was going to be part of a series, with subsequent films adding more details like Rico, mutants, robots, and finally the Dark Judges. They wanted to ease people into the setting, because they thought one of the reasons Judge Dredd (1995) failed was that it threw all these details about the setting at the audience that they had no reason to understand or care about.

That’s something I’d really love to see. The film was received well, I think mostly thanks to the cinematography, but I don’t think it made it’s money back while it was in cinemas which to be fair is tough to do with an R rating at the beginning of Autumn. It’s a shame really seeing as it’s a universe that you can do a lot with

OK it’s a zombie level set in a mall of all places so lets be honest who’s mind is blown? But what’s interesting is that this level was designed before the Dawn of the Dead remake plagued everything with zombies, back when people remembered that zombies where a jab at commercialism, rather than a gimmicky tool. So prepare yourselves for some of that biting social satire that our lovable scamp Judge Dredd’s known for!

The Judges already are liberal, they accept anyone as a Judge regardless of race, sex, gender, sexuality, etc. if they meet the proper qualifications.

The Judges already are liberal, they accept anyone as a Judge regardless of race, sex, gender, sexuality, etc. if they meet the proper qualifications.

Oh aye but it’s still fun to see him be total garbage to anything with a pulse… or everything in existence really.

Either way the writers of Judge Dredd have made good use of the setting; a blend between a dystopian cyberpunk city sprawl and a post-apocalypse. It allows them to explore both their ideas of the human condition and ideas of societal norms without breaking the tone like other works of fiction have.

I figured it’d be worth taking a look at some of the unlocks from the campaign along with what the multiplayer was sort of like before it all got shut down.

In this update I take a look at what you unlock through playing the game: Arcade Mode. These are more or less multiplayer maps with time based missions in which you either have to kill a set number of enemies or arrest a set number of enemies. This is can get really repetitive and tiresome when the maps spawning locations don’t really work in your favour, at least you get some cool music and a quick mission to mess around with the different weapons in the game.

Completing these missions with the highest rank (Judge Dredd) then unlocks cheats you can mess around with in the campaign, such infinite health, ammo and law meter, there’s also a variation of big head mode and low gravity ragdolls which makes the physics system even more comical.

I also take a quick look at the multiplayer, playing a game of death-match against some bots. This game type isn’t quite what reviews made it out to be. There’s a lack of game types and the maps aren’t designed in much of an interesting way so every game kinda of feels the same. The rounds last between five and ten minutes and so lack the pacing that the single player offers.

I have tried to set up a server using 3rd party programs to see if it’s different playing against actual people but I’ve had no luck. Since Game Spy ha gone forever i guess we’ll never know what it’s like. Good thing this isn’t a multiplayer only game!

The Special Judicial Squad (SJS) are Internal Affairs. They are the Judges who judge the Judges.

About half way through the game and Dredd’s finally decided to do his job and arrest an actual criminal and put an end to the undead threat. Still not fighting death though.

That said the game is starting to pick up the pace for the next few missions, with each level taking between 10 and 15 minutes to complete. It may not sound like much but I think anything more and the game will overstay it’s welcome with how simplistic the mechanics are, there’s only so much you can do with shoot a perp in the wrist then press a button and/or shoot a perp till it rag-dolls.