You See That Wall? You Can Go Through It - Let's Play Rainbow Six Siege

In this LP I will be quickly covering the single player content then we will move onto the multiplayer modes. I’ll be showing off each character, map, and each mode. Viewers will be able to vote on what I show off and when, selecting operators, levels, and modes to see. As of right now it will comprise of solo post commentary done by me but in time that may change and some friendly faces may be added in.

As for the story it takes place after the deactivation of Rainbow Six. During a time when terrorism is on the rise a new leader named Six has started to gather up individuals from special forces, police forces, and armed forces, to form a new Rainbow Six team. These new Rainbow Six operators are then tasked with defending key targets from terrorists or attacking terrorist cells directly. Each character has their own background and reason for joining Rainbow Six which is revealed in their bios. The main bulk of the story follows these operators as they attack/defend objectives and try to put a halt to this international epidemic.

For a more in depth description of the game Rainbow Six Siege is a multiplayer shooter with an objective in every match whether that be to rescue/defend a hostage, disarm/defend a bomb, or to secure a package. A large amount of the settings in Siege are destructible with walls, barricades, windows, trap doors, ceilings/floors, and a great deal of the objects within any of the levels. The combat is asymmetrical with two opposing sides, attackers and defenders. There are different operators for attack and defense with four from every CTU(Counter-Terrorism Unit) that came with the base and two operators from each CTU that was released as free DLC. That is two attackers and two defenders, or one attacker and one defender, from each CTU. Each character comes with a special gadget that only they can use which makes each character function as their own class. Each character’s loadout is customizable allowing you to decide which guns they’ll be using and what sort of attachments on them there will be, along with secondary gadgets like grenades or breaching charges. Aside from the competitive multiplayer the game also features a co-operative mode called Terrorist Hunt which can be played if PvP is simply not your thing. Siege is frequently updated and has seen a lot of love from the developers causing it to be an ever evolving every changing game with new characters and levels added for free every few months.

Let’s begin and Let’s Play shall we? 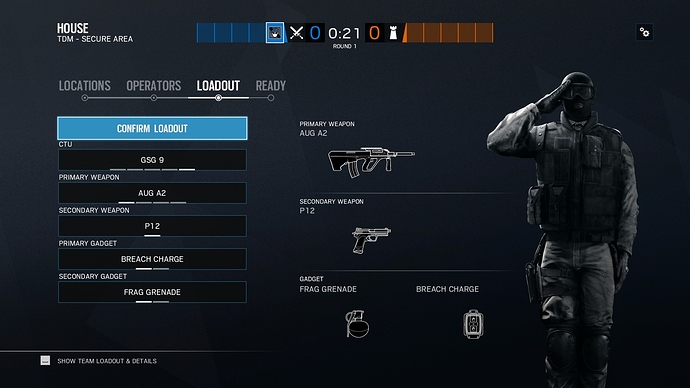 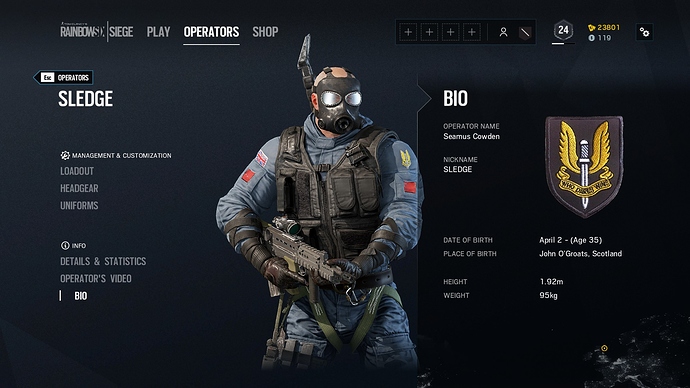 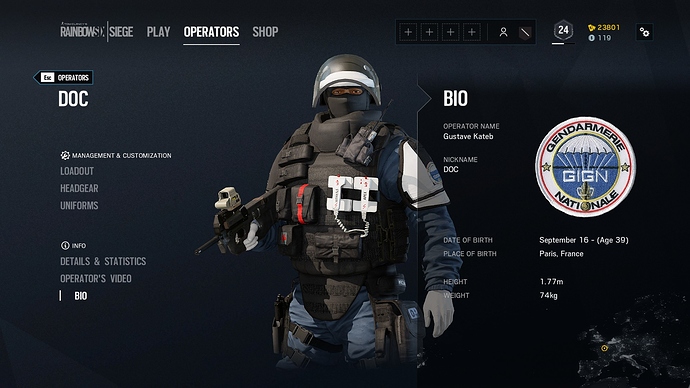 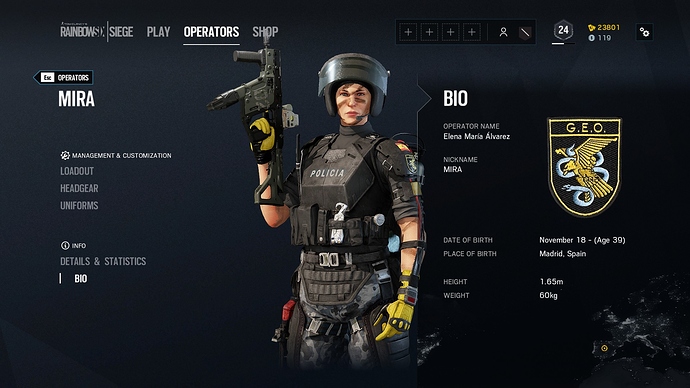 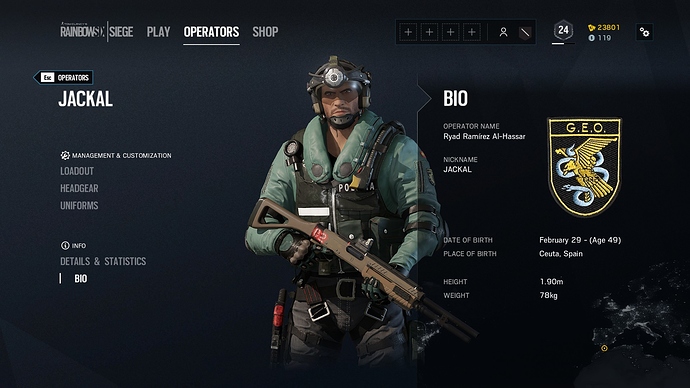 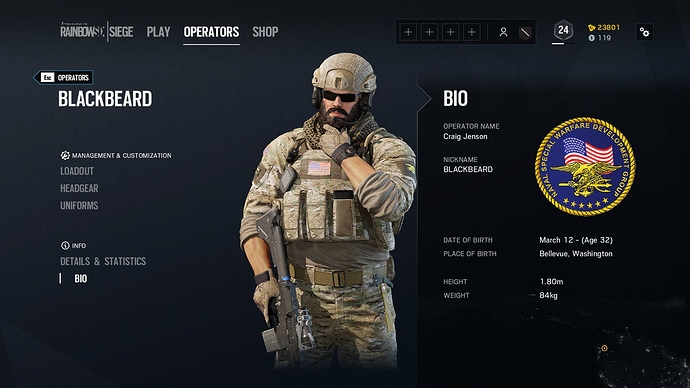 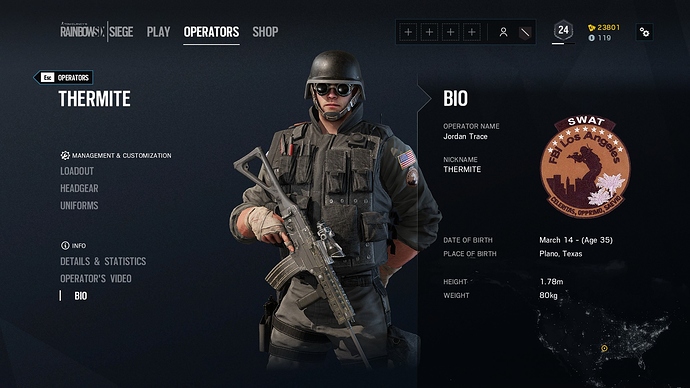 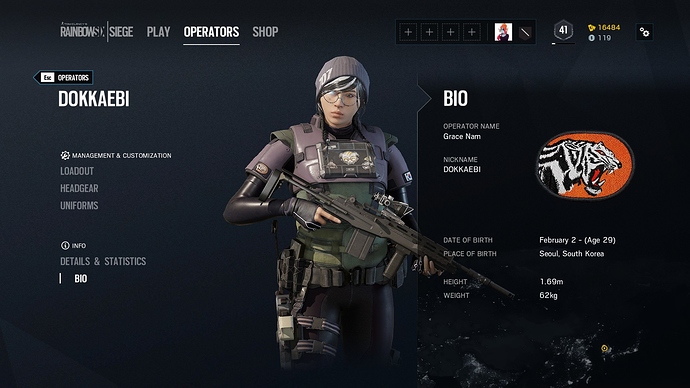 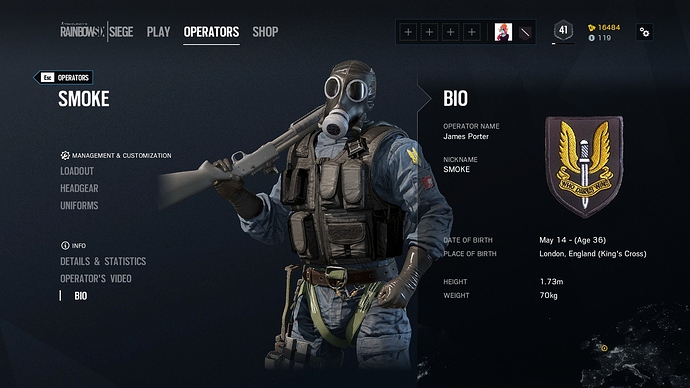 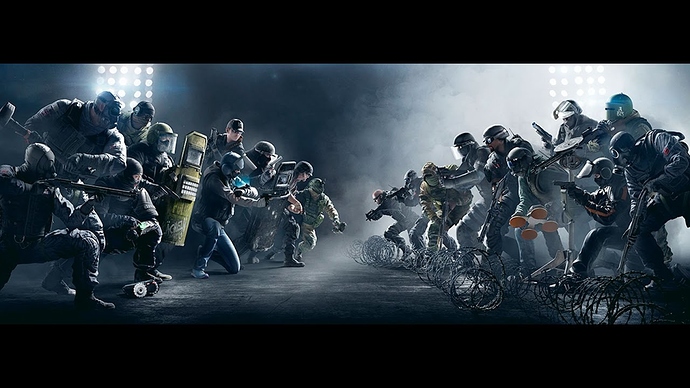 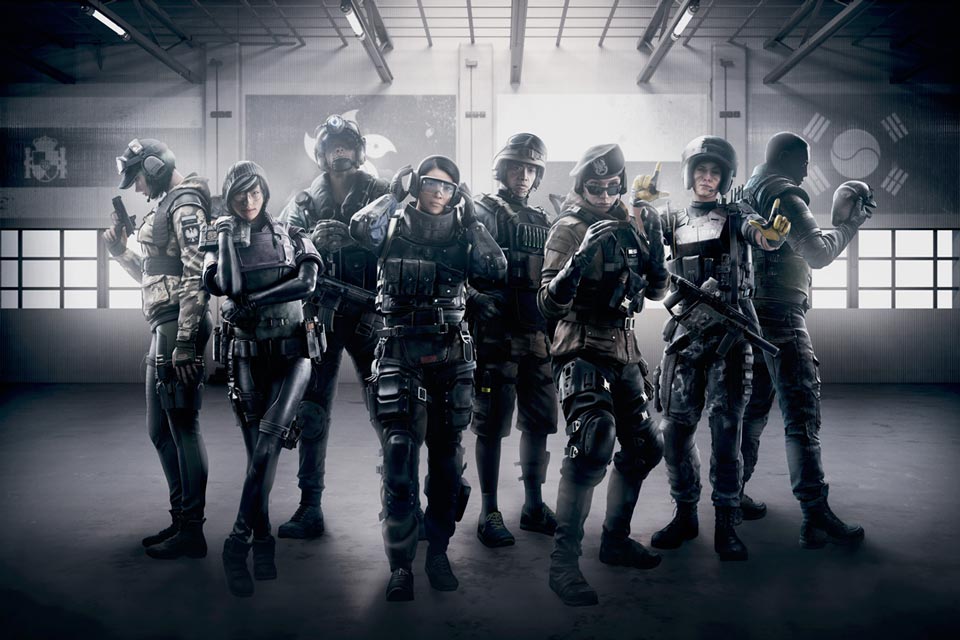 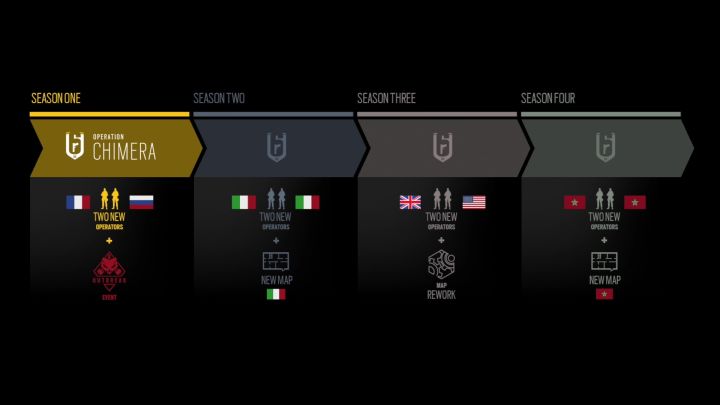 Huh, interesting. I didn’t even realize that this game had single player content.

Yup! Though I can’t blame anyone for not knowing all of the pre-release material focused on the multiplayer and the single player content only takes a few hours to complete.

Let’s pick an operator! I will be running polls to decide which operators I will show off first to you all. This first poll will be on base game attackers, what attacking operator from the following choices would you be interested in seeing? To help with making the decision here are photos of the operators along with a small description of what they do. When the update comes I will go into full detail on the operator, including their abilities, meta, history, and extra little tidbits about that. This vote will be closed when the third update is posted. 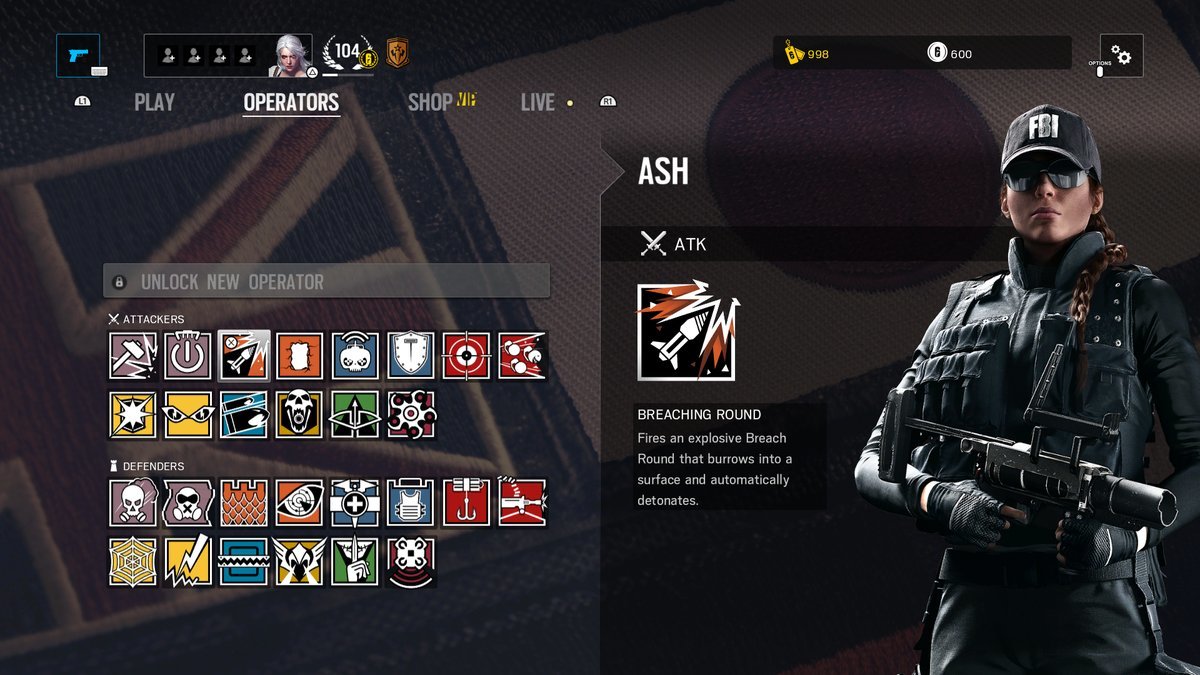 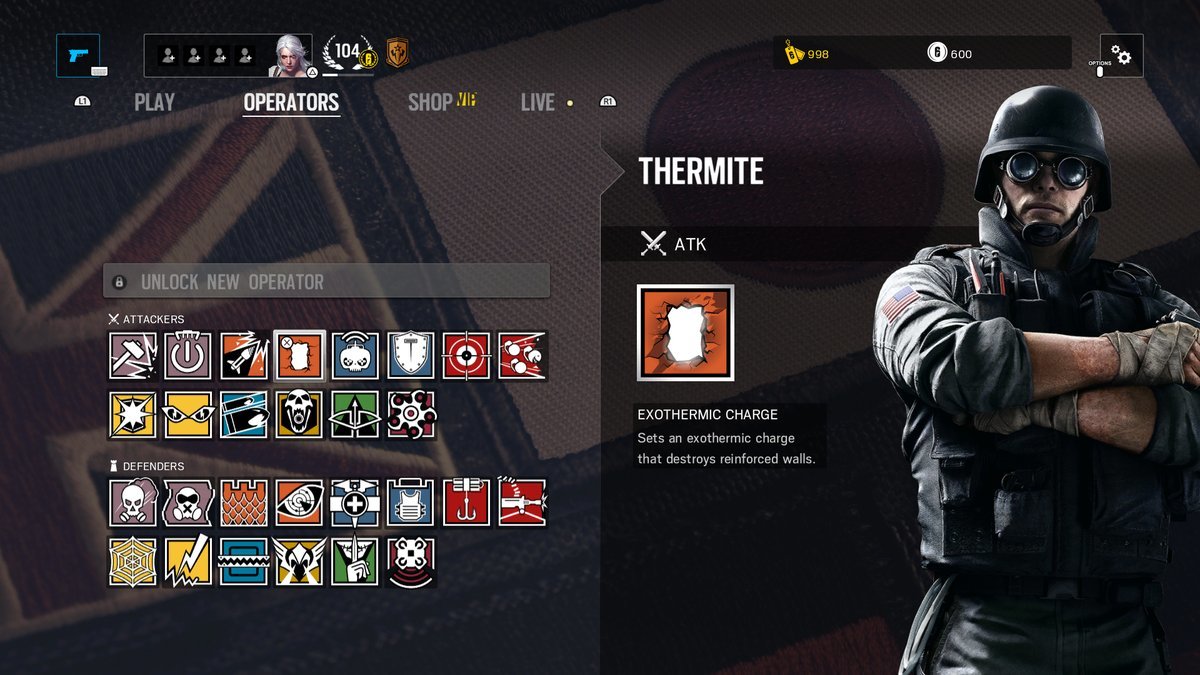 Thermite.jpg1200×675 148 KB
Thermite utilizes a thermite breaching round which can cut through steel. 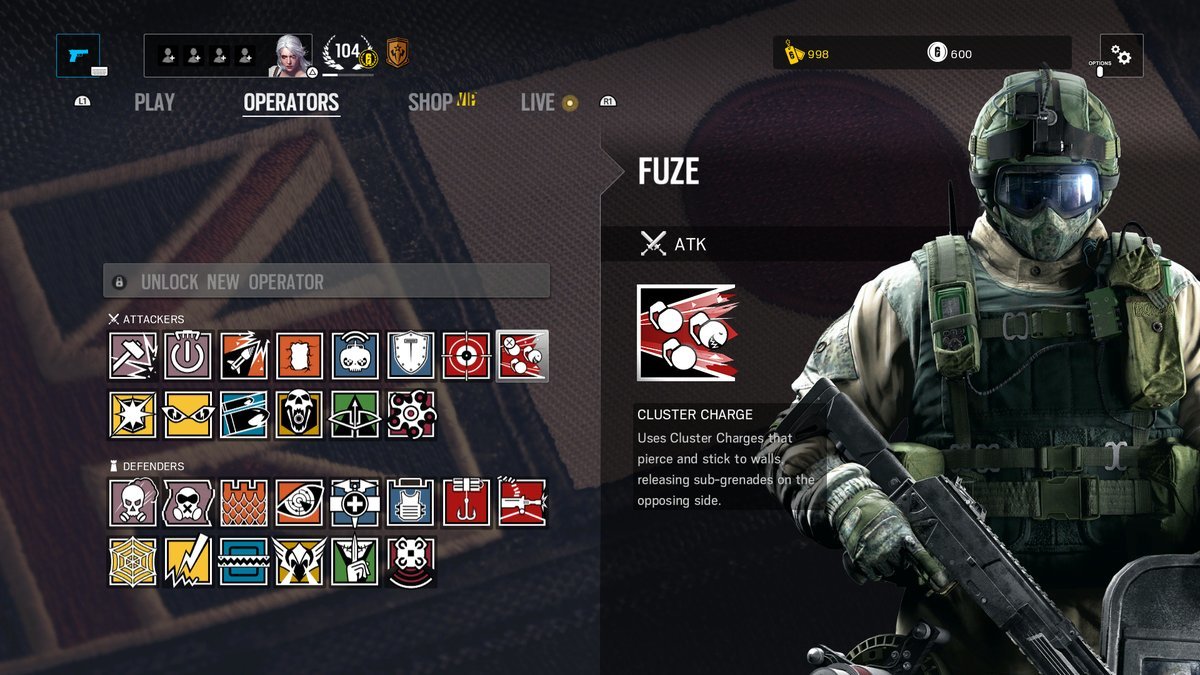 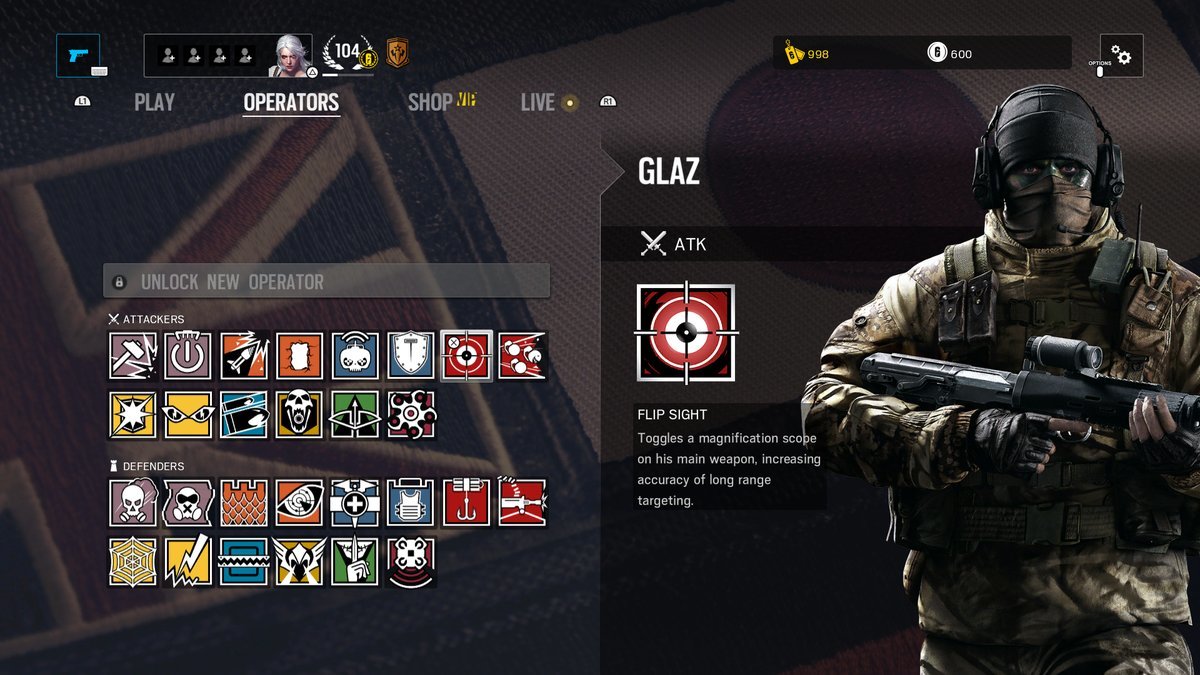 Glaz.jpg1200×675 156 KB
Glaz is a sniper with an extremely powerful rifle and long range scope. 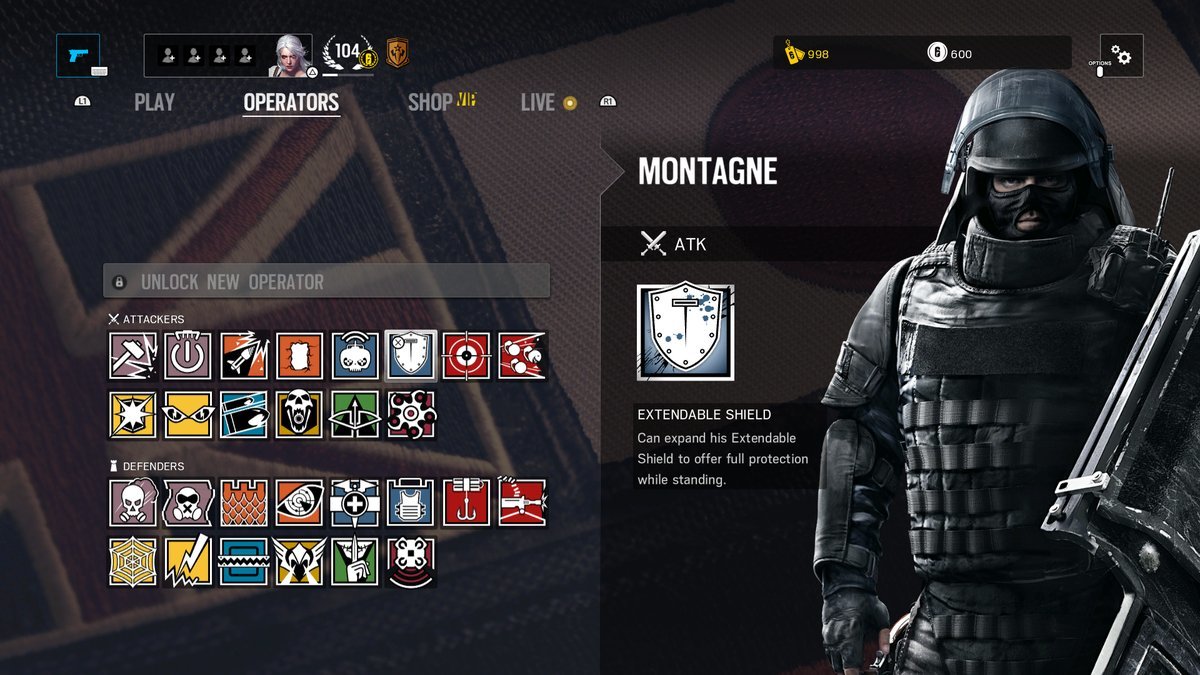 Montagne.jpg1200×675 159 KB
Montagne carries a ballistic shield that can expand to cover the entire front of him which is also resistant to explosives. 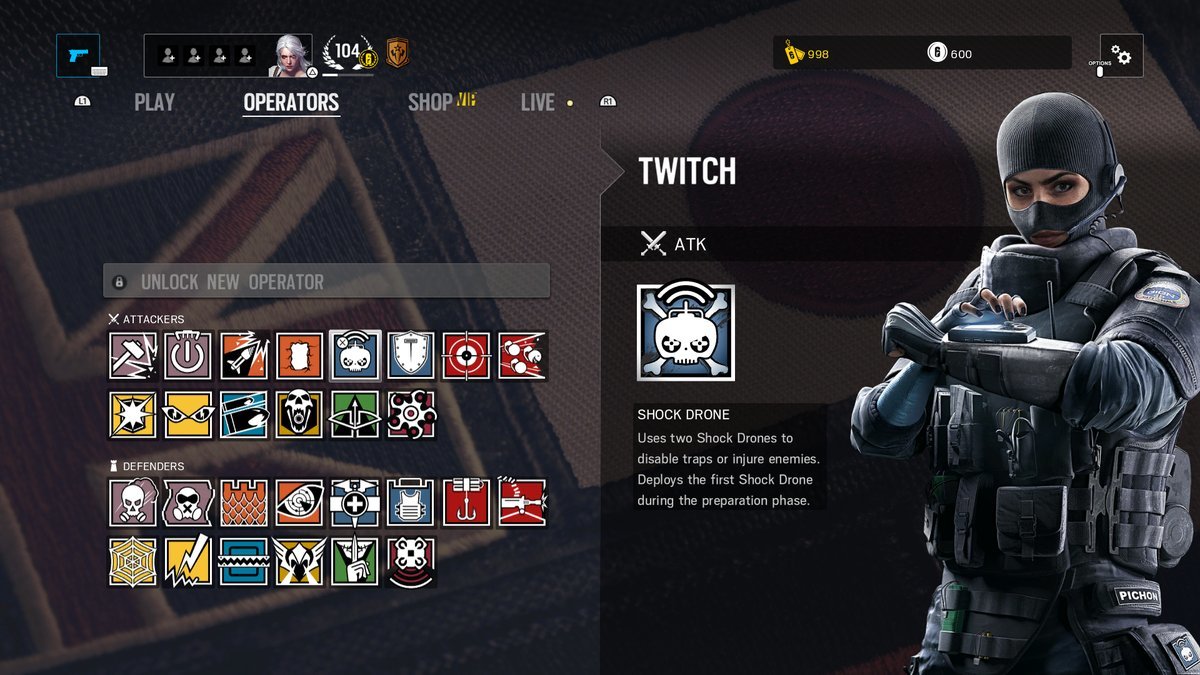 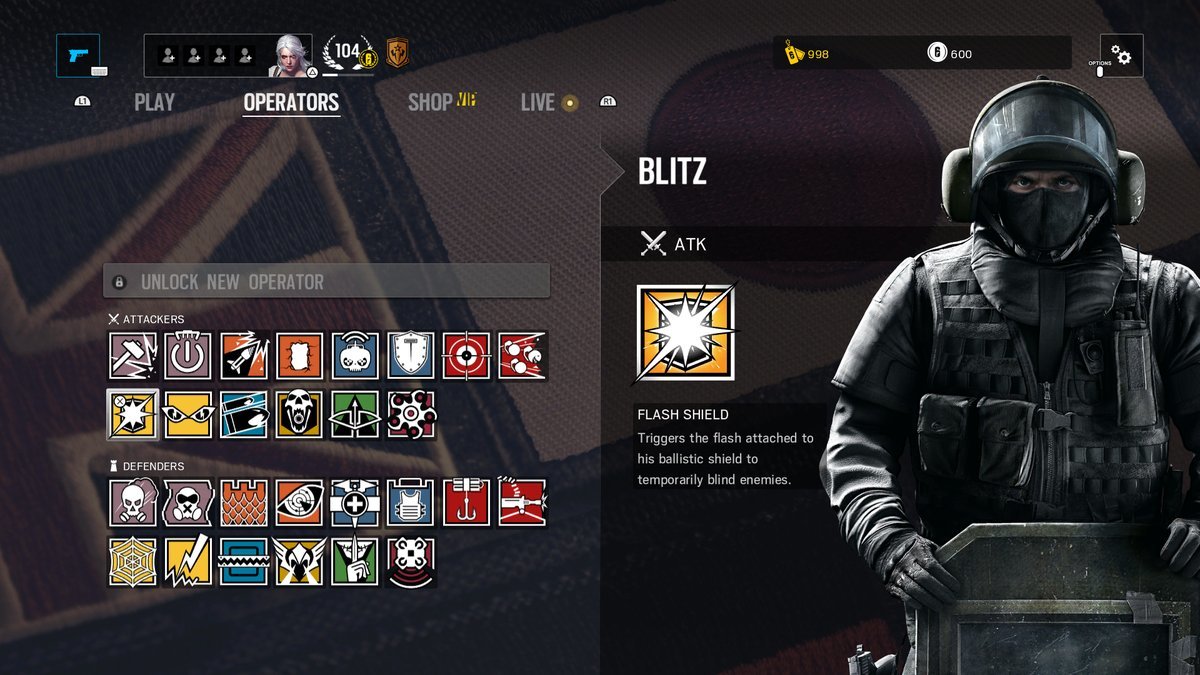 Blitz.jpg1200×675 155 KB
Blitz has a shield that can flash enemies with a bright light blinding them. 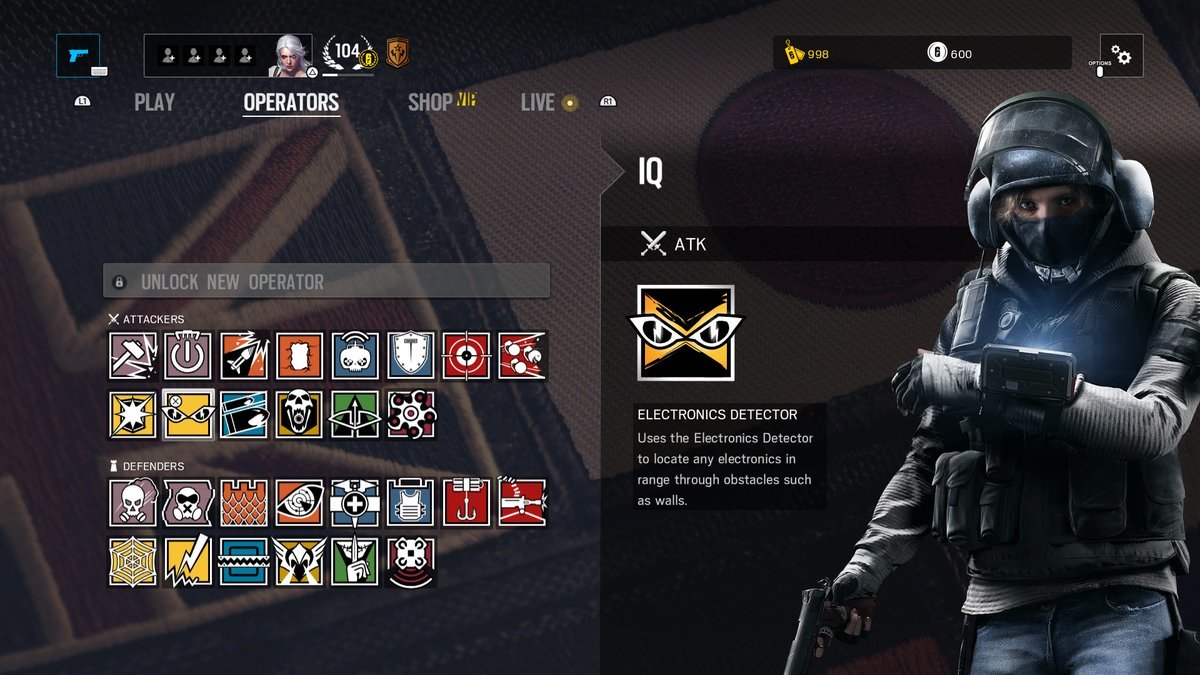 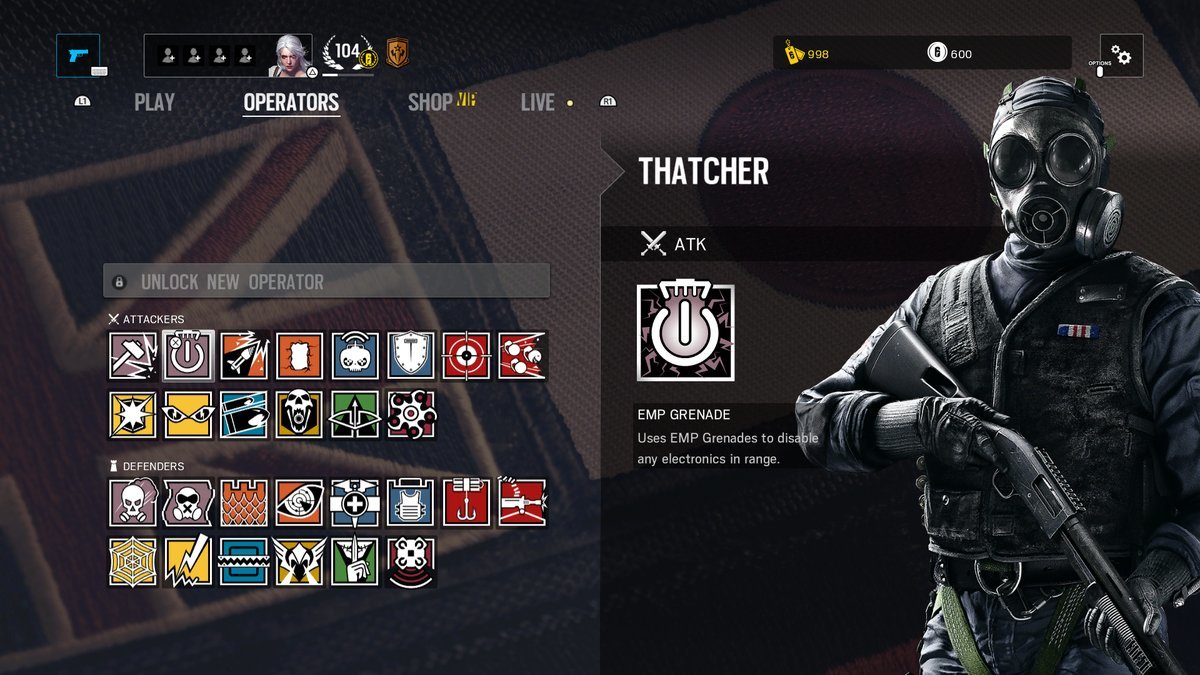 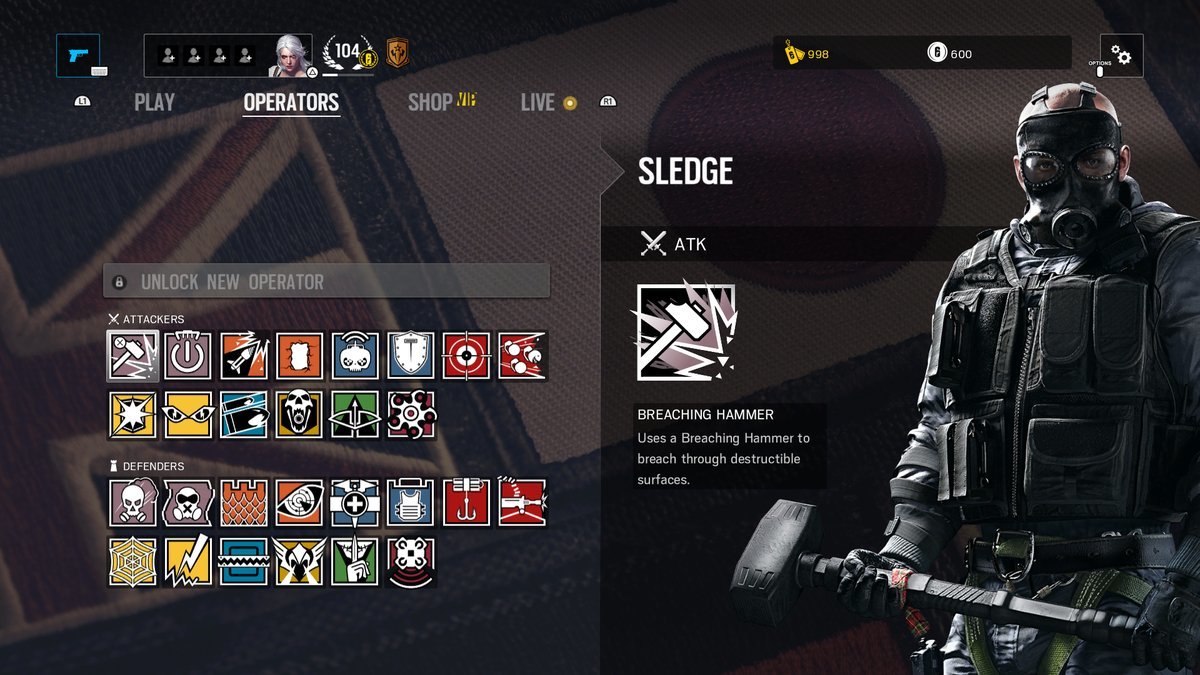 Sledge.jpg1200×675 159 KB
Sledge has a sledgehammer that can breach surfaces.

I was thinking Twitch for a second there…

…then I scrolled all the way down.

Is it possible to kill someone with the hammer?

If so please attempt to become the HAMMERMAN and dish out HAMMER JUSTICE to those villains.

I’m seeing the love for Sledge!

Also you totally fucking can kill people with the sledgehammer! It is a one hit kill in fact. It’s very hard to do but I’ll totally try for it if he wins.

You can kill people with quite a lot of gadgets in the game. Also it is possible to goomba stomp people if they’re in front of a window you repel through.

I should mention goomba stomping is super rare but hilarious when it happens. Also it is actually a free weekend right now and it’s on sale 50% off!

In any other situation I would bemoaning the fact that we lost Rainbow Six Patriots for this, but I’m not gonna argue with a game that allows you to do your best kool-aid man impression (Now with guns!) with the walls, floor and ceiling due to the destruction engine.

I too shall throw my vote in for the hammer boy.

It’s too bad we couldn’t have had both. I’d like something more to the offline and Patriots would have been nice for that.

It looks like I’m gonna be showing off hammer boy, which also means I’ll get to show off his dumb as hell Operator Video. So many of them are so unrelated to each other they’re kinda funny.

Yeah, but I learned the last time there was a free weekend that this game runs in the single digits for me, even on low settings.

Ah, my laptop would probably explode if I tried. But if you plan on getting it now would be a pretty good time since it’s 50% off. Though I’d understand being hesitant to get a game you know you won’t be able to play right away.

Not for nothing but uh is it really okay for a an anti terrorism group to use human targets for their room clearing drills?

No it’s not alright at all. Rainbow Six Siege has some pretty questionable and morally bankrupt stuff in it. Using armed prisoners for training would be I think a war crime? It is the thing about Tom Clancy that his stories were very pro nationalism and this game carries on that torch. It is one of the good aspects of the multiplayer being more contextless because it doesn’t have the baggage of the story.

It is the thing about Tom Clancy that his stories were very pro nationalism and this game carries on that torch. It is one of the good aspects of the multiplayer being more contextless because it doesn’t have the baggage of the story.

This is why I’m not super bummed about losing Patriots, because that trailer was the ultimate in skeevy.

It will be very apparent in the third update for the Bartlett University mission. That’s as severe as it gets then from that onward it will be more of a competitive vs game detached from the Tom Clancy elements. That update may be disturbing to some so I will put in additional trigger warnings for some.