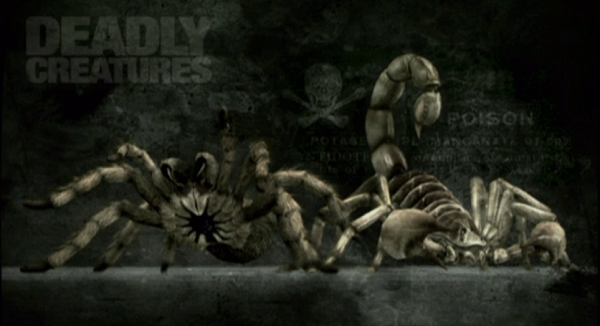 Content Warning: This game gets up close and personal with a lot of bugs, and in some potentially disturbing contexts. Check out the LP trailer for a taste of what to expect.

For decades, it has been accepted practice in media to make an audience look at a spider for a cheap and easy scare, playing off the visceral reaction felt by most due to a cultural aversion to the many-legged bugs. Video games have relied on the discomfort of arachnophobes to particular excess, sometimes going so far that their product must be avoided by those particularly affected by the fear instilled in them. Given these commonly-understood facts, it would seem that the worst idea in the world would be to make a video game where you play as arachnids. Deadly Creatures is that terrible idea.

The shock value of making the player become what they fear most isn’t the only selling point of Deadly Creatures. The use of these specific animals allows you to see the finest details of an expansive environment, their very nature allows for unique forms of exploration and combat, and the story of shady dealings by criminals in the desert is all the more intriguing when seen from their point of view. Nonetheless, I’m in it for the bugs. I love them, and I hope that by sharing my enthusiasm and knowledge, I can help you overcome your fear as I did.

Resources:
Bogleech has created a series of arachnophobe-friendly blog posts with cute drawings instead of pictures of real bugs: Spiderween

The podcast Hound Tall did an episode on entomology covering a wide array of topics and personal anecdotes from the guest entomologist’s world travels: Buggin Out! - Extreme Entomology and the Amazon (episode begins at 9:50) [NOTE: extremely vulgar]

Arthro-Pod is a podcast hosted by a rotating group of entomologists, so pick any topic on their episode list that seems interesting and you’ll learn everything you need to know about it: Arthro-Pod [CW: lots of pictures of real bugs]

Relevant videos:
Tarantula demonstrates the use of urticating hairs
Meet the spidergoats

The shock value of making the player become what they fear most isn’t the only selling point of Deadly Creatures.

AH, sorry, I missread this! I am very tired.

But yeah this game rules.

The sound effects and the jumps seem amazingly cheesy. I laughed when the scorpion lashed out with the sting in the intro with a Generic Sword Sound. I’m glad you’re providing spider facts, too!

Literally just the other day I was thinking about this game.

Joined just to say, seeing you lp my fav wii game brings me nothing but joy, can’t wait for the rest of this!

I’ve been looking forward to this LP, it’s been years since I’ve last saw this game. I remember one of the things that I really liked was just the scale of everything, it’s super interesting to me to see everything from the perspective of a couple of arachnids. It’s extremely unlikely but I’d love to see a HD version of this game with some nicer textures, play up the depth of field, etc., to really drive home how small we are.

As an aside I was once pretty arachnophobic as well, but instead of getting over it in a healthy way like you did, I got over it by waging battle with a baseball sized wolf spider that was trying to make it’s way into my bedroom late one night. After dealing with that behemoth the wee little house spiders don’t seem too bad in comparison!

Joined just to say, seeing you lp my fav wii game brings me nothing but joy, can’t wait for the rest of this!

Nice, glad you did! As much as this game is glitchy and ugly, it really is a delight to play, just controlling the synchronized motion of the eight legs is hypnotic and the subtle idle animations are fun to just watch. They did a great job capturing how enjoyable it is to just look at a bug.

I’ve been looking forward to this LP, it’s been years since I’ve last saw this game. I remember one of the things that I really liked was just the scale of everything, it’s super interesting to me to see everything from the perspective of a couple of arachnids. It’s extremely unlikely but I’d love to see a HD version of this game with some nicer textures, play up the depth of field, etc., to really drive home how small we are.

It was once all the rage to make games with tiny protagonists. The Monster In My Pocket, Chip and Dale, and Toy Story games spring to mind as examples that did stuff with scale, but they’re all adaptations. Perhaps it’s just coincidence, but there haven’t been many tiny adventures in any medium lately. Deadly Creatures might be the most recent game to fall into this niche, and we’re definitely due for something in the HD era to try their hand at it, but making this game all about bugs was predictably ruinous for sales, so it probably isn’t looking at any sort of revival, cool as that would be.

Funnily enough, my recovery from arachnophobia was also sparked by an encounter with a spider, but a much less horrifying one: I noticed a small jumping spider casually strolling across my desk, and they showed no signs of moving towards me, so I just watched as they climbed my power strip, came to the edge of one of the plugs, then leapt over to the next one. It was so impressive that I was suddenly open to hearing all the facts about spiders that got me to do a 180 on my opinions about them.

Phew. Sorry to give everyone a sample of why it took me three years to start this LP, I insist on doing it in the summer and summers are extremely bad for me. Summer is also almost over, so with any luck, I’ll be able to update in reasonable intervals from here on out. Regardless, the long national nightmare is over, meet our new bug, and enjoy the first art gallery, featuring a ridiculous 27 pictures of in-game models.

Hello Fiendly! I just decided to check out the thread and I’m really happy I did! Is that the whole concept art gallery? And I take it, is foreshadowing creatures?

This is the first of six art galleries, one will be posted with every other level (so alongside every scorpion level). It does spoil upcoming enemies, but we unlocked it in the first level, and the game opens by telling you what the ending is so they demonstrate minimal concern for the sanctity of spoilers themselves, I figured it was fine since there’s no big surprises in there anyway. And might I add, Blast Tyrant is a kick-ass album, good choice of handle.

Huh. That’s a shame because it is clever how they used the pov of a proportionally small creature to unravel the story slowly, but if its ruined right away then oh well i guess. That said, some of the creatures from the art gallery made me very excited for what is to come, they did a damn fine job on creature design in my opinion. I never got around to getting a Wii but if I did, I’d want that game for sure.

And thank you, Clutch is my favorite band, alongside greats like Tomahawk and Puscifer so it really makes a guy like me happy when someone else knows his music. Have a good day! Or night I guess…

I think of chelicerae as prehensile mustaches. Cool spider facts all around, I appreciate that you fact-check every time you get a new ability.

It seems weird that they’d block you with nondescript black fog instead of thorns, a dead end or a thousand other ways to communicate “this is impassable” they’ve already used. Does that unlock later or is it just the end of the map?

The black fog indicates a spot you can pass in a different chapter, but not the current one. The wall at the end of the log was crossed in the first level just before the boss fight against the scorpion. It’s still a weird choice given all the things they could have used, but they probably just needed an easy way to block us off.

I like the concept of “larger story revealed in parts via unconcerned POV character(s)” this game is playing around with, and I highly appreciate the added subtitles during the non-cutscene banter. Even with its occasional jankiness (thank you for editing out the loading sections, yikes) I’m invested in seeing where this goes next!

As for the game itself, how responsive are the motion controls? Are they pleasant to use or just something you have to endure for the sake of more Cool Bug Action?

Someone in the Something Awful thread neatly summarized why this method of storytelling is so great: “So is this whole game like, two background humans having some kind of Cohen Brothers Film Adventure while a Scorpion and a Tarantula have an extended blood feud?”

The motion controls feel pretty good to me. The only one I can’t seem to always do on command is the scorpion’s dash, plus it sometimes misreads horizontal swings as vertical. The biggest issues are extreme overuse for the scorpion to the point that it makes my arms sore, and overly-sensitive first person aiming in the spider’s web climbing segments, but I skipped the entire Wii generation until recently so I still enjoy the novelty of it all.

When I told my girlfriend about the way this game’s story is structured she was like “So, did they have all that stuff left over from some canceled game but were still required to use it by contract or something?” Which is probably not what happened, but is a interesting possibility. Considering when this game was released, it’s not too surprising it a story like this got greenlit.

… I was going to say I can’t imagine it getting made today, but this game was published by THQ and with all the weirdness going on with the company that now became THQ I actually wouldn’t be surprised if they release remake of this game. haha.