We Have Successfully Remembered The 90's. Let's Play Yooka-Laylee

If you aren’t familiar with me or my history with Banjo-Kazooie, Then hey! what’s up. I hope you stick around for the LP!

If you are familiar with my inexplicable infatuation with the Bear & Bird duo, You knew this was coming. You watched me gleefully collect all 190 Jiggies, 90 Jinjos and 1,800 Musical notes that are scattered all throughout the various worlds present in Banjo-Kazooie and it’s sequel, Banjo-Tooie. You watched as I damn near dragged myself through the endless slog of repeating missions and mandatory vehicles until I had collected all 131 Jiggies in the hell that was personally made for me that we know as Banjo-Kazooie: Nuts & Bolts.

But finally. After 16 years of waiting. Yooka-Laylee is here.

Yooka-Laylee is an action adventure, platforming game with a heavy emphasis on item collection. Developed by Playtonic Games and published by Team 17 for PS4, Xbox One, Nintendo Switch, Linux, Mac and PC (the version we’re using to LP the game!) released on the 11th of April this year. The Switch version was originally intended for release on Wii U but due to multiple complications, development for the Wii U version was moved over to the Switch and is due to release later this year though the date is as of yet unconfirmed.

Watching the development of Yooka-Laylee has been one hell of a roller-coaster. From initial plans to make a spiritual successor to Banjo-Kazooie from a Twitter account named “Mingy Jongo” in 2012, to the apparent cancellation of the project announced in a Reddit thread in 2014, to the reveal of Playtonic Games as a studio and their developer showcase in 2015 where I asked them a very hard question, It’s been quite the emotional journey for anyone who really wanted to see another one of them 3D Platformer games with the animals that talk funny.

The highs of the kickstarter for the game reaching over two million pounds. The lows of the backlash as YouTube funnyman Jonathan Tronathan was removed from the game. The confusion as mixed reviews came in where some people had misunderstood that this is in fact a game like an old game and not a new game, which is exactly what had been pitched since the beginning of the project.

It’s been quite a time to be a fan of Banjo-Kazooie and see all of this unfold over the last 4 years. But now finally, the game has been released. I have spent a considerable amount of time playing and 100% completing it and am here to tell you my thoughts and feelings. This game is not perfect, not by any measure. In fact, it is plagued by the same issues that we repeatedly saw and fought against in games as young impressionable children growing up with the millennium looming on the horizon. The agony of “wheres that last thing I need to finish this level WHERE IS IT”, The frustration of repeatedly trying to complete that one task/mini-game, and the old fashioned camera that is seemingly controlled by another player who is laughing as you attempt to make a difficult jump.

But even with those grievances, comes endearment. The world is charming, cheery, bright and colourful. The music is excellent. The characters are distinctly Rare characters, and the puns are unbearable. It’s familiar, but not too familiar.

It’s almost exactly the game I’ve been hoping for over the last 16 years. And honestly I’m very happy with what I got.

It’s really nice to hear someone be positive about this game! This definitely seems like a game that escaped the 90s.

after hearing so much negative stuff about the game, jumping into it with Dex was kind of a shock? i was expecting a hot mess, but all we’ve seen so far has been super cute and pretty slick!

we say it in the video, but the worry is that it’s TOO faithful to the old games, and it might get kinda overwhelming with stuff to do…but that’s why we’ve got an expert doing all the jumping, instead of me. i’m really excited to see where the game goes, to be honest!

I have completed about 75% the game myself and liked most of it except the boss fights. It will be fun to watch someone go through it who is better at the game than I am.

I loved most of the worlds and most of the controls apart from the inescapable ice physics (This isn’t spoilers this is a Rare game and/or a 90s Platformer.) and I am looking forward to going forward with playing through it again on PC when the post-launch DLC is completed. (I kickstarted the PC version and bought a separate physical PS4 version since my PC isn’t up to snuff to play yet.)

So, because of that conversation about the number of puns in the game, would you two say that Rare have become… dadlier than ever before?

I can’t believe the VND in VNDLP stands for Verified New Dads.

I am of the opinion that this game is bad. It has issues that even its spiritual predecessors didn’t have, especially of design and signposting.

I did not enjoy this game. It’ll be interesting to see a mostly positive LP.

Having only played the first level so far and rage quit just from trying to fight the first boss, I’ll let your LP take the reigns for me. Seems like a game without a consensus.
Also always nice to see Dani about.

Edit: I finished watching both videos now - On the voices there just needed to be volume control.

Mini update here before we continue our adventure on Wednesday!

So remember that big patch I talked about in episode 1? well it dropped today! that means that every new video from episode 4 onward will be post-patch! I haven’t had a chance to get into it yet and see all the fixes and updates for myself but if you’re curious to find out about what was fixed/changed before episode 5 rolls around, you can take a looksie at the patch notes for yourself!

That’s all for now! I look forward to you all seeing the continuation of our silliness tomorrow!

is the most quality of life improvement. I do like they added a voice volume control because it might be my TV/speaker set up but the voices were too loud for me (But I won’t be using the Y button unless I decide to try a casual speed-run of the game.)

We’re finishing off Tribalstack Tropics and forgetting all of the games the Rare co-founders made before they formed the company in today’s episode! 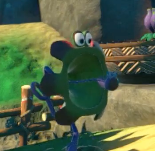 The part of Yooka’s head that glows you was struggling to name is his Frill.

I only know this because of Jurassic Park 2.

It’s time to check out the 2nd world: Glitterglaze Glacier! We sculpt a statue with explosives and take on the dreaded Snowplow…

“A half-arsed job is better than no job.” is a better slogan than May’s actual campaign with her current coalition of CHAOS (control.).

Since the Parliament hasn’t collapsed yet and May is still the shit-magnet for Brexit. The joke will still be relevant for the next maybe two years…unlike David Cameron put his penis in a dead pigs head which will be timeless.

Edit: Actually I have a question for you semi-related to what this let’s play stands for. The 90s Platformer - With the Crash Bandicoot port coming out was it something which you were into as a 90s Kid or were you just an N64 boy?

You handled that fairly well. The snowplow does not move good, even when taking it slow.

ahh our house was a Nintendo Only Zone for a number of years it was my friends who owned Playstations and they lived fairly far away so I only got to play Crash and Spyro a limited amount of times in the 90s. I did play them and did have fun with them but I only ever owned Nintendo consoles growing up so yes I was less of a Tru 90s Kid and more of a rabid Nintendo fan (which is still true honestly) though I did play Rayman 2, a demo for Tonic Trouble, Heart of Darkness and some of Croc on PC! I also played a lot of Riven with my Dad before a guide existed online, we made it through a good chunk of that game and had like a binder full of notes and diagrams we made together before getting stuck.

I also played a lot of Riven

Dex guiding Dani through the Myst series would be fun.

It’s time to round off the first half of Glitterglaze Glacier, do our first Minecart section and talk about how amazing regional accents are in Britain