First up, do threads get pages here, or is it one long single page thread that loads in more posts the further you scroll down? I know there’s a progress bar for threads and the forum lets you track where you left off in threads, but I’ve always really liked having pages. I guess it’s just a mental thing. Makes it easier to have a good stopping point, etc. Also helps when there’s a lot of embedded videos in a thread.

Next up, I feel like the separation between posts is a little hard to see at the moment. This kind of ties in with JetGrindFuture’s thread requesting a night mode. I feel like there’s not enough contrast at the moment and one post kind of bleeds into the next.

I feel like the separation between posts is a little hard to see at the moment.

The separation bars could definitely do with a tweak, they’re extremely faint.

Agree with this and JetGrindFuture’s post in tandem. Not to emulate Something Awful too much, but its usage of different grays (to discern between posts) and the dark blues (for certain accents like usernames) are a pretty solid tactic for breaking up the brightness. Maybe using similar grays and the reds from the logo (which btw, I love, it’s sooo cute!) would provide some more visual ease as well as making the forum feel more “branded,” in a way?

I’m no graphic designer though, @ChipCheezum would probably have a better insight to that stuff than me!

I would also love it if the avatars were a bit bigger, but that’s a low-priority complaint!

This might answer the issue of keeping track of where you left off, but the page seems to auto-jump down to the first unread post on a thread.

One of our goals when we get some spending cash is to hire someone to give the forum a proper visual overhaul. This will include colors, the little dividers between posts, etc. We’ll put all your suggestions on the list of things to look at when we get to that point.

Also re: wottermelon’s post, yeah, the site should automatically take to your most recently read post. You can also click on “show more” under each person’s post to find an option to bookmark a certain post you want to return to later. You can then click on the bookmark icon next to the thread title to take you directly to the bookmarked post. (I’ll probably add this to the FAQ as it’s not an obvious feature but very important for reading LPs)

I’m also more of a fan of traditional page-by-page thread navigation, mainly because endless scrolling, single page design typically causes things to slow down in browsers, unless that’s been solved with more powerful computers in the last six or seven years and I’m just using old hardware. I imagine threads filled primarily with text would be less of an issue than an image and GIF-heavy Tumblr blog (the other common use of single page design), but having the option would be nice if possible; Chrome already likes to eat through resources, and I feel like long threads would start to chug a little.

Bigger avatars would be nice - I don’t usually wear my glasses for casual browsing, and I can size up the text to a good size that’s readable without a single word taking up half the page, but at that size, avatars are still a little small to easily make out.

We’re currently solving for the design-related aspects of this thread, but as far as the “long threads cause heavy load” issue @frozentreasure mentioned - that’s not an issue with this forum software. Discourse handles long threads by pre-loading some posts below the post you’re currently on and unloading the posts above you to reduce impact on your computer. If you’re in a particularly long thread, you can scroll up a few posts and watch as the forum loads those posts back.

Regarding the “page” issue - that’s a mental thing I had to adjust to as well. Ultimately I like Discourse’s way of handling it - it’s more flexible and useful for jumping to new or specific content quickly, especially on mobile. If we’re still not liking it after a while, I’m open to adjusting it when we get enough funds for a forum overhaul.

I’m not sure if it’s just this monitor’s display but the big buttons (save, login, reply, etc) are really hard to see and I’ve had to fish around for them.

Could you provide a screenshot of what you’re talking about? That could be a simple fix.

Speaking of layout, the top level page on mobile might need some condensing. 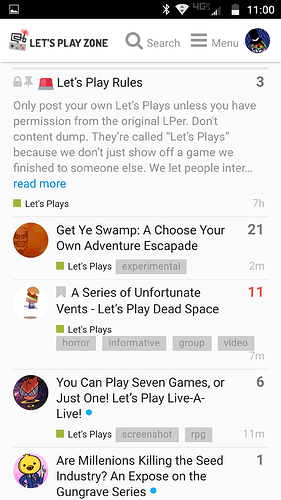 Speaking of layout, the top level page on mobile might need some condensing.

That is an interesting problem! I’ve checked it on my own phone, looked at it with some web development tools and it’s just floating there!

While I’m not sure what’s going on there, I’ll check it out and hope to have an update to fix it soon!

Very odd - I’m getting the same issue on my end too @hawk16zz. @Law thanks for looking for a solve!

The problem with the floating stuff has been fixed! A very interesting thing happened where an error message would not be displayed, but caused the content to be pushed about, making that layout in the screenshot you captured.

This should no longer be a problem, but it did cause a little extra design issue which has since been resolved:

Just thought I’d let you know I’m seeing a CSS error when I go to a category or subcategory on mobile. Here’s some screenshots. [image] [image]

Discourse writes any customisation errors on the page, by writing a rule like this:

This was not being displayed on the page, but the fact it was there caused the content to be pushed around. The error itself refers to the embedding of Google Analytics, which uses a bit of JavaScript to load. It uses a different customisation section, so it shouldn’t try to load it as CSS, but Discourse tries to anyway, and hence that rule is written.

Interestingly enough, to fix the layout, I ended up writing this rule here:

Browsers will typically ignore large sections of white space that is written in HTML, ignoring when a person adds a lot of spaces or tabs or line breaks. Before, it was white-space: pre, which meant preserving any additional line breaks and space characters, causing it to break our layout.

Doing that caused a different issue, as brought to our attention in the thread above. The solution to it showing up at the bottom was to simply make it not appear at all:

This could equally be substituted for display: none, but solves that problem too.

Looks great @Law, you are the definition of good peoples. 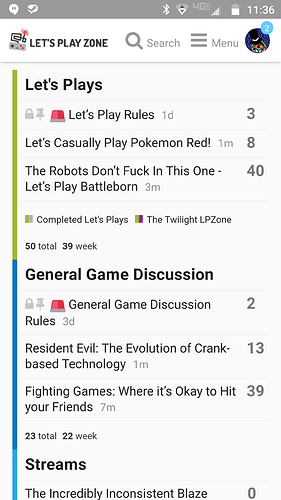 We’re currently solving for the design-related aspects of this thread, but as far as the “long threads cause heavy load” issue @frozentreasure mentioned - that’s not an issue with this forum software. Discourse handles long threads by pre-loading some posts below the post you’re currently on and unloading the posts above you to reduce impact on your computer. If you’re in a particularly long thread, you can scroll up a few posts and watch as the forum loads those posts back.

Regarding the “page” issue - that’s a mental thing I had to adjust to as well. Ultimately I like Discourse’s way of handling it - it’s more flexible and useful for jumping to new or specific content quickly, especially on mobile. If we’re still not liking it after a while, I’m open to adjusting it when we get enough funds for a forum overhaul.

So, theoretically, Discourse should unload posts above where I am, but when actually using the forum, it doesn’t seem to be doing so. I just went into one of the SSLPs posted to check and even browsing through at a fairly slow pace, I pretty quickly reached 2 GB of memory usage on my browser with no sign of it going down until I actually closed the thread entirely. When I scrolled through the thread quickly, my memory usage actually got high enough to crash my browser, something which I was able to repeat on testing. This is a problem I have with endless scrolling on basically every other site that uses it, too, so it’s very frustrating to see it here.

What would be a good compromise, if it’s possible with Discourse, would be to have pagination be an option that can be enabled in user preferences. Not only is it better for memory usage, I know a lot of people find pages more readable when broken up.

One other issue I’ve had with the layout of pages is that there’s no way to see at a glance when the original post in a topic was updated. You can mouseover the number of edits to see it, but it would be much handier if that info was in the open rather than hidden as alt text. That’s one feature from SA that I’m sorely missing here, as I used that all the time to see quickly when an LP had been updated. I tried to hack together a Greasemonkey script to pull the info out of the alt text and display it in place of the number of edits the post has had, but unfortunately, my Javascript is pretty weak and I couldn’t get it working.

If you aren’t adding a page mode, would it be possible to let each user decide how many posts are preloaded when reading a topic? Because my laptop start choking real heavily whenever I try to read a Screenshot LP thread since it tries to load up a whole lot. Because even if the unloading works(which it doesn’t for me without reloading the thread) having a to high hard coded value really makes it difficult for people with not that powerful computers to browse, I’d rather have to load more often than have my computer lock up for a minute while others may have computers that can handle it.

Don’t know if such a thing would be feasible to code in, but an option to “hide” a long post behind tags so that it doesn’t load unless the user clicks it would be a great way to handle SSLP updates, plus it’d make checking in on the thread easier.

Either way though I think I’ll start using them for my SSLP updates, so thanks!