There is Another: Let's Play AM2R 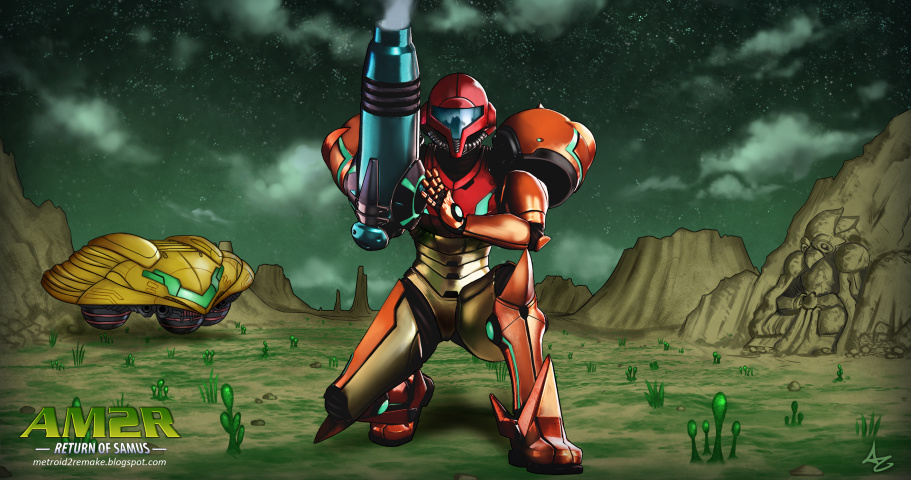 In development for 10 years and released August 6th, 2016, AM2R stands for Another Metroid 2 Remake. See, back when it was being developed, the concept of remaking Metroid 2 was fairly popular, and AM2R was simply one of many aspiring attempts to reimagine the Game Boy classic; hence the name. Over time, the various others creating their own spin on remaking this title quietly vanished, and all that remained was AM2R, the “Another” part of its name simply a reminder of the age it all began.

It is the same game, and yet it is not. It embraces the old and the new, and everything in between. And it is a wonderful Metroid experience.

The game was crafted with a clear love and respect for the franchise. It understands what makes Metroid feel good; it plays, in my eyes, the best out of any 2D Metroid out there. It rewards curiosity and has many devious secrets to be uncovered. The music is top-notch. It truly is a Metroid game, through and through. And out of all of them, it may just be my favorite.

Much like with Zero Mission, I’ll be playing through the game on Hard mode, which does pretty much the same things as in ZM (with a few minor other tweaks), and collecting 100% items. I’ll also be attempting to show off some of the Logbook texts without interrupting the flow of the gameplay (well, trying my best not to interrupt it anyway).

With that; let us begin.

Cool, just got done with your Zero Mission thread in time to jump in for the ground floor on this one. The intro to the game was great.

Wherein, standing in thorns is safer and more strategically sound than you might think. Episode 2 is up now:

I loved how hyped you were about both AM2R and Samus Returns in your other videos, so I’m really glad you’re giving AM2R a full LP treatment! I beat the game once, but I never checked to learn about the different charge bomb configurations, so when I started from episode 2 and saw you doing a quick bomb jump, my jaw dropped. (It would’ve helped, too, I never learned bomb jumping beyond two jumps in MP.) So many little things.

Time to scour the Hydro Station of all its goodies, and I guess fight a boss or something along the way, probably.

I love watching these, but for some reason I could never get into the various Metroid games. It’s weird considering I’ve enjoyed tons of Metroidvania style games that have come out since. Maybe its because I never played the classic Metroids back when they first came out?

I’ve never had a NES or played Metroid 1 or 2 beyond the first few minutes because the controls and the lack of automapping sucks, so nostalgia is at least not a factor for everyone. It did take a long time for Super and GBA Metroids to click for me in particular, because I was pretty bad at action games as a kid.

Re: video, AM2R really throws a lot of goodies at you fast. Maybe it’s because having a game be about killing dozens of Metroids already kind of undermines the “kill boss -> get item” model.

The Hydro Station is finished, and afterwards, it’s time to head out to new territory…

Lots of good things in this video. I’ve heard complaining about Chorizo Torizo demanding you to understand the Space Jump pretty well literally minutes after you get it, but in my (Normal) game it felt like it was just forgiving enough, with the low damage and the pickups, to work. I spent a lot more time on the platforms than you did. Skilled movement in AM2R is really great to just watch, even before Space Jump!

I appreciate that you can just run away from a Metroid fight if you run out of missiles. I think it’s a throwback to M2? It also works well thematically, since in M2, you’re the aggressor. I’ve beaten SR recently and there’s a ton of little things affecting the overall feel that that game does differently, most of which don’t come up until much later.

Hey, a video! I think I’ve heard of those before.

I appreciate that you can just run away from a Metroid fight if you run out of missiles. I think it’s a throwback to M2? It also works well thematically, since in M2, you’re the aggressor. I’ve beaten SR recently and there’s a ton of little things affecting the overall feel that that game does differently, most of which don’t come up until much later.

Yeah, the big change in SR is the Ice Beam actually being useful against the various stages of Metroid (some more than others), and the ability to get drops in most fights. Since both M2 and AM2R leave missiles as the only way of actually dealing with Metroids, being able to run away is a downright necessity; not so much in SR, though I recall there being a few instances later where fleeing via hidden passage is possible. So I think the big difference in feel there is “I have to be careful with my resources”* to “I have to be careful because the big boys can kill me three times over without a second thought”. Even then, Ice Beam feels more like a desperation weapon on the lategame Metroids than anything else, and I kinda like it that way actually.

It’s time for, believe it or not, the final Breeding Grounds! But we’re far, far from close to done…

I never noticed where exactly the music changed during my playthrough. It’s probably the best moment to do it, too! Fighting two Alphas is not even that big of a deal (though I think they were tougher than usual? One took your super missile and kept on kicking), but from that point on you start wondering when the game will throw two Gammas your way.

You’ve gotta wonder sometimes just what goes through the Chozo’s heads when they’re designing a lot of their technology. Is building a giant orb of destruction necessary? No. Did they do it anyways? Oh, absolutely.

It’s a Christmas Eve Eve miracle! A video! Thank ol’ Santa for this one.

In the end, it wasn’t Ridley that was Samus’s greatest foe, rather it was poorly-designed Chozo doors.

This is such a cool sequence. I’m pretty sure the time limit works on a per-room basis or similar, judging by how progressing makes it fill up faster? Regardless of how it’s done under the hood, it’s really well designed for stressing you out.

It’s time to take a moment and do some backtracking to… a very special area.

Oh man, I never caught half of these Fusion references, including the very inconspicuous frog room. That’s why I watch this. It was still cool to see traces of other expeditions to the planet. Thoth may be new content, but it felt really natural and logical to have it here.

It’s time for some original content (that’s actually required this time), and one of my favorite tracks in the game.

*may or may not actually be miraculous in nature