The Manga Thread: Who Has Time for Moving Pictures?

While I’m an unquestionably horrible weeb, I’ve never really been much into anime. A lack of availability as a kid and being a frequent visitor to libraries meant I consumed far more manga than anime, and this has continued into adulthood. So I figured it was worth having a dedicated manga thread! Feel free to discuss and recommend whatever manga you’re currently into!

CLEARLY MARK AND LINK NSFW CONTENT
Sometimes manga has a tit in it! It happens! If you’re going to post anything with nudity, gore, or otherwise NSFW material, please be considerate and let people know that a link is NSFW/why it’s NSFW.

DON’T POST LINKS TO SCANLATIONS/PIRATED MANGA
The people who make and publish this stuff need money to continue bringing it to you, and we should always strive to encourage people to pay for manga. That means no posting links to scanlations/scanlation sites, or any other form of pirated manga. It’s fine to discuss unlocalized/scanlated works, or discuss scanlations, but always try to post links to legal methods of obtaining manga.

BLUR AND MARK SPOILERS
I’m not gonna chew anyone out over spoiling some really old, well-known series. But please use spoiler tags when discussing more recent manga spoilers, and make it clear which series you’re talking about.

DON’T BE A CREEP
Shouldn’t even have to explain this. Just… use discretion when posting, and always think twice before you post. There’s a lot of cool stuff out there, but there’s also a lot of creepy stuff. We really don’t need more of the creepy.

Only really reading one manga right now and it’s My Hero Academia, I used to read a lot more of it when I was younger but now it’s all anime for me. I’m also reading Vigilante - My Hero Academia: Illegals.

Thought I’d share some manga I’ve been into recently: 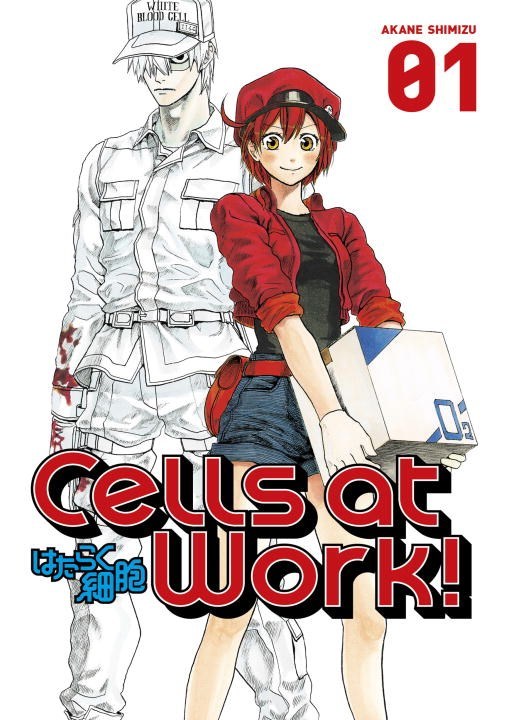 9781632363565_manga-cells-at-work-volume-1-primary.jpg506×720 87.5 KB
A rather cute and informative series about anthropomorphic cells doing their work within the human body. Sorta like Osmosis Jones, but without the shitty parts. Currently being localized by Kodansha, you can buy it in paperback or get it digitally. 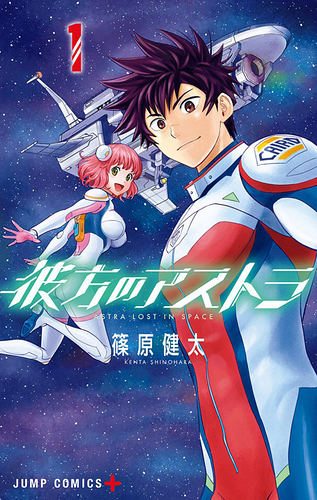 tumblr_inline_ocqby1xrjE1qmuy32_540.jpg515×810 200 KB
A recent favorite of mine, Astra is a surprisingly well-done Sci-fi manga about a group of students slowly trying to make their way 5,000 light-years to home. It’s got great characters, well-done alien worlds, and has recently jumped to the top of my “must-read” list. Viz is localizing it and posting it for free on their website.

Sweet Dreams in the Demon’s Castle

SD2.png807×609 302 KB
A comedy series about a kidnapped princess who just wants a good night’s sleep. Features numerous funny riffs on RPG tropes, a princess sadistic in her ignorance, and a fairly large cast of colorful characters. Not yet localized, but being scanlated.
1 Like
Unpronounceable February 20, 2017, 4:53am #4

One of my favourites in recent memory is A Silent Voice. Shoya is a bully. When a girl, Shoko, transfers into his class, he starts bullying her because she’s deaf. It gets so bad Shoko has to transfer out, and Shoya takes all the blame. The story follows Shoya, as he comes to terms with what he did, and trying to make amends. It’s a really great coming of age story, and the whole thing is available digitally, in print, or to read online at Crunchyroll.

The story has central themes of bullying, depression, and suicide.

The only manga I ever read recently was “Pet shop of horrors” cuz they only made 4 of the stories into an anime. now then if your gonna go read it be warned

The owner of the petshop simply named “D” gives people mystical pets in it and makes them sign a contract (usually not always heck sometimes he just gives them a regular pet) this usually ends very badly for the person. so it’s defiantly not work safe.

Other than standard stuff like Mob Psycho 100 and My Hero Academia the main cool thing I’m reading is Helck. Helck is an extremely good manga about a very strong man named Helck and the effects he has on the world.

I’ve been reading Astra and also occasionally popping in on UQ Holder! to see if it’s gotten better (it kinda has because Yue and Nodoka showed up, although the monthly release schedule is making it hell to wait)

Planning on getting Viz’s release of Gundam Thunderbolt, but I wish they’d do a digital release because my shelf space is limited. I also want to read Berserk but it’s only available legitimately in print and I’ve been to the house of someone with it up to around volume 37 or so; needless to say it’s going to be a hell of a collection and the fact that random volumes go out of print doesn’t help.

Iiii’ve been keeping up with my daily yuri intake. Inugami-san to Nekoyama-san is really good and you should read it. 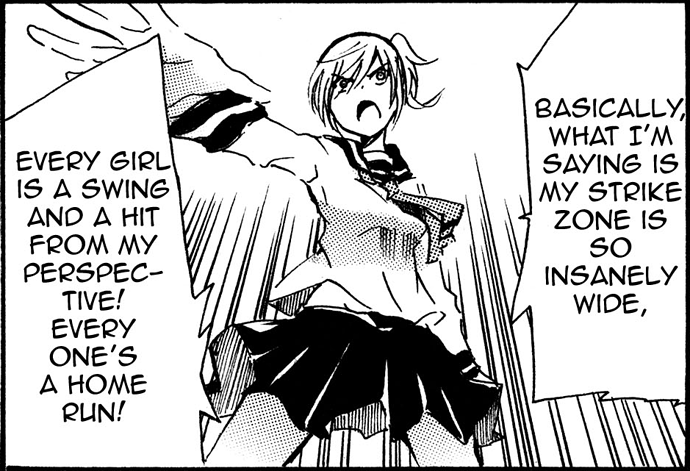 Been keeping up with Jojolion, mostly. It really started to pick up now that it’s more or less past the halfway point.

I have way too many I’m reading right now, and since I’m a weird print purist i only really read stuff if I can get it in physical.

Currently I’m on a Satoshi Kon stint so I just finished reading Opus (which is excellent btw) and Seraphim 266613336 Wings which was a half finished project he did with Mamoru Oshii. Then I’ll probably finish reading Akira (those volumes are expensive and also huge) and then Pluto.

Just started reading Helck, and it’s pretty good! Been noticing a lot more stuff in that vein lately (OPM having a similar premise of an already-ridiculously strong protagonist just doing whatever).

Iiii’ve been keeping up with my daily yuri intake. Inugami-san to Nekoyama-san is really good and you should read it. 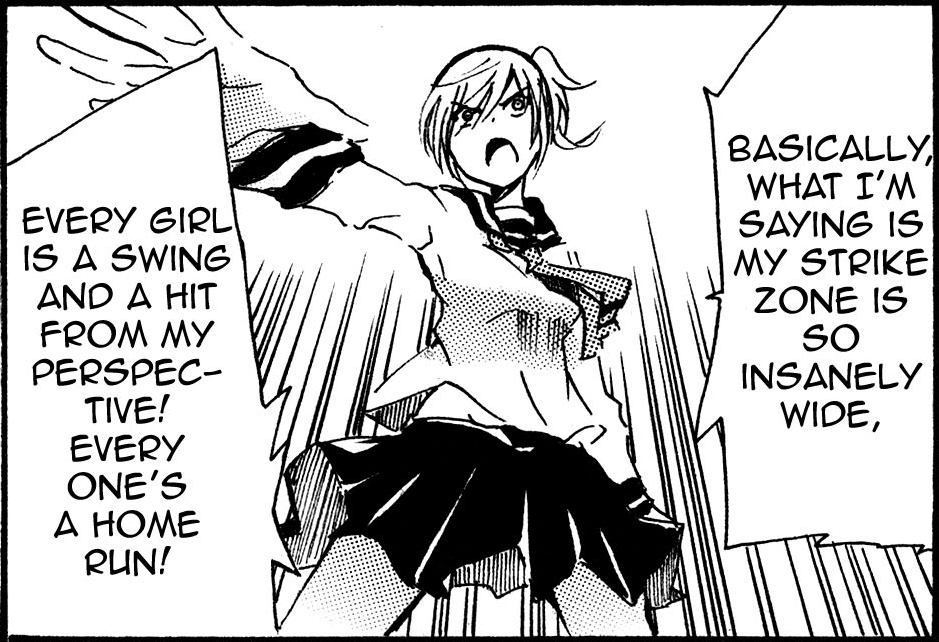 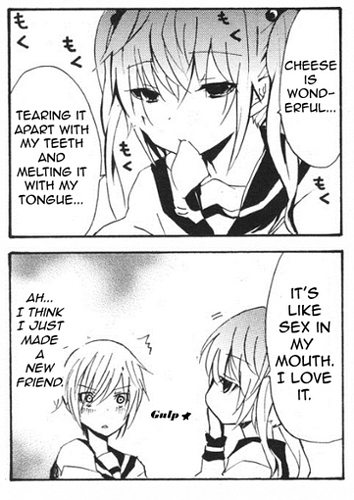 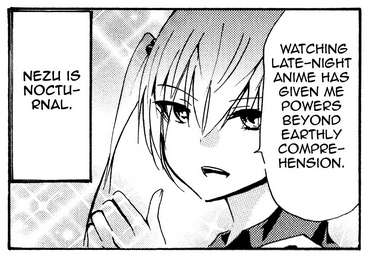 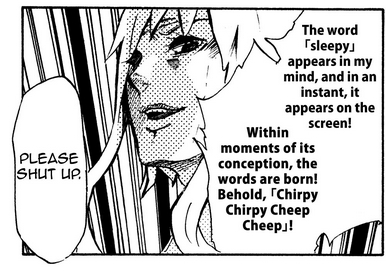 Gonna toss another Yuri recommendation onto the pile and say you should read Dark Forest, White Road. It’s a very good and melancholic series about a blind girl and a girl suffering from depression and isolation. 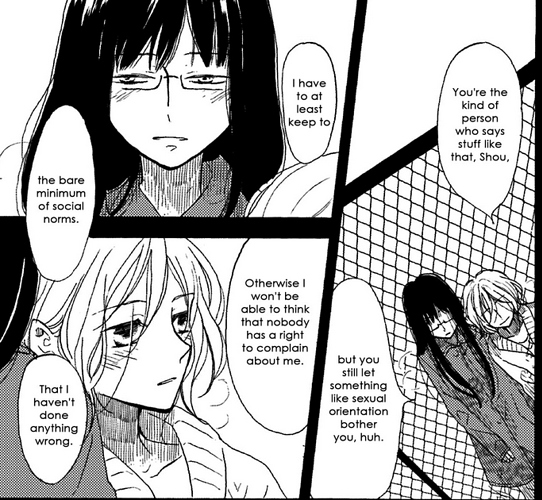 For something a bit more light-hearted, I’d suggest Kase-San. It’s a fairly cheery and funny series about an airhead named Yamada falling for the star of the school’s track team. 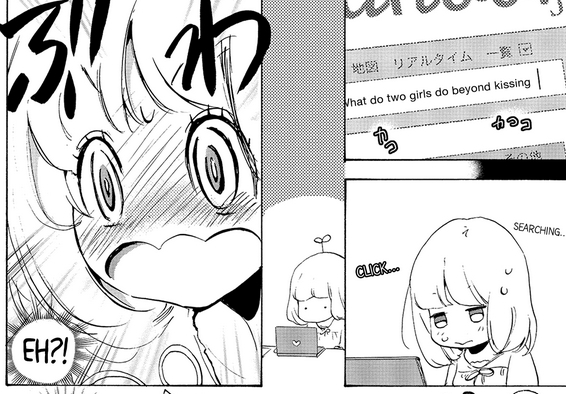 Also Lonely Wolf, Lonely Sheep is my favorite yuri series ever. A short series about two girls with the same name, going to the hospital for the same reason, who have birthdays one day apart. 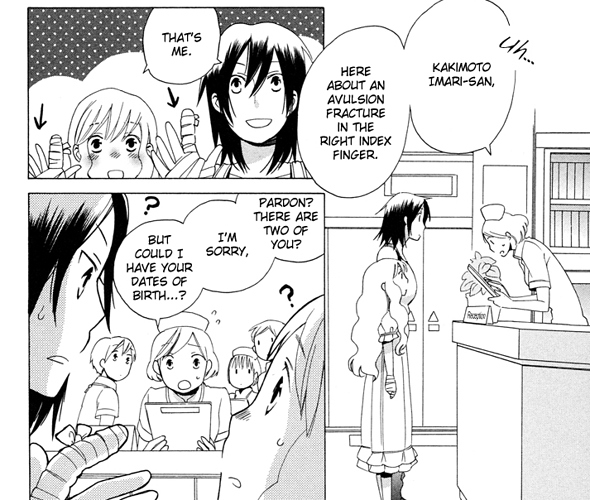 Then I’ll probably finish reading Akira (those volumes are expensive and also huge) and then Pluto.

Pluto is great, and as someone who’s a huge fan of the series it’s based on, I was really stoked to see an alternate take on it. Definitely also check out Monster, if you haven’t already.

As for print stuff, I’ve been really into The Ancient Magus’ Bride lately. Currently being localized by Seven Seas, it’s definitely one of my favorites in terms of fantasy manga.

CCS was my favorite when I was a wee lass. I was so excited to see Sakura and Li again in Tsubasa: RC, but that manga ended up being … a really convoluted disappointment, in my opinion. This new CCS, though, it hits all the right spots. It has the same charm as the old one, and the art is cute and gorgeous. And the plot is about new cards!! New mysterious robed figures! I’m so excited to see where it goes. 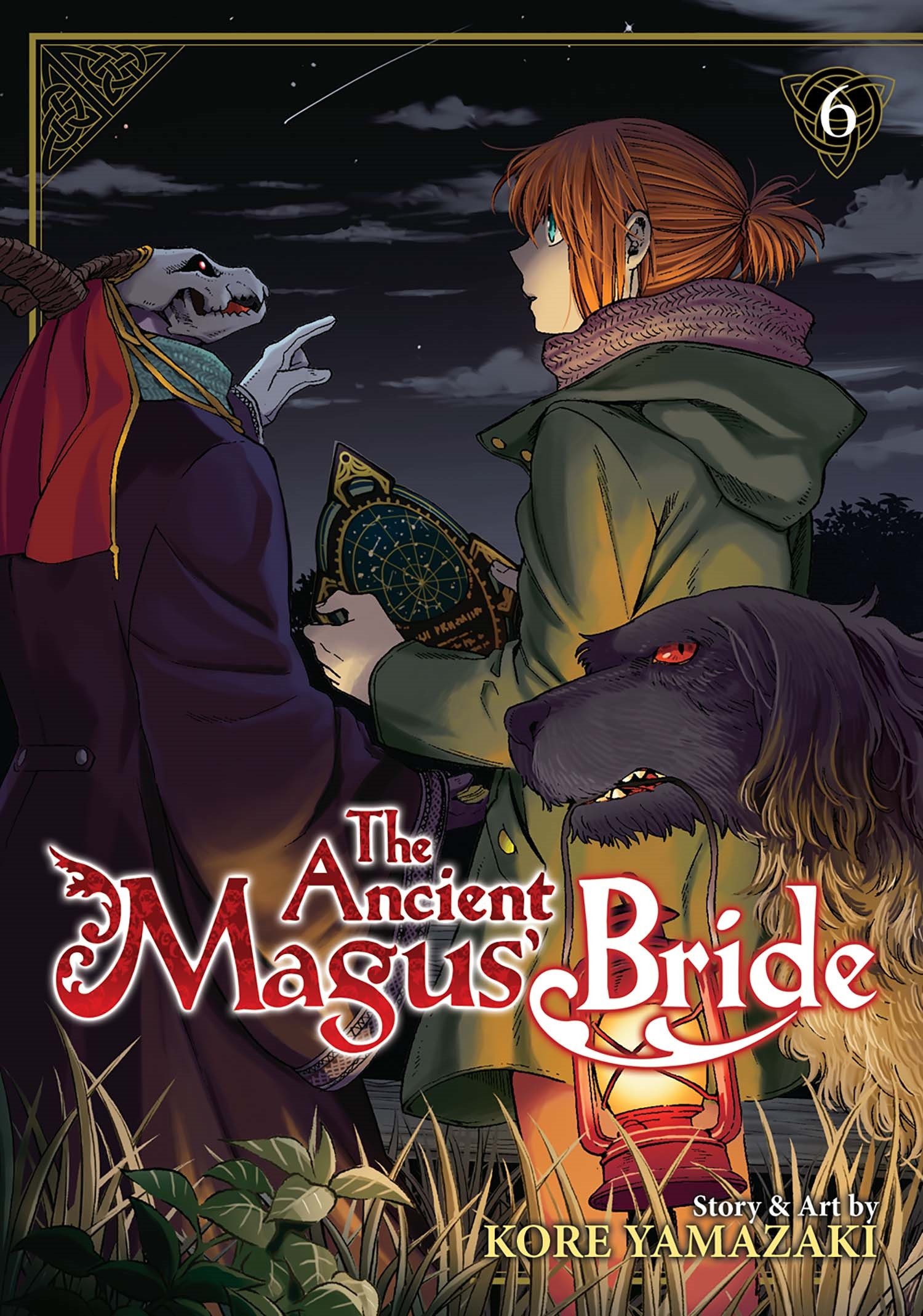 So I got into it on the recommendation of a writer I really respect, and I do not have enough good things to say about The Ancient Magus Bride. The premise sounds uncomfortable - a fifteen year old with the ability to see and attract all manner of magical life is sold into slavery, and then purchased by a skeleton monster magician who wants to make her his apprentice and bride, but the story is actually -at least what I’ve read- extremely well written and really touching. To paraphrase one of the tweets that made me consider picking it up to begin with - “I will stan for any piece of media in which an abuse victim is made to feel safe and repeatedly told things aren’t her fault” which is a pretty apt description of TAMB, the central character arc is mostly about Chise healing and recovering from the events that have shaped her life, wrapped in an interesting fantasy setting and a plot that sometimes gets dark, but never stops being heartwarming.

The author, Kore Yamazaki, has also done two interviews that I’ve seen about it if you’re interested, although neither in English you’ll have to run 'em through whatever translating site you prefer; 1, 2

You can get the volumes off of most bookstores presumedly, although I don’t really read much manga generally so I’ve been getting Magus Bride from Bookdepository myself. Also if you do plan to read 'em

probably goes without saying since the protag is an abuse victim but there’s themes of abuse, depression and some amount of on-screen violence although it’s never particuarly gory as far as I can remember 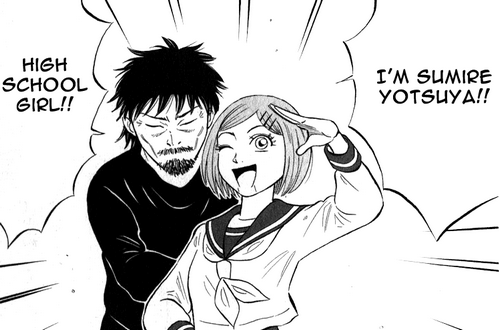 In typical Slice-of-life fashion Sumire helps a lot of people solve their daily problems, even though for some reason a lot of people don’t initially like her. I can only wonder why.

(But actually for a story about a puppet-high school girl it’s very heartfelt and genuine).

Oh man, I totally forgot Sumire 16 Sai existed. Must have been years since I last read it. 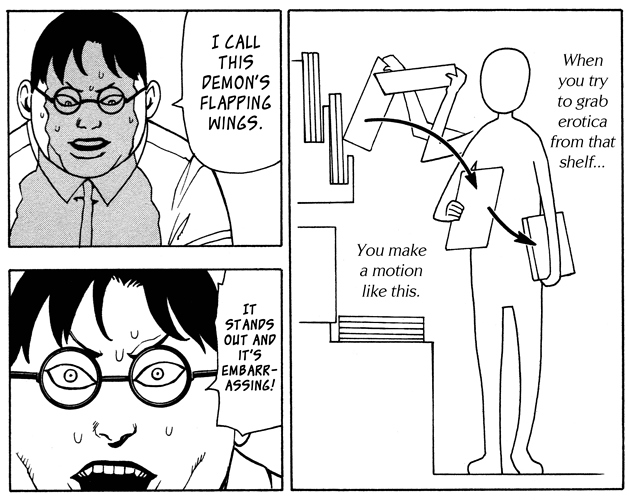 A rather funny series of disconnected shorts which all tie together. Does get a bit dark and 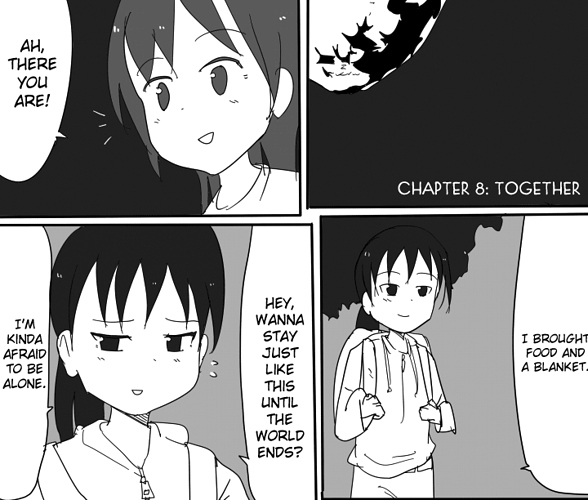 Justlikethis2.jpg720×612 168 KB
A short comic about two girls getting to know each other in the lead-up to an asteroid destroying the earth.

for suicidal ideation and self-harm. 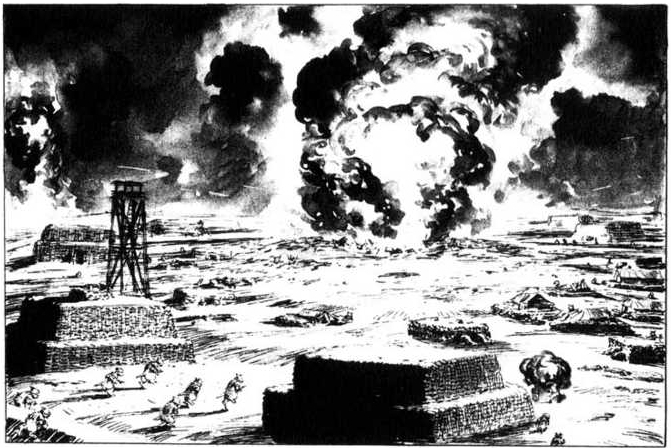 An older manga about Vietnam, featuring various animals in the roles of the different races/factions of the war. Despite the premise, it’s actually a really good and well-researched look into the war from a soldier’s perspective. Suppose it goes without saying but

for violence and racial slurs.

My Lesbian Experience with Loneliness: 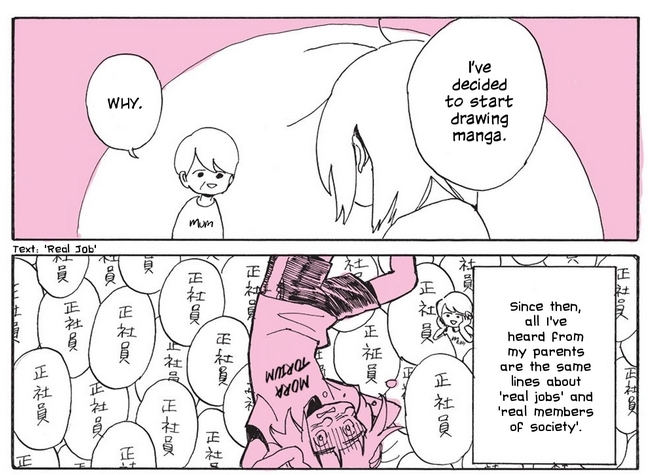 A really good autobiographical manga about a woman struggling with mental illness, confusion about her sexuality, an inability to maintain and hold down a job, and pressure from her parents to do something with her life. Currently being localized by Seven Seas, it’ll be released in English on in June.

Getenrou is great, and I’d honestly recommend all of Ishiguro Masakazu’s other works, as well. I’m especially fond of Soremachi and his one-shot, Karakuri.

But yeah, I thought I’d make a few yuri recommendations of my own:

Omoi no Kakera/Fragments of Love (by Takemiya Jin):

A lesbian drama series following a protagonist whose experiences have made her uninterested in love. Notable for having characters with explicit LGBT identities who actually talk about what it’s like with each-other.

for rape in the side-story.

Watashi no Sekai o Kousei Suru Chiri no You na Nanika/These Feelings We All Must Endure (by Amano Shuninta):

awnil.png548×768 334 KB
A much darker adult lesbian drama following a group of seven women and their intertwining, sometimes harmful relationships between each-other. Has the only asexual lesbian character I’ve ever seen in a work of fiction.

for abuse and eating disorders. Also 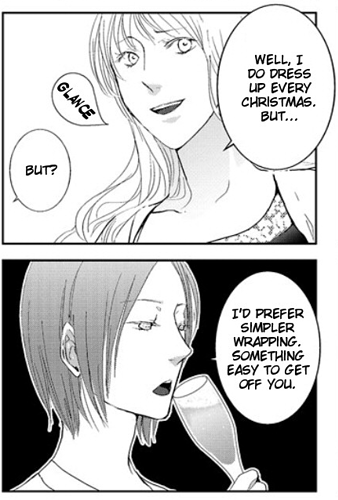 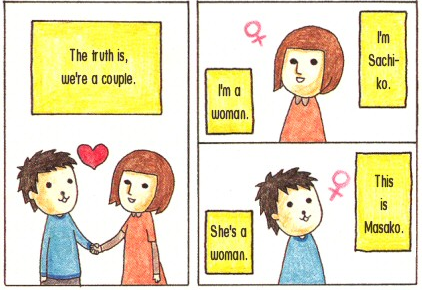 An autobiographical comedy series about lesbian life in Japan. It goes into a lot of details about LGBT culture in Japan that don’t really come up in yuri series, so it’s a pretty fascinating read.

Speaking of autobiographical LGBT manga, something I forgot to include in my last post is Hanayome wa Motodanshi/The Bride is a Guy. It’s a really adorable autobiographical series about a transgender woman’s experiences transitioning, and the support she receives from her boyfriend/husband. 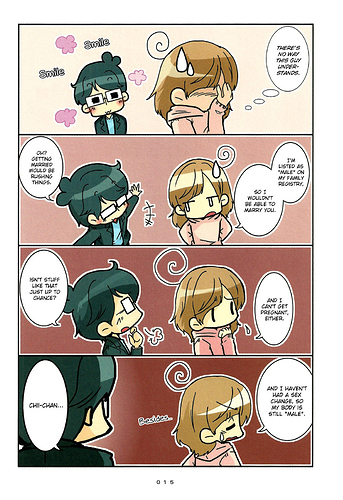 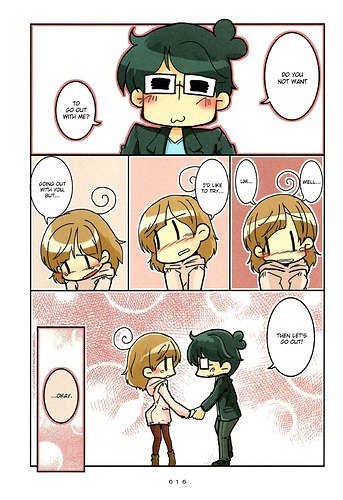 Acts as a pretty good “transgender 101” for people unfamiliar with the specifics of being trans, and also addresses some issues relevant to trans people (such as why gay marriage actually is sorta important to trans people). 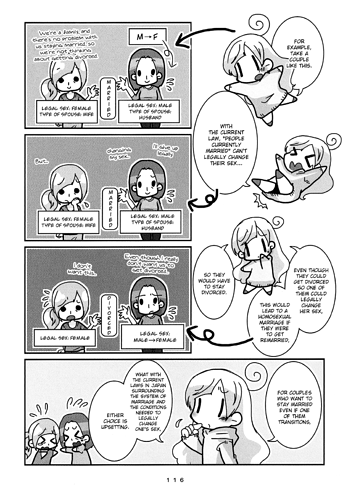