The Dub Defender Has Logged On - Let's Play Yakuza 1 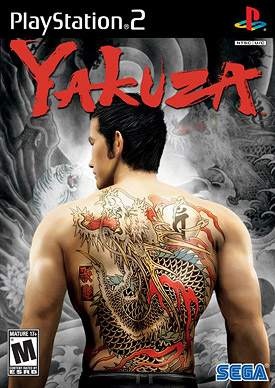 The meta-narrative of the Yakuza series is well-known by now: a great game franchise that was well-beloved in its native Japan, but was never able to break into the West despite repeated attempts by Sega. Then, after years of cutting budgets for localizations and protests from western Yakuza fan(s?), they put in significantly more time and money to localize Yakuza 0. It became a smash hit, and it’s now easier than ever to get Yakuza games in the U.S. It’s been a couple of years since Yakuza 0, Yakuza 6 had a contentious plot (no spoilers), and Yakuza 7 is a JRPG instead of a Brawler. The Yakuza Backlash is coming, and before it gets here, I wanted to examine the humble beginnings of a really solid franchise.

One of the oft-repeated reasons for Yakuza’s poor reception was the iffy dub of the first game. The dub is so bad, allegedly, that it is the sole reason that none of the other games in the series are dubbed. There isn’t really any evidence for that; all official statements point to cost and cost alone being the deciding factor for axing dubs, and early promotional materials for Yakuza 3 promised English voice acting. The two spinoff games, Fist of the North Star: Lost Paradise and Judgement, were considerably smaller, and therefore cheaper to dub, than the average Yakuza title and did receive dubs. I think the voice work in this game is fine. The direction is rough, but every actor is at least trying to put in a good performance, so it doesn’t bother me too much. But it is just goofy enough to easily make fun of, so get ready to point and laugh!

Joining me for this is my supercool girlfriend, @Fefnir. I will be completing every substory and trying to get every coin locker, but my main intent is to show off this game’s localization and, hopefully, prove that it’s not as bad as its reputation suggests.

I put verbal warnings for specific issues in specific episodes, but this whole game is filled with excessive violence. The HEAT system encourages some brutal stuff, so be aware of that.

Our story begins with a by-the-numbers debt collection and an introduction to the one dub performance that everyone agrees was actually pretty good.

The name of Shinji Tanaka’s VA, who I completely blanked on in the episode, is Daniel Capallero.

This time, the actual plot can get started! We meet the last couple of players in the Dojima Family and learn exactly what was going on in the opening cutscene.

EDIT: I put a Content Warning in the episode itself, but you know what? I should probably put one in the post as well. This episode contains discussion, but no depiction, of attempted sexual assualt. Timestamps are at 5:49 and 9:43.

This time, Kiryu is let out of prison. Kazama wants to meet with him, but at a location that Kiryu has never heard of. Time to go find it!

Content warning time again: There is an ableist slur, specifically the R slur, at 3:48.

This time, Kiryu manages to find Stardust, but he has a little trouble getting in. Kiryu also runs into another person he knew ten years ago.

This time, Kiryu needs to infiltrate a funeral so he can meet with Kazama/Fuma. I’m sure this will go well and will not be annoying at all.

This time, Kiryu needs to fight his way out of a funeral! This is the part of the game where everything clicked for me!

BTW, I accidentally clipped my mic towards the end of this episode. What I was trying to say was that Shimano’s boss fight is considerably less fun in Kiwami because he (1) fights like Mr. Shakedown, (2) has way too much health, and (3) regenerates health unless you bought the Rush Kiwami heat action.

This time, Kiryu meets up with an old enemy and an old friend. This is the last video before things open up, so I hope you weren’t expecting a quickly paced plot!

hopping on this before its too late https://t.co/0iigEJ2qzb 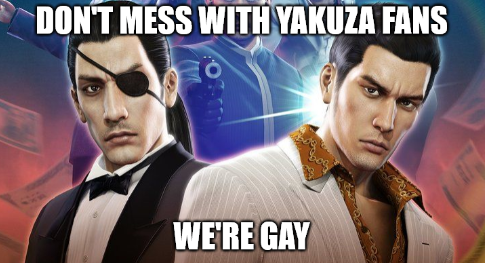 It’s time for S I D E Q U E S T S. Chapter four unlocks a massive amount of side content, so we’re going to be here for a while. \

We don’t need subs this game is dubbed.

We finally finish the Chapter 4 substories!

Today’s video contains a transphobic comment. Kiryu refers to a man dressed as a woman as “it.” It super fucking sucks and it’s at 29:50 if you want to avoid it.

Now it’s time to progress the story! I’m sure there were no consequences for taking so long!

Bit of a short update this time, but we do get to hear one of the more infamous lines from the dub!

It’s more substories. Look, it’s a Yakuza game, there’s going to be a lot of sidequests!

This time, Kiryu has to fight his way through a tournament arc. Also, Majima shows up!

Only an Uncut Commentary version? That must mean it’s time for more substories. Come see Kiryu stumble across a hit attempt!

This is vaguely ominous. Fingers crossed Kiryu’s just here to solve my side story and not take my crime organization down bit by bit.

It’s time for the hostess sidequests! This one if fairly long, but I didn’t want to spend more than one video on it.

Now we can progress the story again. Today, Kiryu has to help two dads! Neither of them are really good dads, but one is definitely worse than the other!