Let me tell you, vampires that don’t respect your time are the worst.

The year is 1094: The most well known warriors of the land are Leon Belmont, thought to be the strongest man alive, and Mathias Cronqvist, a genius strategist. Years ago, Mathias lost his wife while he was out campaigning, and he’s been bedridden ever since. Leon continued on his own, until one day Mathias gave him grave news: Leon’s fiancé had been kidnapped by a vampire. Leon rushes to the Forest of Eternal Night to save her, with little regard as to the dangers he is about to face.

Lament of Innocence is the first of two Castlevania PS2 games, and the first game in the series chronologically. This game is mainly a brawler, though it does have some very light Metroidvania elements, (and I really do mean light.) And as far as brawlers go, it’s fairly simple; you’ve got as whip. You’ll get more whips later. It’s whips all around, basically. Still though, combat can be fun, considering the variety of enemies and Leon’s ability to dodge-flip just about anything.

Heck yes~ Love this game so much.

I never played the castlevania games so im excited to see how this plays out. quickly bookmarks

Honestly feel because of how bad the N64 Castlevanias were received this one wasn’t received too well either, but it’s really good! Though I’m biased.

I was going to say something about how it might have been compared to other hack and slashes at the time, but I checked and this game came out around the same time as Devil May Cry 2, so actually I’d say it was actually pretty solid.

That’s fair I guess? But it’s not really like those types. I don’t think GoW was out at the time, but a character action game like DMC is completely different. @_@ Like Lords of Shadow I can get it since it was designed that way.

Ah, cool.
Well, my morning’s gonna be fun. I’ll have this fixed as soon as possible. Until then, ugh.
Edit: Problem solved, I moved to a better image host.

I was not prepared for your sas towards the story for this game. I was sitting here shitting myself over it and then you pipe in as I point something out to my husband. I also did not hear Conquist…I heard Confist so this is going well. Also I’m glad Mathias knows everything even though he has been bedridden for a year. Mathias for the win. Also glad to know Leon is Link and we have an old man companion to give us all the magical weapons we need to survive. 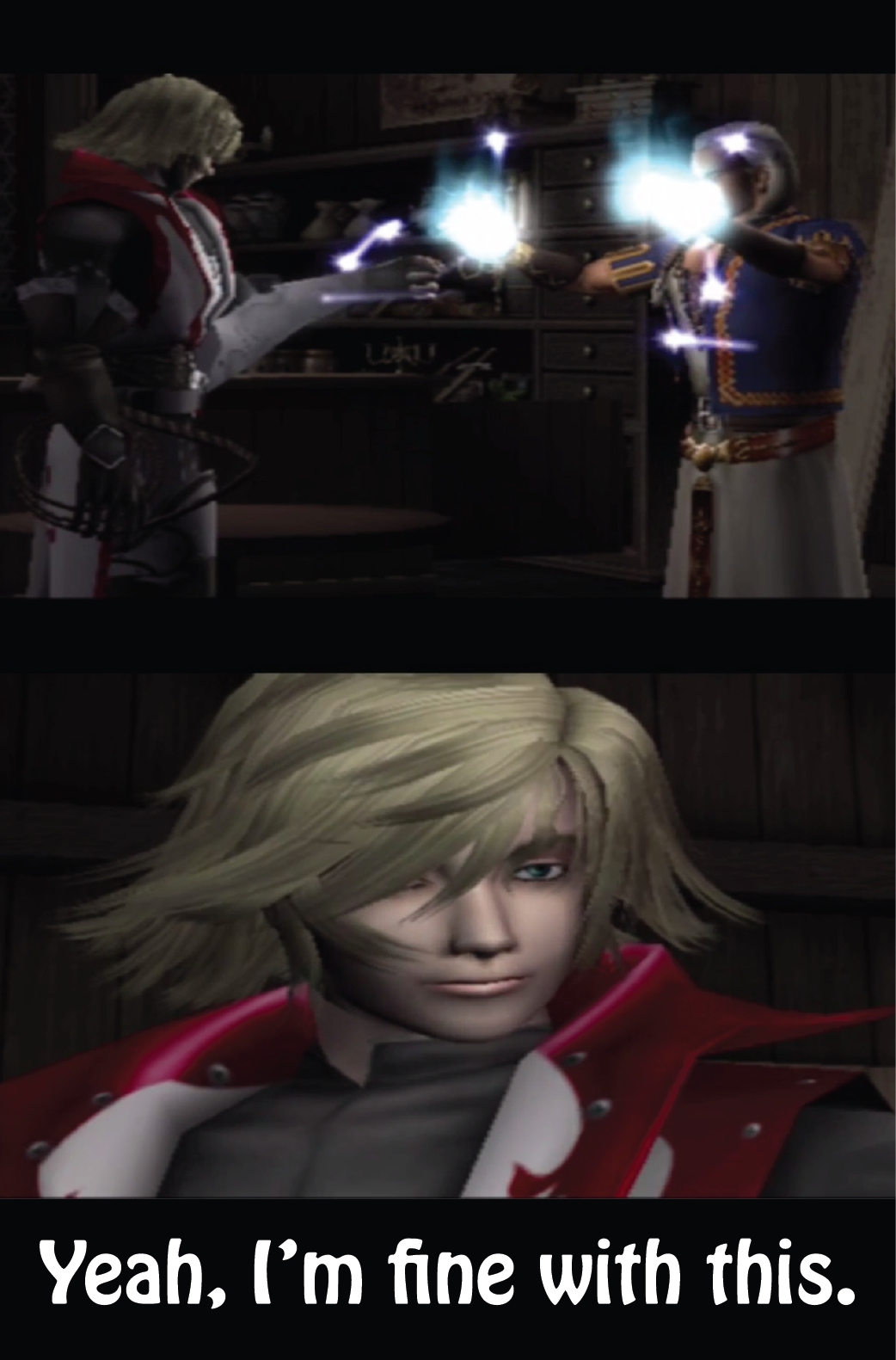 Not going to lie, I’m jealous of how well you’ve captured this. You capturing it on a PS2?

Update time! After a brief look into the castle’s basement, we enter the House of Sacred Remains, (which I can’t stop referring to as the “House of Sacred Remnants.”) As the intended first area, it’s fairly standard in terms of design and enemy encounters. Still though, there’s a lot of money to be made whip-grappling hither and thither.

Leon continues on through the… admittedly less trap-filled basement. Still though, there are plenty of very large, angry monsters lurking about the area, as well as the most difficult trial thus far: a puzzle of basic memory. If you can even call it a puzzle, anyway.

I feel like Leon picking up the bloody cape was more of him finding a cape and being like “Bloody f-ing cape! I was hoping for a sword.” and then reluctantly throwing it on.

Leon’s reactions and actions in this game are not at all what my reactions would be.

I started to check this out. Weirdly, YouTube recommends me parts five through eight, but claims that part 4 doesn’t exist. Did I just catch it at an odd upload moment?

Nope. This is actually a redo of the LP I started a while ago, but never finished because my computer died. I started over because the original quality was garbage, and in this run I covered what was two videos of progress in only one video.

Leon Belmont faces his toughest challenge yet, as he must defeat the Parasite Worm. Or rather, the room the Parsite Worm is in. PW kinda just… does his own thing.

Oh whoops, we left Leon seething about vampires in a save room for months on end. I guess we better get back to him, huh? Today, Leon Belmont returns to the old grind in the Anti-Soul Mysteries Lab, the third most over-complicated name for an alchemy lab they could have possibly come up with.