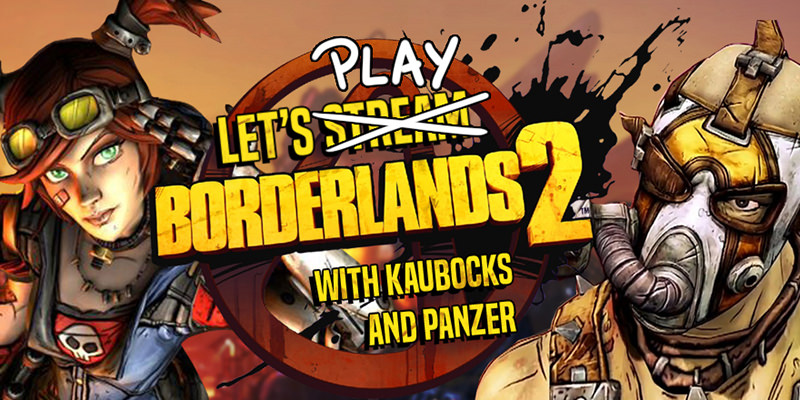 Borderlands 2! You all know it. It’s sold millions of copies! But in case you don’t know it, I can give you a very quick rundown.

Borderlands 2 is a first person shooter set on the shithole planet Pandora overrun by psychos, mad robots, and wildlife that all want to kill you. There’s some kind of story going on where the CEO of an evil corporation is trying to awaken a mystical beast to destroy the planet but that’s not really that important. Here’s what is important:

Seriously there was a period of about two solid years where we repeatedly played through the Borderlands games. We love them, and we’ve wanted to LP them for a while, but every time we tried it just never felt right. For us the comfort in Borderlands was just a way for us to shoot the shit while we shoot the shit. So we figured the best way to retain this casual approach would be to stream it!

For the past several weeks Panzer and I have been streaming Borderlands 2 on my Twitch channel. If you care to catch us live, we usually play on Sundays at 3PM PST. If you can’t be around for them or the streaming thing just isn’t your scene, then this thread is for you! Please enjoy this easily paused and rewound format to watch at your own pace. If you wish to experience our Twitch chat along with the video, simply enable Closed Captions on the video! If you don’t care for chat, don’t sweat-- just leave that sucker off! Panzer and I do our best to explicitly mention if we’re speaking to or answering questions from chat so you shouldn’t find us saying random things out of context.

Due to the casual stream format, videos will typically be around 25-45 minutes long. Currently going for two uploads a week but may bump up to three if we start rocketing ahead of our backlog. Also, fair warning to the Borderlands purists out there… we cheat our asses off. Where’s the fun in the game if we aren’t getting sick guns all the time? General commentary/video/audio quality might be a little all over the place as we go on due to me not editing this by hand, but the moment we actually start to care about that stuff is when we lose track of why we like to play Borderlands in the first place. Our playthrough is going to be chill as fuck, yo.

We don’t have a game spoiler policy, but all we ask is if you’ve seen our streams to not explicitly tell people what we do in future videos! 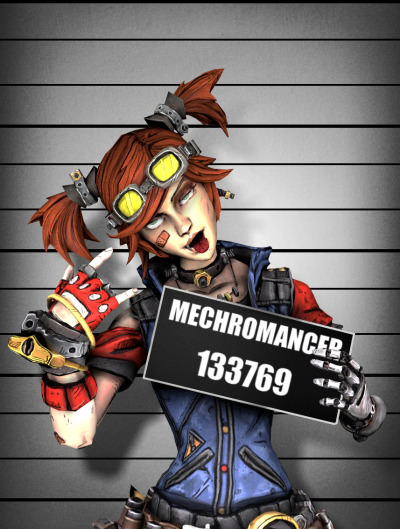 Panzer will be playing as Gaige; the first DLC character released for the game. Gaige’s action skill is to summon a useful robot friend who punches things. Aside from that she has a special ability where the more bullets she shoots without manually reloading the more powerful she gets. The downside to this is she becomes more and more inaccurate as this goes on. Typically if you hear us talking about “stacks”, this is what we’re referring to.

If you want to learn more about Gaige’s skill trees, you can find it here. Panzer primarily focuses on the right tree with a little bit of the left. 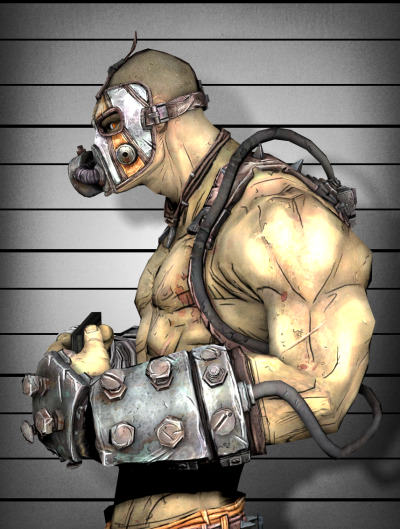 I will be playing as Krieg; the second and last DLC character released for the game. Krieg’s action skill is to become enraged, increasing his movement speed and melee damage by ridiculous amounts. Aside from that he also has an ability where he becomes the only character in the game who opens himself up to friendly fire damage which is incredible synergy with the girl who literally can’t aim and I definitely won’t get fed up about this down the road.

If you want to learn more about Krieg’s skill trees, you can find it here. I primarily focus on the middle tree but will likely bounce around.

This is going to be a gub LP.

Aah Borderlands. I have a distinct memory about you. Mostly in playing Borderlands 2 entirely solo because I had no friends at the time who were interested (and I wanted to hear the dialogue and no one is capable of just waiting to hear it with me). Mechromancer is good shit for that, and I learned something really fun at the end of the game.

The game continues to run during the credits. Due to some of the skills you can get for the Mechromancer, I made like three levels just watching the credits. Any game that delivers an experience like that is at least worth looking at, even if the humour is…often hit or miss.

Also yeah upping the drop rate is Good and Correct. Game’s boring as shit when you don’t get good weapons and it really speaks to how actually terrible the game can be when it just doesn’t give you anything fun to do. Thank god for robot friend.

I sorta recently started borderlands 2 and I thiiiiink I picked Gaige? I kinda dropped off immediately though, probably due to my lack of cheating.

In my LP headcanon, this is what Vincent’s and Leo’s kids grew up to be after the events of the A Way Out LP.

Ahh Borderlands. Probably the best thing Gearbox has ever created…

I kinda dropped off immediately though, probably due to my lack of cheating.

Borderlands 2 is a well made game that absolutely does not break if you look at it funny.

I’m gonna just willing shove my head into the guillotine here and ask why everyone hates Claptrap. I agree with our benevolent angel AI friend, he’s a funny little robot. I’ll admit I have no idea what he does in the pre-sequel, and you mention his ability is rude, but he’s just a nice little idiot robot friend.

I think the reason why there’s no reaction from the Boom brothers is because they only have armour health? What a weird oversight.

The subtle highlight of this episode was Deathtrap just kinda not caring about Kaubock’s pause menu and hanging out on the front layer of everything. Also MY copy of Flynt’s stupid gun was actually pretty good.

For me its just that he’s excessively annoying.

I feel like in the first game he was a mildly annoying inconvenience that you had to deal with right at the beginning (and in one DLC) and then largely got to ignore, but in the second game, they made him a “character”. Unfortunately, his personality isn’t exactly charming, particularly after you’ve listened to him ramble about being programmed to sound happy for the upteenth time you replay the game.
I couldn’t get more than an hour or two into the pre-sequel, and I had no interest in playing Claptrap, so that’s about the extent of my knowledge, there.

Not for nothing but if your problem with a character is “I’ve played the game so many times it’s starting to grate on me” that feels like a two way street here.

I just don’t get all the hate is all. Regardless, I definitely get what you mean, it just feels like the amount of hate I see for the guy is way over what I’d expect?

A fair and valid point. I’m mostly offering suggestions as to why the hate, though I could have phrased that better.

I don’t really hate Claptrap, and in the first game I would even say I liked him. Where the issue comes in-at least for me-is that I can easily move through the first set of missions in BL1 without feeling any real drag, but the first batch of missions in BL2 feels like it takes quite a bit longer to get through, and Claptrap is, perhaps unfairly, associated with that.

he’s a garbage can that can yell at me, and i already have enough of that with kaubocks

We blew past level 7; that means CheatEngine is finally kicking in for realsies! Hope you guys like lots of eridium and hanging out in Sanctuary.