Deep in the bowels of the Black Mesa Research Facility, a decommissioned missile base, a top-secret project is underway.

You are Gordon Freeman, a research associate in the Anomalous Materials Laboratory. You have limited security clearance. Each morning you ride the train to work from the employee dorms, put on your environmental protection suit, and run tests on whatever odd objects have been delivered from some other nameless part of the Black Mesa compound.

One morning you are sent alone into the Test Chamber to analyze a strange crystalline specimen. A routine analysis, they tell you. Until something goes wrong, and you’re staring into an alien world.

Is it sabotage? An accident? Or is it something you did? All you hear is screaming; all you see is space-time shattering. The next thing you know, the entire Black Mesa Facility is a nightmare zone, with sirens wailing and scientists fleeing in terror from the things their co-workers have become. Hordes of creatures are pouring through rifts in the local fabric of reality. Monsters are everywhere. Madness rules.

You head for the surface, but the usual routes are impassable. You must enlist the help of traumatised scientists and trigger-happy security guards to get through high-security zones, sneaking and fighting your way through ruined missile silos and Cold War cafeterias, through dark air ducts and subterranean railways.

What’s more, the inhuman monsters aren’t your only enemies. The government has sent in a ruthless and efficient clean-up crew, and their orders seem to be that when it comes to Black Mesa, nothing gets out alive… and especially not you.

In 1996, two Microsoft millionaires started their own games company. For their first project, they decided to develop a sci-fi first-person shooter. They met with id Software and licensed their Quake engine. They recruited amateurs who had made impressive Quake maps and mods, as well as one or two professionals who had worked on the PlayStation version of Doom.

No-one expected ‘Valve Software’ to amount to much. What could a couple of guys used to developing computer operating systems know about making games? But they managed to find a publisher, Sierra, who were best known for adventure games and simulations.

Valve took the basic plot of Doom - an experiment causes monsters to materialise out of thin air - but rather than just using the story as an excuse for shooting things, they created a believable world, with a story and setting that players could immerse themselves in. They took inspiration from Stephen King’s The Mist, episodes of The Outer Limits, and the conspiracies of The X-Files. Levels resembled real-world laboratories and offices, rather than shooting arenas. Valve populated the world with characters that had groundbreaking skeletal animations, and performed complex scripted sequences. Despite the emphasis on storytelling, Valve committed to keeping the game entirely in a first-person perspective, with no cinematics or third-person cutscenes, to avoid breaking immersion.

On the 19th of November 1998, Valve released Half-Life, to unprecedented critical acclaim, and over 50 Game of the Year awards from publications worldwide. This led to Half-Life becoming the first game to be re-released in a special ‘Game of the Year Edition’, an updated version that came with additional multiplayer content, including Team Fortress Classic, a remake of a popular Quake mod.

Half-Life also came with map-making and modding tools, which led to Half-Life dominating the PC gaming scene, as buying Half-Life also gave access to hundreds of fan-made adventures and multiplayer mods. Some amateur projects became so popular that they were published as retail games, such as Counter-Strike and Day of Defeat. Half-Life also had two official expansion packs, developed by Gearbox Software, Opposing Force and Blue Shift. Gearbox also developed an excellent PlayStation 2 port of Half-Life that included a 2-player co-op experience called Decay.

For years to come, PC Gamer would call Half-Life ‘The Best PC Game Ever’ and ‘Best Game of All Time’, and PC Zone would call it ‘Game of the Millennium’. Nothing came close to taking Half-Life’s throne… until the 16th of November 2004, when Valve released Half-Life 2. The sequel lived up to its predecessor’s reputation, and it received 39 Game of the Year awards, and in 2012 Half-Life 2 won ‘Game of the Decade’ at the Spike Video Game Awards, eight years after its release.

Like Half-Life before it, Half-Life 2 spawned hundreds of fan-made mods, both singleplayer and multiplayer. This includes Black Mesa, a modern re-imagining of Half-Life built in Half-Life 2’s Source engine.

A continuation - either in the form of Episode Three, or a full-fledged Half-Life 3 - was promised, but since then a decade has passed by with no news. Valve might have lost interest in Half-Life, but the games are still beloved by many. The 19th of November 2018 marks Half-Life’s 20th anniversary, so let’s go back and play through one of the most significant games franchises of all time.

When I was a young teenager, Half-Life was the game that got me into PC gaming. I played hundreds of Half-Life mods, both singleplayer and multiplayer, as well as doing a little modding of my own. I also created my own website, The Lambda Project, which included an imaginary history of the Black Mesa facility, and a complete timeline of the Black Mesa disaster, integrating all the events of the expansion packs. Despite just being guesswork and fanfiction, much of what I wrote was taken as gospel by other fans, who ended up reproducing my content on Wikipedia and other sites. I was active on several forums, where some members of the Half-Life community nicknamed me “The Half-Life Story Guru”.

I eventually became a Staff Writer for Planet Half-Life, the biggest Half-Life community site, where I wrote mod reviews and other articles. I came up with the idea for a ‘Planet Half-Life Encyclopedia’ - an ‘in-universe’ guide to every character, creature, location and weapon. This developed into the ‘Planet Half-Life Wiki’, which anyone could edit. While that old PHL Wiki is now defunct, many of the entries I wrote have been reproduced on the modern Half-Life Wiki, once again copy-pasted by naive fans who took my own theories to be official Half-Life canon.

Ever since I started doing Let’s Plays back in 2012, I’ve been planning on doing a giant Let’s Play of the entire Half-Life franchse. Now that Half-Life’s 20th anniversary is here, it seems as good a time as any.

We’ll be covering the main games, the official expansions, and a number of notable mods.

I’m playing the original retail versions of Half-Life and its expansions, to present the original Half-Life experience. Over the years, Half-Life had many patches to fix/improve things in multiplayer, but which inadvertently broke cool features in singleplayer. Also, old versions of Half-Life supported EAX audio for echo/reverb sound effects, something that’s no longer supported on the Steam version. (While EAX supposedly doesn’t work on modern versions of Windows, I’ve been able to get it working using a tool called Creative Alchemy.)

The one downside is that old versions of Half-Life don’t support widescreen resolutions. But playing in good old 1024x768 resolution helps give that authentic 1998 experience anyway! I’m upscaling the footage to higher resolutions, to take advantage of take advantage of YouTube’s higher bitrates for Ultra Definition videos.

The early Half-Life games don’t have subtitles, so I am adding my own subtitles for all dialogue. 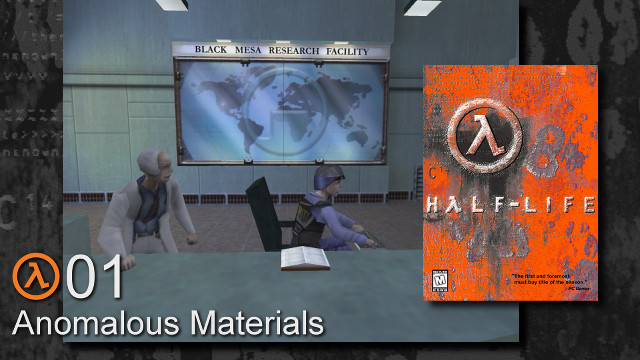 Standard insertion for a non-standard specimen.

The production values on this are great! Love the cutaways to NPC introductions, and comparisons to other versions.

Half-Life holds a special place in my heart because my first ever Steam purchase was a physical copy of the Half Life Anthology I found at Big Lots. Since that CD key was the first thing I redeemed on Steam I still keep it laying around just in case I ever get locked out of my account and need to prove my ownership of it.

I’m terrible at the game though, not sure why…I’m decent at shooters, but Half-Life just eats my lunch for some reason. 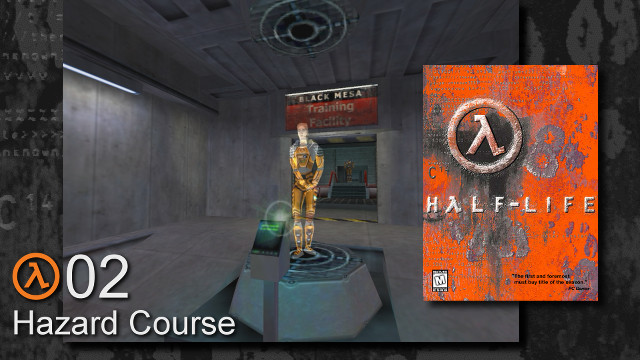 Gordon has a flashback to his H.E.V. suit training, at Black Mesa’s absurdly dangerous training facility.