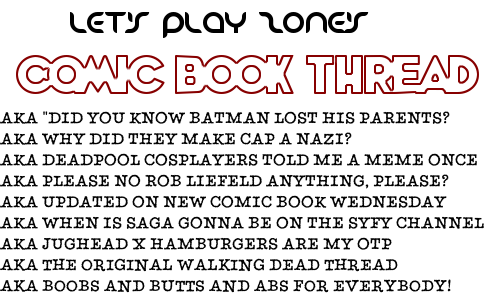 Comic Books or to some people “Graphic Novels”, the illustrations, the stories, the worlds. An amazing journey from Asgard to Dimension Z. Rather it’s your favorite superheroes from the big names like Marvel and DC, to the rise of independents in Dark Horse and Boom Studios, have a fun time inside this Comic Book thread!

Talk about what you’ve been reading, but remember to keep spoilers filtered and be able to help newcomers find the good comic books, I would even allow TV/Movie discussion if you want to discuss things like Flash, Arrow, Daredevil or Guardians of the Galaxy.

And don’t forget to support our internet darlings over at the Webcomics thread!

Most ex-Yugoslavian kids of the 80s and 90s grew up on Bonelli comics, which are Italian pulp comic books that frequently are heavily inspired by existing movies and concepts. Some of the most famous ones were Zagor (aka the Spirit of the Hatchet), Martin Mystère (paranormal investigator) and Dylan Dog (investigator of nightmares with Groucho Marx as his sidekick). The latter two were brought over to the West as a failed Totally Spies styled cartoon and a failed live action movie.

The Marvel and DC comics mostly got marketed through cartoons and toys, but people read them much more nowadays.

I bought Werewolf by Night Essentials and the first Judge Dredd Complete Case Files last month in an attempt to get into both, since I am generally a fan of oldschool over-the-top pulp comics.

I just came here to say that Warren Ellis’ (

) Transmetropolitan is fantastic and you should read it. Not sure if a trigger warning is entirely required on this one, but it is violent and deals with pretty dark themes, so it probably makes sense to put one.

For a taste of what Warren Ellis’ writing is like, take a look at his completed webcomic (

) Freak Angels. It deals with 12 english twentysomethings after a sort-of apokalypse. Kind of difficult to describe it without spoiling anything, so just take a look for yourself.

So I only recently started getting into comics (thanks, Image Comics humble book bundle) but my absolute faves right now are Rat Queens, Plutona, and Snotgirl (which is co-written by the same guy who did Scott Pilgrim).

for Rat Queens on drugs and slurs. Can’t think of ones for the others off the top of my head.

I have a lot of catching up to do in some other comics but I’m very interested in seeing what happens in Nailbiter. The comic name has a great double meaning too. EXTREMELY

for violence on that one. Lots of graphic death and gore.

I’m not really sure where to go from there - I’ve never really gotten into comics till now because I assumed they were all superhero stuff which isn’t interesting to me (or is too difficult to get current with). Right now my goals are to get current on the ones I liked in that comic bundle and get recommendations from there!

My people!
I’ve been reading forever and I think my pull list is pretty deep these days. Hawkeye, Occupy Avengers, The Unbeatable Squirrel Girl are my Marvel pulls, Batgirl/Nighting/Batgirl & the BOP/Young Animal are my DC gets, and I buy WicDiv/Saga/Sex Crimz/Snotgirl/The Fix from Image. These doesn’t include the occasional trade/humble bundle or Treat Yo Self purchase.

(Also I do the whole cosplay thing, because I am an shameless nerd).

I would just like to take a moment to plug my current obsession: East of West. It’s like a post apocalyptic sci-fi western with great art and storyline!

for violence and some of the themes.

Oh also I just finished Southern Bastards volume 1 and that’s a damn good comic. Violent and full of horrible rednecks, but really good. Especially if you’re from the south and hate the south too.

Martin Mystery was rad,shame it never really caught on over in the U.S.

I just found out Hulu is making a Runaways series and I don’t know how I feel about it.

I’m currently reading most of the output from DC after Rebirth along with the Flintstones and Snagglepuss when that comes out.

EDIT : I’ve also been watching all of the Arrowverse shows, Gotham, and the Netflix Marvel shows These dumb lines are the reason I love pulpy comics.

I’ve passed by this thread a hundred times and read it as “the cook book thread” each time until right now. So if I had to suggest a cook book, I guess it would be The Silver Spoon?

Joking aside, I have been out of comic books for a while but have been slowly dipping myself back in in recent years. I’ve spent a few years obsessively trying to collect every issue of Batwoman, which I completed just in time for the new run of Batwoman. I really care about Batwoman and it’s the most trash nerd thing about me.

I also used to read a lot of the early 2000s Teen Titans comics, but my greatest affection might lie for Spider-Girl and Araña, both which lived before their time

So tomorrow is New Comics Wednesday in the States. What are y’all picking up?

Me:
All-Star Batman
Batgirl and The Birds Of Prey
JLA Rebirth
Motor Crush
The Wicked and the Divine

I’ll be getting The Flash, JLA Rebirth, Red Hood and the Outlaws, New Super-Man, and Deadman: Dark Mansion of Forbidden Love.

Does anyone have any Marvel recommendations? Or any from any of the other publishers?

In general, or something that drops this week specifically? Because my new go to rec is the current Hawkeye books: Occupy Avengers has a dumb title, but is a ton of fun and smart, and Kate Bishop Hawkeye is the closest thing we’ve gotten to a true follow up to the Fraction/Aja run.

In general. I’ll have to check out that Hawkeye run. I really like archery and archers so it should be for me if it has even a little of that in it.