But the real villain is incompetent authority. 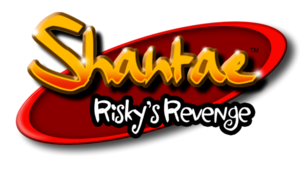 With Risky’s plot to rule the land with the power of a steam engine put to rest, Sequin Land has enjoyed at least some peace from the pirate menace. But Risky’s bounced back from her first defeat, and is now gunning for Shantae, her half-genie rival. While her latest theft, an oil lamp, seems a little lackluster as far as pilfered treasures go, Shantae has been assured that the lamp is very dangerous and should not be trifled with. But Shatae wouldn’t be Scuttle Town’s guardian if she took a pirate attack lying down, would she?

… I’ve been informed that Shantae has been fired.

Welcome to Risky’s Revenge! The long-awaited sequel to the cult classic on the Gameboy Color is just about what you’d expect from a sequel. The gameplay doesn’t feel too different from the original, outside of a few touchups, and both the spritework and animation are still top notch. Really, it’s pretty easy to jump into this game and enjoy it if you’ve already played the first, (if you haven’t played it yourself, I happen to have LPed it a while back, and you can find that here.) As always, you can talk about the first game here if you’d like, but please don’t spoil anything that hasn’t come up in this game yet.

We begin the game with Shantae suddenly beset by monsters! Apparently this is a common thing nowadays. But at least a trip to Mimic’s expo should brighten her day up, provided no vengeful pirates come along and ruin it.

If Shantae wants to beat Risky to the Magic Seals, she needs to find someone who knows where they are in the first place. Thankfully, she has a… reliable? We’ll say reliable. A reliable friend in Rottytops who, if nothing else, usually has good intel. Her love of brains, however, might be a hindrance.

Shantae has reached the first Labyrinth, and wouldn’t you know it, the guardian of the first Magic Seal is right here at the entrance! Certainly this Squid Baron will be kind enough to let Shantae have the Magic Seal since she gave him something to eat, right?

Well, this video isn’t thirty seconds long, so I think the answer to that question is obvious.

Shantae’s got her hands on the first Magic Seal, and as it happens, someone just might know where the second is! We already know that the Ammo Baron has a seal, and today’s the day his name will come up in a conversation! The conversation in question, though, may involve the Mayor doing something stupid and impulsive. Wouldn’t be the first time he’s made decisions like that, though.

Well, it looks like we couldn’t avoid selling Scuttle Town. But, there’s good news: Ammo Baron doesn’t seem to care about personally guarding his magic seal! But we’ll still need to fight for it, because it’s the prize of the Battle Tower. No points for guessing what the focus of this dungeon is.

The Battle Tower is now behind her, but Shantae has yet to find a transformation for this particular Labyrinth. So, into the overworld we go to find a new ability. And maybe a lead to the next Labyrinth as well, we don’t know where we’re going yet.