Greed is Good, Except When a Weight Falls on You – Let’s Play Super Mario Land 3: Wario Land

Okay but seriously, what was up with Wario and hypnosis back in the day. Why did they sell this man by having him enthrall the viewer with his powers. What the heck, Nintendo. 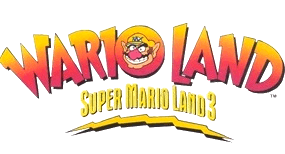 The Brown Sugar Pirates have stolen a giant, golden statue of Princess Peach! Captain Syrup, their leader, has locked it away in her fortress on Kitchen Island. Who could possibly retrieve such a valuable possession?

After losing Mario’s his castle that he stole borrowed, Wario sees the perfect opportunity to get a new, more permanent castle. By recovering the statue and selling it for ransom. You know, perfectly legitimate means of getting a house.

As the last game in the Mario Land series, and the first of the Wario Land series, this game plays like a further variation of Six Golden coins, but with the emphasis on coin collection that would be seen in later Wario Land titles. Wario, not yet nigh-invulnerable, has a number of abilities he gains through the various hats he can find. While most of them are similar to abilities Mario’s had, they’re all fairly distinct and they all have uses outside of “attacking enemies from afar” or “breaking the game via flight.”

… Okay that last one’s still there. But they’re all really neat power ups in theory, okay?

This isn’t technically a 100% run, but I will be getting all the treasures in the game. What that entails is, essentially, the only thing there really is to spoil in this game. So uh… don’t talk about that bridge until we cross it, I guess.

Wario arrives on the beach of Kitchen Island! There’s plenty of treasure to be had, and most of it isn’t even buried! A good start to the day for Wario, even if there are dozens of pirates trying to poke him with spears and the like.

Oh boy oh boy oh boy I’ve gone through this so many times and it’s been so long since I played it and I can see that the first image is from is after you do a certain thing and oh god I need to shut up before I blurt out everything.

One day Wario shall become immortal, untouchable by the hands of mortal beings in his pursuit of all the coins.

Okay but seriously, what was up with Wario and hypnosis back in the day. Why did they sell this man by having him enthrall the viewer with his powers. What the heck, Nintendo.

Nintendo had a lot of weird ads back in the day. Between this, the “This Game Stinks” campaign surrounding Earthbound, the Fire Emblem “poisoned the mutton” commercial, and others, I’m not sure what NoA’s marketing department was high on in the late '90s and early '00s.

90s advertising was strange in general, but man. At least in this case, NoA knew to sell Wario on being the bad guy character, so they were slightly more on the ball for him than, say Kirby.

On this episode, Wario climbs a mountain. Why is he climbing the mountain? Well I mean money, obviously. That’s why Wario does anything.

To case the mountain.
To loot that mountain.

I don’t think I’ve ever done that exit the intended way. Flying powers and gaining small amounts of height from flying into things and excuses to make crashing noises and all that jazz. Yes, I did find most things by complete accident - why do you ask?

so they were slightly more on the ball for him than, say Kirby.

Ah, the Jet Hat. My personal favorite of the power-ups as well. Air-dashing (multiple times in the same jump, even!) is really fun, although it can kinda break some of the platforming challenges in the game. I thought Wario jumps higher while using the Jet Hat as well?

Funny thing is, you don’t actually need to jump off the knives to get up to that secret exit, IIRC. I didn’t even know you could do that, honestly. The Jet Hat can air-dash more than once per jump, even after hitting a wall, and the rebound gives you some height. Wario can just repeatedly smash his face against that wall until he hits the top (pun intended).

Jet Wario does jump higher. I didn’t realize that ramming walls was such an effective strategy, though. Jet Wario’s got a lot of utilities.

Today, Wario descends into an iceberg, for no reason other than money. Thankfully, Wario’s wearing gloves. because the cold hard cash we’re dealing with today is literally cold, hard cash.

Getting shot by lightning and turning into a coin seems like Wario’s preferred way to go out, to be honest.

And just to be a little mean and add to the many siren calls of turning enemies into coins: Thwomp

Getting shot by lightning and turning into a coin seems like Wario’s preferred way to go out, to be honest.

And just to be a little mean and add to the many siren calls of turning enemies into coins: Thwomp

Turns slowly towards a non-existent camera I never knew about the Thwomps…
At the very least, there are very few opportunities to actually throw enemies into Thwomps, and I thiiiink we’ve passed most of them by this point? So it doesn’t bother me at all.

Course 17 isn’t even the worst one.

Wario’s back on track, both in the sense that we’re past the detour into the bonus world, and also that there’s a cart stage or two nestled into Stove Canyon. Also nestled in Stove Canyon: plenty of treasure dangling inches away from lava. Again we must be thankful for Wario’s begloved hands.

Excuse me, Wario will have you know that the best treasure is more treasure.

Wario has reached the Brown Sugar Pirates’ ship, semi-hidden near the cliffs of Kitchen Island. The captain’s out, which means any treasures on or near board are Wario’s for the taking. And I mean who’s going to stop him, the ducks? Pft, no. The ducks are nothing.