Suggested Topics to start you off:

To start things off, try voting for your favorite main game entry in the series (Just to see how this type of poll works)
(Edit: So this poll type doesn’t work the way I thought it would so I’m just going to close it down once we hit thirty votes and see what the final results are.)
Well went to 40 votes and according to everyone Final Fantasy 9.5 is the best Final Fantasy there is.

Well it seems that the number polls don’t work the way I thought they did. That’s good to know I guess.

I really, really hope they don’t screw up the FF7 remakes. I’m fine with it being multiple games, because trying to take the scale of something like FF7 and making it fit the standards and expectations of a current AAA game without cutting out tons of stuff would balloon its budget and production time like crazy. I’m just more worried that they’ll try to cram in stuff from the extended universe games into it, and I really don’t want to see anymore Gackt.

Part of 9 is winning, seems that second half is struggling.

The thing I am most worried about with the FF7 remake is bad voice acting. I keep thinking about HD Silent Hill and shuddering.

Well if we get to the Nibelheim flashback and Genesis swags in spouting his poetry I guess we’ll have our answer. I don’t know what to make of the episodic model yet since that’s been a hit or miss model so far.

I feel like the quality of voice acting we’ll get for the remakes will be the same quality we got for Advent Children, which wasn’t too hot.

You mean quiet mumbly and constantly drowned out by the soundtrack?

Actually it’s working as intended. 9.15 is the most perfect game, as we all know.

I haven’t picked up FF15 yet, but I am more of a fan of hack-and-slash Action RPG than turn-based. I would actually be one of the few people that liked Crisis Core for PSP. But I have only played 7, 8, and 10.

I am thinking about getting it though for PS4, because of my twitter timeline filled with people having an amazing time with “the bros in the car fighting monsters”.

I will say 15 is the first game in the series I’ve been interested in since 12 and the first one I’ve been enjoying since 10 so hey at least Square can still make good games. They just have to spend 10 years on them, first.

I havrn’t finished 15 yet, but I’m having fun driving around with these bishi boys. But it doesnt feel as good as 9

Honestly XV is my favorite in the series, though I never got into the main series when I was younger and still haven’t played more than 10 minutes of any entry that isn’t X-2, 12, or Ring of Fates.

Has anyone played World of Final Fantasy that came out last year? Because it’s legit good. 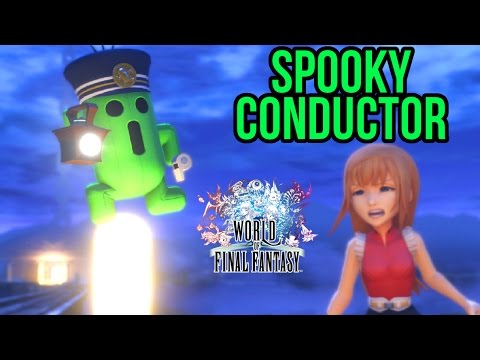 It’s like Pokemon, except you collect FF monster and can also summon a Funko Pop version of Cloud to fight for you. Also the localization team went bonkers on it.

Is Final Fantasy good under SSL? Let’s comment and find out!

I enjoyed the heck out of FF15, but I’m really only saying that as the person who has only played two FF games to completion.

Those two being Crisis Core and FF15.

But also wow, World of Final Fantasy actually looks cute as hell, maybe I’ll have to give it a try.

I’m surprsingly upset that FFXV doesn’t have some kinda co-op. Really want to goof off and take selfies in battle with my friends.

FFIX is my favorite, but I’m still crazy excited for the FFXII remaster (which is coming out in July, hell yes). I’ll defend that game’s crazy faux-Shakespearean translation to the grave.