HAVE YOU EVER WANTED TO HEAR TWO GAY DUDES YELLIN’ OVER RANDOM S/NES GAMES?

WELL BOY HOWDY DO I GOT A THREAD FOR YOU! So what’s this all about?

Grace and I have been playing a LOT of Metal Gear games recently, and we decided “What if we just played some random garbage?”

BUSTER YOU BETTER BELIEVE WE’RE JUMPIN’ RIGHT ON THAT!

We jump between games I know well and games I never heard of, but either ways it’s gonna get goofy as fuck! Revisiting two games I arguably own at! I love these games regardless, screw you

HAVE YOU EVER WANTED TO HEAR TWO GAY DUDES YELLIN’ OVER RANDOM S/NES GAMES?

I mean. I’ve never specifically woken up and thought that. But now that you mention it I can’t think of anything better. This should be a great ride.

love too stand by my favorite radio tower and do calisthenics

Spy vs Spy is really fun for roughly one and a half rounds!

The NES Ghostbusters appears to be an attempt to add more action elements to the game that I believe was originally developed for other systems. I first played the Apple IIgs version, in which you’re effectively running a franchise of the Ghostbusters business. You start with $10,000, which you need to use to buy your supplies, including your vehicle - I don’t remember whether there’s a way to buy more later in the game or whether you need to get by with whatever you can afford up front. There’s no fuel, and there’s only one ghost per haunting - the beams just block the ghost’s movement, and you have to time the trap correctly - if it goes off and doesn’t capture the ghost, one of your Ghostbusters gets slimed. Returning to the HQ restores all of your Ghostbusters and empties the traps. The game lasts considerably longer - I think your PK level gets all the way to 9999 before the game ends, and you can slow it down (in both versions) by running over the ghosts on the map and vacuuming them up. In the IIgs version, the Marshmallow Man also appears from time to time, and you have to drop bait to stop him from destroying a building. If you didn’t buy the bait, you’re pretty screwed. The endgame is much simpler - the Marshmallow Man just jumps up and down in front of the door to the building, and you have to get two Ghostbusters out of the four through the door without getting squashed. There’s definitely no stair-climbing. You win if you made a profit overall, and you get a password to start the next cycle with your increased funds.

That… actually sounds pretty rad, I might check that out. Honestly if I had bothered to get any ghost food I might have had a chance at the stairwell (It makes the ghosts go towards it as long as it’s on screen, and it’s the only way to make the bastards change what part of the screen they’re area denial-ing), but I legit thought I’d be long dead before it became useful.

I can attempt to record a video of it if you’d like.

Actually if we do another session of random roms, we might play that for the thread.

Also on a semi-related note, I found out today that the Ghostbusters multiplayer co-op in the 2009 game is just for random missions and not the story, so now I’m a lot less sad about not being able to play it co-op This game fucking owns, also Bucky O’Hare was the best kids show because instead of just sending messages like “sharing is caring!” and “get along with everyone!”, it also sent the message “DESTROY FASCISM”

It’s rare that a game makes you say “I cannot hurt Tennis”, but here we are. Also FotNS whips ass.

By the way, here’s a preview for the next episode, which I’m real excited about: 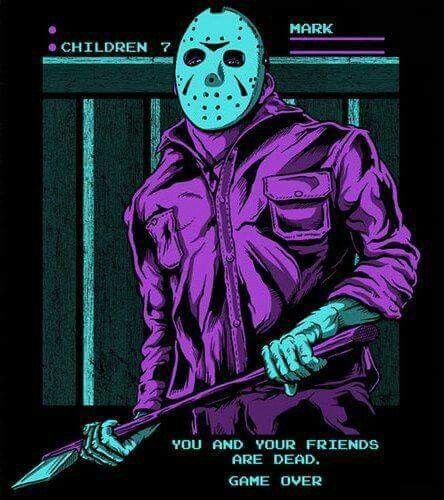 Well regarded as fucking impossible and one of the worst video games ever made, I actually kinda like it! It’s not a GREAT video game by any means, but it does a lot of interesting stuff (some of which I didn’t get to show off) and once you get into a pattern, you can start planning ahead and keep one step ahead of Big J.

I’ll admit, I do very much enjoy Punch Out Jason, though I think the axe is going a little overboard even considering the aforementioned game in which boxers use magic. After we ended this episode, a Hyperrealistic Mr. Nutz came out of my screen and turned my walls into blood, but then a Hyperrealistic Arnold Schwartzeneggar came out and shot Mr. Nutz. Thanks for not being mad about the terrible impressions, Arnold!

So uh, hypothetically if someone wanted to watch Sailor Moon in english but like, not the weird old one, is that an option

(Also sadly this is the end of the backlog for a bit, but we’ll definitely be recording more when we get a chance!)

Regarding Sailor Moon: Chibi-Usa did indeed use some kind of hypnotism power on Usagi’s family to make them think she was their daughter, and she kept getting between Usagi and Mamoru, so Usagi kinda hated her. So do most fans of the show, I think. As for the odd Sailor V/Sailor Venus thing, Sailor V was Naoko Takeuchi’s previous series, in which the V stood for Victory and she was more like a secret agent. Shortly after the series started, I guess either she or the publisher came up with the idea to have a larger team of girls, so she made Sailor Moon as a spinoff. The Sailor Moon girls made cameos in Sailor V as both series continued, until she finally brought Sailor V into Sailor Moon and revealed her to be Sailor Venus. It may have been a bigger deal at the time.

For our triumphant return to the 16-bit era, we’re playing a disney game I hate a bunch, followed by one I love a bunch!

There were a lot of shitty fucking Disney games on SNES

edit: Also, Ardy Lightfoot is a good game, and I will fight anyone who disagrees.