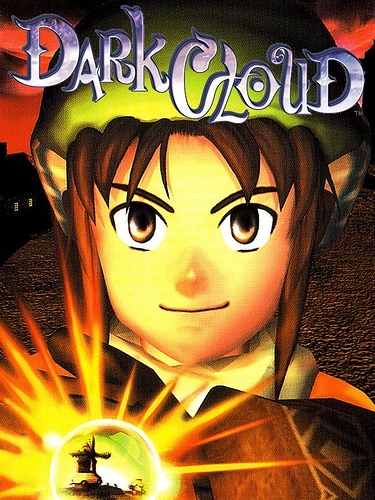 Hello there my friends. Welcome to my playthrough of Dark cloud, A clunky (not helped by a bad ps4 port) and slightly charming rpg created by level-5. Their first game in fact and it kinda shows…but believe me I snark because I care.

Joseph Stalin unleashes a terrifying world destroying abomination on the world of [insert world name] Our hero Toan (or as we shall get to know him Kazan) awakens to find his friends, family and village gone. Luckily an old man known as the fairy king saved them and placed them in Atlamillia a kind of magical maguffin. Unfortunatly they are blasted into dungeons…

I am YerPalHal I am kinda new to this the only prior lp I did was Jojo’s bizarre adventure eyes of heaven. An lp that might make it on this very site once I rerecord the final chapters of it. I am still very new to all this so err pardon my dust. I belong to a group known as the Jaded Desktop and select members of this group will be joining me on this little endeavor. My friend Kazan will be my constant co pilot and we drag our unwitting compatriot Hwhite with us.

Also theres nidoking from this very board who while not in any video feels like an unofficial fourth member thanks to all the feedback, tips and general knowledge of the game is helping make this thread a bit special.

This will be a 100 percent town and fetch quest run. I am NOT doing the demon shaft because even my dungeon crawling has limits. I will also be making liberal use of edits for later dungeons but I will try to show as much of the town building side as i can. Feedback is encouraged and while there is not much to spoil lets keep the future pcs and areas quiet until they show up in the game. So sit back, relax and join us every sunday as we enter into Kazans bizarre adventure…

The Story so far

The original trailer seen at the end of my previous lp

Book 4: The village in the desert

Book 6: The castle that time forgot

bonus the original trailer from my previous lp

Chapter 2 Lurse of the Lave Bats

sorry about the echo no idea what happened in this part

It’s a bit weird seeing you hang on to stuff as long as you do. That Fluffy Doughnut does nothing but boost your defense, and there’s no bonus for using it at a particular time (like the refills you get when upgrading health, thirst meter, or weapons), so you should use it right away.

In which great days happen as we explore the backdoors finally

In which we restore Kazans hometown. Beat up its god and guilttrip the real Kazan about the length between recording footage and commentary.

It’s all well and good to say you don’t like the fishing in this game, but surely you’re going to catch at least one Mardan Garayan, right?

I did I wanted to at least show off as much of the game as I could that isn’t the demon shaft. it’ll be in a later part as will the Baron Garayan doubt i’ll show off the common fish though i really do not like fishing in video games

It’s not so much for the fish itself, but for the reward you get for having caught it. I consider it essential as a quality of life matter.

theres been some issues getting part 7 ready i’ll try to post it later this week. if not i’ll do a double bill next sunday

In which we catch up to the opening of this thread. Due to a corrupted recording session we rerecorded and thus the episode pretty much just turned into a conversation between me and kazan about a lot of things in and out of game.

A second new episode will be posted tomorrow as an apology for skipping a week.

I think I neglected stray cat

OK, so you finally used the item that boosts your defense and has no downside. So is there a reason you’re not leveling up your base weapon so it does more damage, again with absolutely no conceivable downside? Or is that just another thing you forgot? You won’t take so long defeating enemies or use as many Repair Powders if you’re doing more than single-digit damage per shot, and you probably got enough ABS to upgrade it a few times in that single level. You’re going to have to do that for every character, unless you get lucky and find some weapons for them.

Also, when a floor trap increases your funds “a bit”, it doubles your money. Decreasing your funds a bit cuts your money in half.

poor stray cat you’re right i kinda pretty much ignored her in favor of the next ranged character so that is deinatly my bad on that.

It’s only a tiny bit painful to watch you use a Levelup Powder on a weapon that almost has full ABS just so you can pick up the most useless attachment in the game.

And in most games, there’s an effective way to fight the enemies that throw poison projectiles at you while remaining far enough away that you can dodge their attacks. You can take all the pride you want in not upgrading your ranged character, but you’re only hurting yourself.