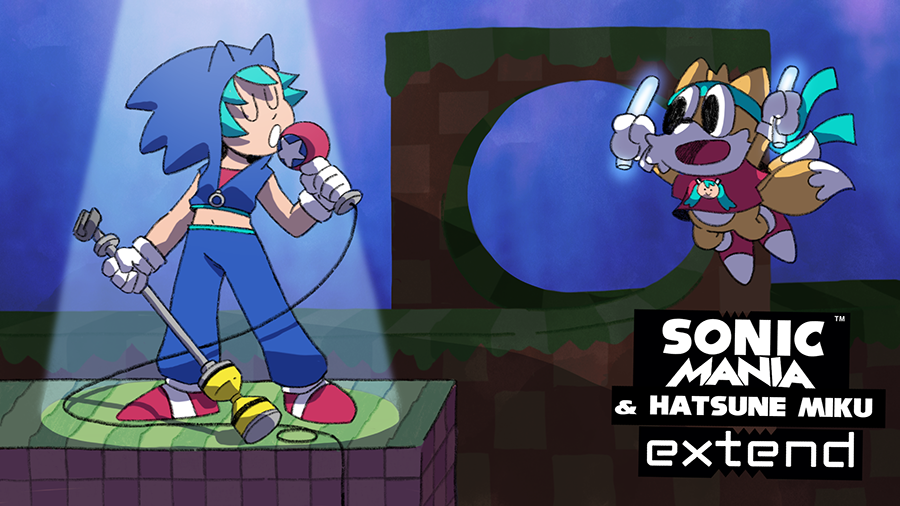 900×506
[Thanks to my good friend keroberrycola for the banner image!]

Sonic Mania is a side-scrolling platformer game released in 2017 for the eighth generation of consoles. It was released alongside Sonic Forces to mark the 25th anniversary of the Sonic the Hedgehog franchise, and directed by Christian Whitehead who is best known for his work in the Sonic fan game community. While Sonic Forces was meant to celebrate the legacy of 3D Sonic titles, Sonic Mania is focused on capturing the fan fervor for classic Sonic the Hedgehog. The game incorporates remixed versions of levels from classic Sonic titles in its story, while also updating the engine to allow for smoother gameplay. Critics raved about Sonic Mania, calling it a return to form for the Blue Blur after the low critical reception of more recent Sonic releases. An update to the game called Sonic Mania Plus was released in 2018 to add more characters and an additional game mode.

Sonic Mania & Hatsune Miku is a mod for Sonic Mania created by Tracker_TD in 2018. As the name suggests, the mod replaces Sonic the Hedgehog with Hatsune Miku the Virtual Idol, and updates the story and general aesthetics for the game to create a wholly new experience. The core gameplay is the same, but the packaging around it is fresh and exciting. Commentators raved about the mod, calling it “shockingly really really good” and “epic”. An update to the mod called Sonic Mania & Hatsune Miku: Extend was released in 2019 to update the new art assets and add support for the new content from Sonic Mania Plus. This is the version we’ll be playing for the thread.

I’m everyone’s favorite LP idol ChorpSaway and I will be rolling through these levels to show you the sights and sounds of this Sonic Mania mod. Joining me are my team of TheJayOfSpade “Tails” Prower, who is the Miku maniac, and thatnogofella the Echidna, who is the Sonic lore expert. Together we’re going to protect Sonic’s world and jam out to some J-pop.

I will be completing the game and collecting all the Chaos Emeralds for the best ending, as well as exploring the references and Miku lore items that have been added to the game.

this is incredible, I cant believe sonic managed to get miku to help him out like this. Miku! She’s so cool!

This is definitely how I should first experience Sonic Mania and no one can tell me otherwise.

As someone else who is also experiencing Sonic Mania for the first time, I think it’s for the best. This is clearly how the developers intended the game to be, they just couldn’t acquire the license or whatever.

Meanwhile, everybody at the Hatsune Miku concert is concerned and upset at the sudden appearance of an anthropomorphic blue hedgehog.

Gonna die laughing if it turns out this is true.

I choose to believe that Sonic improvises a full set and fucking slays it.

clearly a sonic underground reunion tour in the works

LaZodiac: This is definitely how I should first experience Sonic Mania and no one can tell me otherwise.

It’s still the only way I’ve experienced Sonic Mania and I don’t think anything’s been lost by this, only gained.

yerpalhal: clearly a sonic underground reunion tour in the works

Thank you for remembering Sonic’s short-lived music career. Of course he could stall for a Miku concert, depending on the song choice I don’t even think they’d notice for a while.

I will never not remember Sonic L’Rebelle, or as the dub calls it, Sonic Underground. It’s so good and also bad at the same time.

Sonic Underground was my jam when I was growing up.

As a child I recall that my dad went away on a business trip once and when he got back he gave me a copy of the kids menu from a restaurant he’d eaten at, because it was Sonic Underground themed.

It would be many years before I had any context for these other hedgehogs, all either of us knew about it was “oh cool, Sonic, Chowder likes that.”

Today, Miku will have to face off against our most dangerous enemy in our modern times: corporate brands! First she must come face to face with the past as she combats a mascot that she replaced, followed by the present where she must fight someone close to her. Will she have the heart to fight back against these threats, or will the pressure prove to hot to handle?

r.i.p. to most of the cute sega references in studiopolis

Fair, but now it’s Dominos references which have just about the same legacy I think.

Also, in case anyone is looking to join in the Dominos revolution, here’s a gif of the looping Scott bit from Act 2.

Unironically my favorite delivery pizza IS Dominos, for real. All the local pizzas are kinda trash.

Clearly, “Before My Blood Runs Dry” was chosen because this deep secret makes Miku feel so blue, like her Sonic outfit.

Also what song was Anime Airship Act 2 mixed with, I really liked it.