Hello! My name is Ashley, and I love the Banjo-Kazooie series, and Rareware as a developer. I’m here to take you on a walk through my favorite series of all time, the Banjo-Kazooie trilogy (or “Banjo-Triloogie” as I like to call it. The G is soft like in ‘trilogy’ not like ‘loogie’.)

I’ll be playing each game on the Xbox 360, and showing off the renewed Stop n Swop feature, which was originally a dummied out mechanic meant to carry data between Banjo-Kazooie and Banjo-Tooie, restored in the 360 versions. Joining me are my three closest friends, Amy, Alexa, and Demotick, as rotating co-commentators.

Banjo-Kazooie was released in 1998 on the Nintendo 64 by Rare. It’s a 3D platformer starring both a bird and a bear. Released when I was five, it quickly became my favorite game. And nearly twenty years later, I still feel the same!

This version of the game is from the Xbox Live Arcade, because it’s the best version I’ve ever played. It features cleaner graphics, smoother framerates, and the long rumored Stop n Swop. The improvements they made will make your eyeballs pop!

My name is Ashley, and I will be playing. Rotating guests Amy, Alexa, and Demotick will be surveying. Join us for good times galore. I hope you don’t find these videos a bore!

Banjo-kazooie was literally the first video game i ever played lol. never did finish nut and bolts I own it thanks to rare replay but that game is just painful if you do play through it that’s be cool. the whole series is real good.

Banjo-Kazooie was my first LP. It’s pretty much a perfect game, with just the right amount of challenge, plenty of different stuff to see and do and little-to-no filler so it never outstays its welcome. Later games in the series weren’t so masterfully designed, but I at least kinda like any game with Kazooie in it.

I’ve learned so much in just these first videos, like I always wondered if breegulls were a real thing. Kinda dumb in retrospect, I should’ve just assumed that a pun on “seagull” was probably not real.

Changing the way notes work was really nice of the developers. I replayed the N64 version a week ago, and I died in the final world with 94 notes collected. It was not a pleasant experience. Even so, I’m sure that some people still prefer the old note score system to the new one. It probably would have been a good idea to include the option to play with the old system.

I’m so incredibly excited to see this thread pop up. Banjo Kazooie has always been one of my favorite games of all time, so seeing it played always makes me happy. Tooie I didn’t play till years after it came out, but I loved it just as much, maybe even more than the first. Nuts and Bolts, I… played but never finished. I got pretty far! I unlocked the final area, but never went into it, because I wanted to finish collecting all the jiggies I could, and then ended up losing interest. I’ve never understood the pure unadulterated hatred a lot of people have for the game though. It wasn’t quite the Banjo we know and love, but it was still a fun game, with the same humor we know and love, at least in my opinion! I’m looking forward to following this thread through to there!

I really love Nuts and Bolts, which is uncommon among big fans of the originals (but I’ve met a lot of people who have never played the originals who love it)

You can probably expect a pretty positive outlook on the game when I get there.

Have you played Cargo: A Quest For Gravity? I’ve never played Nuts and Bolts, but the two seem pretty similar and I do love cargo a lot.

I really enjoyed Rooreeloo’s LP of this game, so I’m looking forward to another good one in not terrible video quality. Enjoying it so far! Really excited for Nuts and Bolts though.

It’s probably a bit early for this question, but when you eventually get to Nuts and Bolts are you gonna take suggestions from the thread for weird vehicles to make? It’s practically tradition whenever someone makes a N&B LP.

Have you played Cargo: A Quest For Gravity? I’ve never played Nuts and Bolts, but the two seem pretty similar and I do love cargo a lot.

I haven’t, but I’ve seen some of it and it looks like something I’d be way into.

[quote=“dijondujour, post:10, topic:1657, full:true”]
It’s probably a bit early for this question, but when you eventually get to Nuts and Bolts are you gonna take suggestions from the thread for weird vehicles to make? It’s practically tradition whenever someone makes a N&B LP.[/quote]

Yes, absolutely. I’d love to do the “send me your blueprints” thing, but I understand that they shut the servers for blueprint sharing down? Suggestions from the thread would absolutely be welcome though. 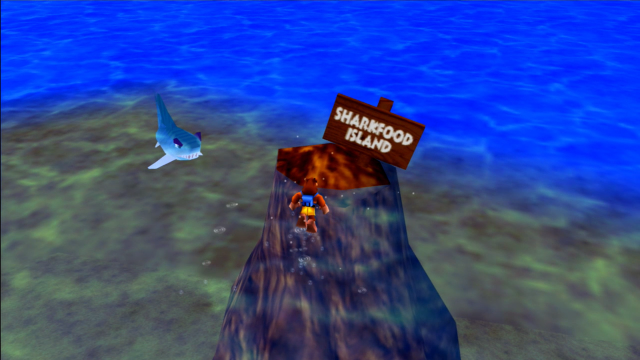 On the list of ‘terrifying water enemies,’ Snacker is surprisingly low. Like, the Cheep Cheep from Mario 64 is way worse. Though I’ll give the designers one thing: placing two health upgrade items in areas you’d need to cross Snacker for? Pretty devious.

Lurker Sharks are definitely among the worst, though. Fuck those guys.

For some reason the only time Snacker scared me was when grabbing Jinjo under the starting platform. Probably because needing to dive for it means you have to worry about drowning and being attacked, combined with the fact that I didn’t know you could kill Snacker until I was older.

I think Treasure Trove Cove is my favorite stage in Kazooie, though the final real stage gives it some tough competition.

I also didn’t know about killing Snacker until recently. Part of why I showed it off was because I thought some people might be seeing it for the first time.

And yeah, the Jinjo is the worst of all the collectibles in Snacker’s territory. 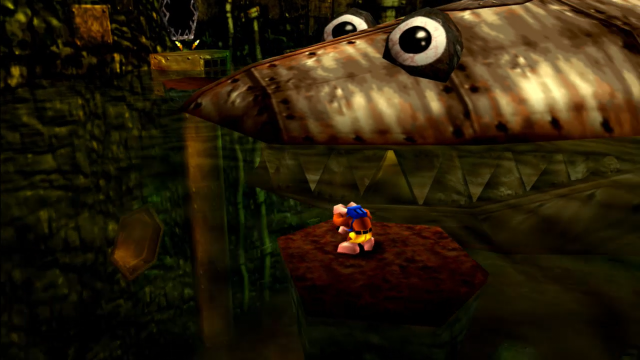 It’s my debut!!! I’m so sorry for my terrible Bottles jokes.

It wasn’t until I started playing this game on the Xbox 360 that I realized the triple peck attack (or Rat-a-tat Rap as it’s officially called) is the solution to every problem. Many breakable objects can only be broken with that attack and it out-damages almost everything else, so if you can use it, it’s almost always the correct answer. I considered it useless my entire time playing on the N64 because it always made me jump over my intended targets, so I never figured out that I had to use it to unlock the second-to-last level of the game. 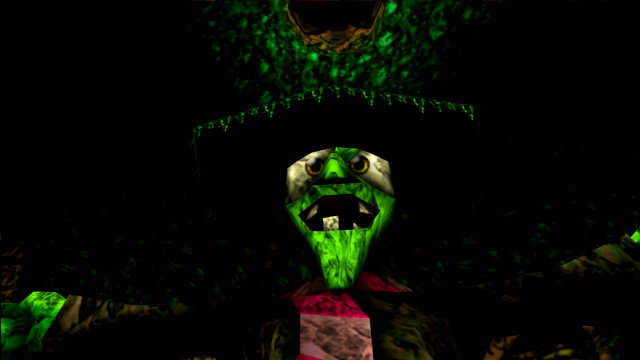 Grunty would clearly be in a sludge metal band, duh.