Brave Fencer Musashi is an action rpg developed and published by Squaresoft for the Sony Playstation in 1998. If you asked me to sum up what this game is in one sentence I would say, “Its like the Legend of Zelda except Link has radical hair and two swords; and there’s bit of Kirby in there too.” This is a silly game complete with a smorgasbord of puns to sink your teeth into.

The story doesn’t really unfold until after the first chapter, but luckily the game’s manual can fill us in on the details:

The Legend of Musashi

Over 150 years ago, a giant monster suddenly appeared in the Thirtquencher Empire, neighboring country to the Allucaneet Kingdom. This monster was known as the Wizard of Darkness and was a huge creature made almost entirely of a powerful crystal known as Binchotite. After easily destroying the Thirstquencher Empire, the monster made way for Allucaneet, seeking the bountiful supply of Binchotite believed to be buried there. The monster destroyed everything along the way. It is believed that many creatures were born of this destruction as the Wizard of Darkness had a strange effect on everything that crossed its path.

Upon hearing of the Wizard of Darkness’ approach, King Allucaneet ordered the Hero Summon spell to be cast. The Hero Summon spell is a special magical power that is handed down, generation to generation, amongst only the princesses of Allucaneet. A Closely guarded state secret, this power is only used as a last resort when the kingdom is faced with great danger. It grants its user the ability to summon a hero through incantations made over a specially prepared crystal of Binchotite. The summoned hero called upon to defeat the Wizard of Darkness was a two-sworded fencer named Musashi. Musashi accepted the princess’ task and set on a journey to defeat the Wizard of Darkness.

It is said that Musashi then divided the power of the monster into the five elements of Earth, Water, Fire, Wind, and Sky, and then sealed them within five crests. These five crests became known as the Five Scrolls and in the years to follow passed into myth along with the legend of the brave fencer, Musashi.

As if the Thirstquencher Empire had timed its invasion according to their absence, the invasion began with one specific goal in mind; to capture Lumina, the Sword of Luminescence. Unable to repel the surprise attack, Allucaneet’s army lost ground quickly while the enemy pressed on toward the castle. As the Thirstquencher army approached the castle, the senior members of Allucaneet realized that their only hope would be to summon a hero.[/details]

This will be an informative LP for the most part. However, I’m more than likely gonna chill out and enjoy the game rather than going out of my way to cover everything, but I’ll try to cover as much content as I can.

While this game is old I would prefer no one spoil anything that happens outside of what is covered so far. Musashi
A brash fencer summoned by Prinecess Fillet of the troubled Allucaneet Kingdom. He has a fondness for duels and rice balls. After learning that he won’t be able to return to his home world until he fulfills the wish of the princess, he reluctantly becomes the hero desperately needed by the kingdom. Princess Fillet
The daughter of the king and queen of Allucaneet. She summons Musashi by casting the Hero Summon spell. Because she is a tomboy at heart, those around her have difficulty keeping her under control and out of trouble. 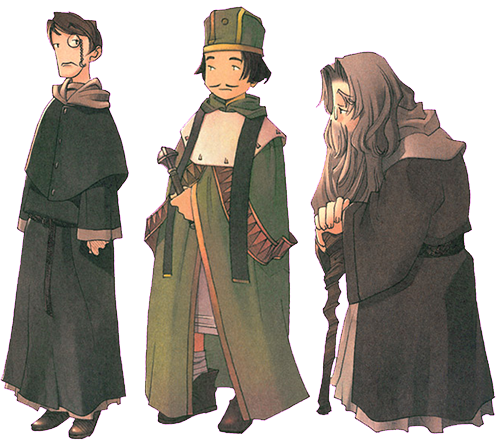 Butler Livers, Scribe Shanky, and Steward Ribson
These three statesmen aid King Allucaneet in governing the Allucaneet Kingdom. Taking care of the mischievous princess is a constant headache for them. Rootrick
A Thirstquencher Lieutenant who leads the Empire’s military force. Though not especially clever, he is persistent enough to get in Musashi’s way. 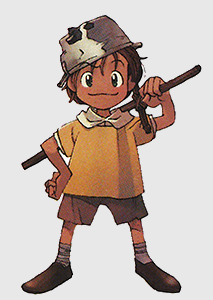 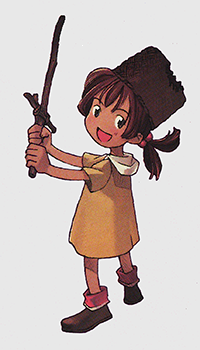 The son of Hilda (owner of the Grocery Shop), Tim (left) is a rambunctious boy with a lot of big ambitions. His dream of conquering big adventures lands him in sticky situations on occasion. The daughter of Hotelo, Mint (right) is Tim’s loyal friend and join him in his adventures.

Mayor McGoven
Grillin’ Village’s leader, Mayor McGoven always has a task for Musashi to complete. Although at times it may seem that he leans on Musashi too much, his concern for his village is genuine. 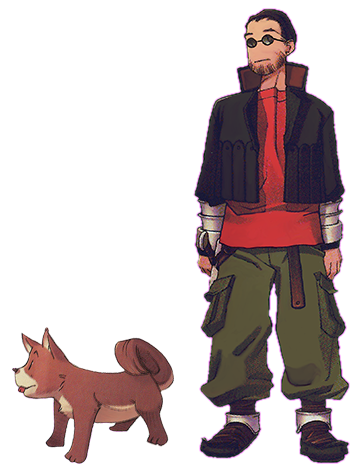 Jon & Leno
A wandering treasure hunter, Jon travels the world with his loyal dog, Leno. Musashi first runs into Jon during his quest to find the Five Scrolls, but only receives information concerning the different pieces of Legendary Armor. Musashi can rely on Jon for important information throughout his journey, but how does Jon know so much? Isn’t he just a treasure hunter? 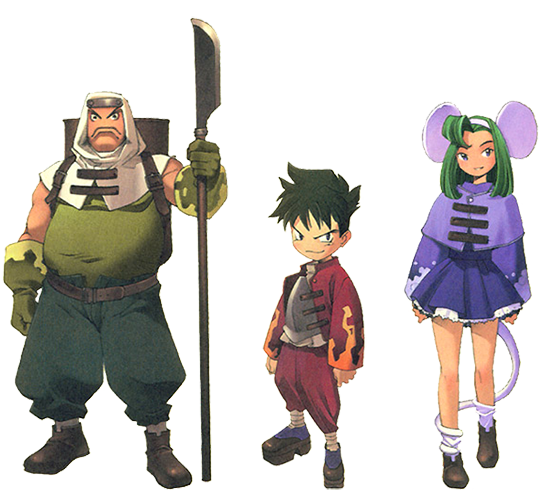 Ben, Ed, & Topo (Leader’s Force)
Topo (Right), the mouse-eared dancer, loves raves music and declares herself the leader of the trio. Ed (middle) and Ben (left) also claim to be the head of Leader’s Force, but instead of dance parties, they prefer to steal precious items from Allucaneet’s citizens. 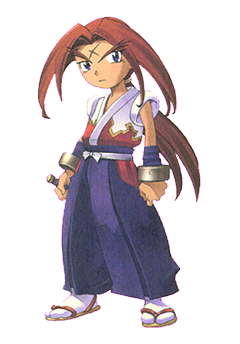 Kojiro
Kojiro is a mysterious swordsman summoned into the world of Allucaneet by Princess Fillet’s second Hero Summon spell. It appears that Kojiro has some old gripes to settle with Musashi, and will stop at nothing (including joining Thirstquencher’s efforts) until he has the ability to challenge Musashi to a good, old-fashioned duel. Things are off to a rolling start as we’re sent to retrieve Lumina, the Sword of Luminescence.

After that we’re introduced to the meat and potatoes of the game, Grillin’ Village. Also since the first video is mostly talking to folks, have another video on house.

I am amazed with how every single character in the opening has a different style of speech. It’s like they are each from completely different time periods.

I’ve never played this game, but I’ve heard the name thrown around a lot. So far it has some very typical PSX era stuff and I kind of wish I played it myself back in the day.

Instead I played Gex games.

I’ve haven’t played much of the Japanese version, but I think all the characters had a specific way of speaking that doesn’t translate to English very well. The most noticeable being Rootrick who would punctuate his sentences with a ‘P!’ or ‘PING!’ I’m guessing that the localization team tried to create a similar effect with having everyone speak in different styles.

Well since everyone else is jumping straight to their latest update and because I’m lazy, let’s do the same.

Here’s all the previous updates if you prefer to follow along this way:

Today Musashi does battle with the second crest guardian and finally puts an end to this chapter. Here’s a link to the battle theme. It’s really good!

Library Books
The Empire
(I’m leaving out the Shogi book as we’ll refer to it in the next chapter.) Today marks the start of a new chapter, and it’s one heck of a start as Musashi is offered the opportunity of a lifetime. Can Musashi handle the heavy responsibilities of being mayor? Probably not. Ben & Ed
The jerks who stole the church bell. Might be involved with the Thirstquencher Empire.

This mayoring business is harder than it looks, good grief.

Hey, Combat Lobster! I wanted to let you know that I found your thread and will be following it! I usually just watch your LP from a subscription on Youtube itself, but we’ll see what fun stuff you have to offer here.

Added a character profile for Ben and Ed, though their in-manual description is a tiny bit spoilery so for now I’m just gonna mention that they stole the bell and that they might be apart of the Thirstquencher Empire.

I put in an order for the strategy guide. Not because I need it cause I already have it on pdf; but because I want to have some high-res scans of the art in that book. So look forward to some of that soon. 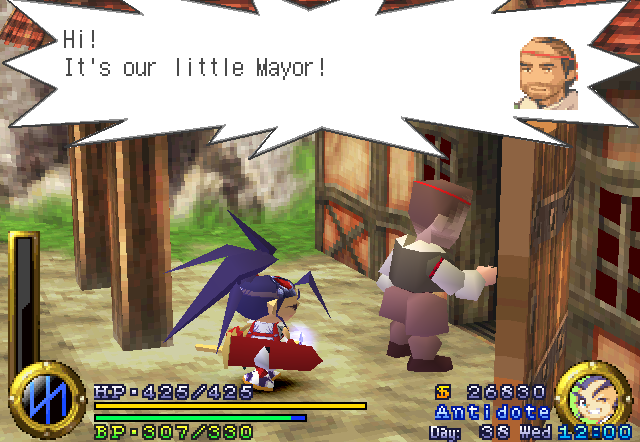 Things are not looking good for Grillin’ Village as everything is on fire! Can Musashi save everyone before they’re burnt to a crisp?

Sorry about the audio in this update. I got a new mic, and I’m still playing around with it to get the right settings. Also the strategy guide arrived earlier this week, so I’ll try to scan and clean up some interesting stuff in it. And I’ll be adding them to the second post over the next few weeks so be on the look out for that.

Duel at the Island of Dragons. Enter Kojiro, the Rival.

Kojiro
Kojiro is a mysterious swordsman summoned into the world of Allucaneet by Princess Fillet’s second Hero Summon spell. It appears that Kojiro has some old gripes to settle with Musashi, and will stop at nothing (including joining Thirstquencher’s efforts) until he has the ability to challenge Musashi to a good, old-fashioned duel.

Are Musashi and Kojiro voiced by the same person??? That’s not going to get confusing at all.

I thought so too, but according to IMDB Kojiro is voiced by Barbara Goodson (Chiyo from Naruto). I guess she and Mona Marshall just sound very similar or maybe the voice director wanted her to sound like Musashi but more intense.

I can’t believe it took this me this many episodes to notice that the castle gate Musashi runs past is still a busted up hole in the wall from where he threw Steam Knight into it. There are just so many fun details (like the plant enemies growing in size when you use the water scroll on em, or bread going stale over time in your inventory).

Hmm, the symbols on the calendar looks like certain scrolls we’ve been collecting, but there are seven there and there are only five known scrolls? Interesting little wrinkles in this update for sure!

Okay, the first wave of artwork has been added to the OP. Here’s a list of everything added. Also, I know it was noted somewhere in one of the previous updates but since this thread is on a new forum… If you’re ever curious about where I am in the production cycle of one of these updates I’m usually tweeting about it.

Jon & Leno
A wandering treasure hunter, Jon travels the world with his loyal dog, Leno. Musashi first runs into Jon during his quest to find the Five Scrolls, but only receives information concerning the different pieces of Legendary Armor. Musashi can rely on Jon for important information throughout his journey, but how does Jon know so much? Isn’t he just a treasure hunter? 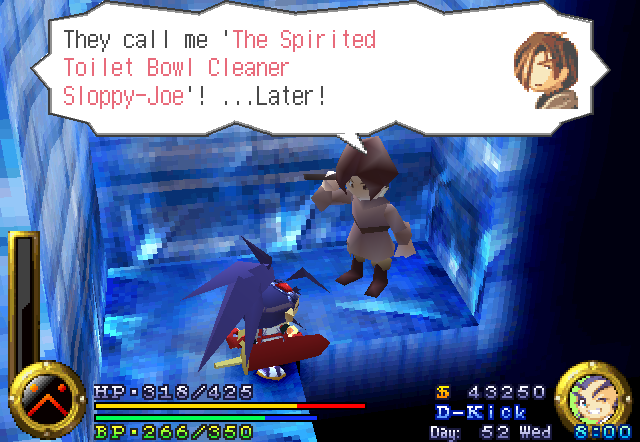 The search for the thieves’ hideout is underway. The only problem is, Musashi doesn’t have a clue where to start looking! Luckily, the palace’s mercenaries have a lead that could help Musashi, but it’s a coded message! Can Musashi decode this cryptic message or will it be checkmate for Musashi? Find out today!

Also sorry for taking so long on this update. Lots of real life stuff got in the way of me working on this as well as my usual laziness. So to make up for over a month with no content, have a second video to cap off Chapter 4.

That training montage was wonderful. Glad to see you’re still working on this. Your LPs have always been very enjoyable to watch. Looking forward to the next one!

Just found this LP. Nice job sequence-breaking for the L-Vest. I remember posting a video about fighting Relic Keeper with the L-Vest in a different BFM LP thread elsewhere. Pretty cool to see other people doing it, too.

Not gonna lie, over the course of this LP I have been reading through the thread you’re talking about, combing it for information I could use. And your video happened to be where I learned about that trick.