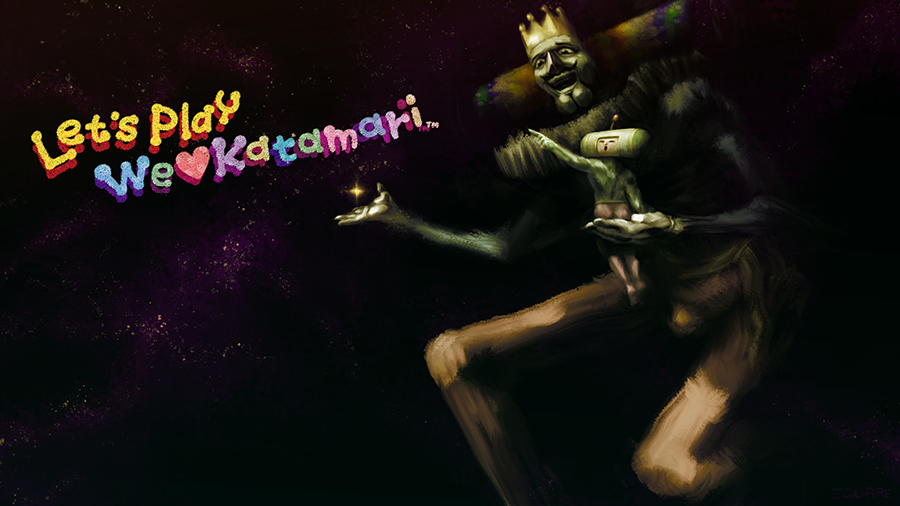 After Katamari Damacy was released, creator Keita Takahashi wasn’t sure about making another game in the series, citing that he didn’t see much fun and excitement in creating sequels. However, after seeing the significant fan response to the original game, and knowing that Namco was going to create more Katamari games with or without him, Takahashi decided to helm the production of We Love Katamari, which would end up being his last involvement with the series.

“I’m very honored that Katamari Damacy received various awards, and that it was called ‘innovative,’ but the most important thing is that people can laugh and enjoy themselves.”
-Keita Takahashi, Director

We Love Katamari is a puzzle-action game released in 2005 for the PlayStation 2, and a direct sequel to Katamari Damacy. The story is metatextual, focusing on the King of All Cosmos’ surprise at the success of the original Katamari Damacy and working to appease the people of Earth, who have become huge fans of him and the concept of Katamari. As before, the King is far too busy to do any work and actually handle any requests from his fans, so it’s up to the Prince to roll the world up once again. The gameplay is more polished but nearly identical to the original game, focusing on rolling around large environments and picking up progressively larger objects in order to create new celestial bodies. The improvements made were to enhance and expand upon that core experience, including being able to play as the Prince’s cousins and adding additional accessory slots, as well as providing more environments and alternate tasks to the levels. And with the humor as sharp as before, We Love Katamari is just as much of a joy to play and experience as the original.

“It may look like I’m just messing around, but really, that’s what’s really lacking in games today. We’re making games, so come on, we need to make [them] more silly and fun…I wanted to make this game something that anybody could play casually and lightly, even more so than the original Katamari Damacy.”
-Keita Takahashi, Director

I’m LP’s miniscule Prince ChorpSaway and I will be rolling you along as I show the ins and outs of this very special game. Joining me are my Second Cousins TheJayOfSpade, FutureFriend, and Taoc, who all have varying experiences with the Katamari series. Together we’ll play among the stars and banter our way through the cosmos as our celestial king belittles us from afar.

I will be collecting and showing off all of the Cousins and accessories, as well as completing every unique level in the game. That’s right, even THAT level.

Heck yeah, Katamari! I’m so happy to see you play this, it’s so fun.

It’s time to talk home maintenance! This week, we’re taking on two planet requests all about cleaning up after other people, and thanks to the King’s strict chore chart with the Prince we’re more than prepared for the job. As well, we talk a lot about home security and all the different tips and tricks to leading a safer, happier life!

I love these little 8bit cousins in the video links. They’re so cute~

After spending all of last episode doing work indoors, it’s time for the Prince to go and enjoy the wonders of nature! First, we take part in a little art nouveau as we work on flower arrangement and collection. Then to cool off, we take a dip in the lake and find out if life truly is better under the sea!

A fun detail about this episode’s backstory scene; we see that their family name is Cosmos, so we ca assume everyone follows the naming scheme of King of All Cosmos.

Ichigo of All Cosmos is pretty good, but I wonder which is the best…

Alright everyone, recess is over and it’s time to get back to class! Today, we’re visiting an Earth school to show these kids what our royal profession looks like, to prepare them for everyday life should the monarchy be reinstated. Then, we join a couple of kids for an after-school treat, and they’re not satisfied until they’re absolutely drowned in desserts!

A fun detail about this episode’s backstory scene; we see that their family name is Cosmos, so we ca assume everyone follows the naming scheme of King of All Cosmos.

Ichigo of All Cosmos is pretty good, but I wonder which is the best…

My vote is for Nutsuo of All Cosmos, personally.

there she is, the best cousin in the series

The king has once again seen fit to grace the world with his divine presence! In our first mission of the day we help an elderly man pick out a video game as a gift, and our first choice is obvious. Then, we take time to relax and enjoy community with a fireside celebration at the campsite. That’s not all though, as we take a deep dive into what makes a monarchy rule!

Monarchy Rules as we get the crown jewels. A wonderful combination!

I feel like, for some reason, Kinoko is my favorite cousin.

After a couple of relaxing missions, it’s time to shift into overdrive! First, we have to head down to the racetrack and help a driver pick up at least one car, but things get tricky after the King makes some adjustments to the Katamari. Then, we slow down a bit and help coach an up-and-coming sumo wrestler mere minutes before his debut, making sure he’s fit for the match!

Oh cool these two stages have some of my favorite musical tracks in them.

It’s always work work work for the young Prince when it comes to Katamari, but it’s important to remember to have fun as well! Our first mission has us meeting a cramming student who doesn’t have the money necessary to keep his power on, so he needs a new way to study in the dark! Afterwards, we decide to take a vacation up north for an easy breezy sort of mission: let’s make a snowman!

I do not appreciate Lalala because some of my friends call me Lala and that’s way too close.

God, it’s a shame the firefly level is kinda… frustrating to navigate, because it is quite calming. Snowman building is also quite relaxing too. What a good game.

It’s a long drive to the next cutscene, so let’s take it in steps! In today’s video, we’re tasked with helping an old lady recapture her youthful vigor. And of course, what could provide more innocent fun and joy than rolling up a Katamari? It may take a bit for her to catch up with us though, so we’re taking a nice scenic view of the area!

God, it’s a shame the firefly level is kinda… frustrating to navigate, because it is quite calming. Snowman building is also quite relaxing too. What a good game.

Unfortunately that comes to an end here as we help high-octane grandma get her kicks!!!

High-Octane Grandma got her kicks, but I hope it brought her happiness.

Today, we decide to only take selfless requests! Our first client has a sick friend who needs 1000 paper cranes in order to get a wish and help them get better quicker, but they got scattered around his school before the mailman came. Then, we help a man collect donations in order to protect the red pandas, whose dietary needs are not being taken care of in their current habits! Also, we may have had a short break, but the cousin parade returns!

“The King as a young person” because, truthfully, we all know the King was never a child.

I love that Odeo’s pochette is a medical kit. What a safe boy.