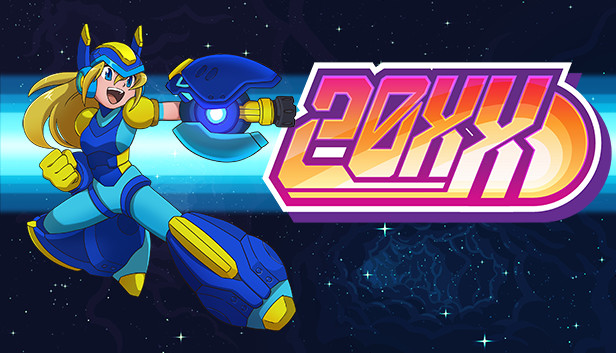 20XX is a 2017 side-scrolling action platformer by Batterystaple Games and Fire Hose Games that’s unafraid to admit it’s a total Mega Man X clone. They’ve smartly taken it in a different direction by restructuring the game as a Roguelike: if you die the run is over, level layouts are randomized, upgrades/weapons/armor found on each run are lost with death, and only upgrades bought at the hub are permanent. Some flexibility is given to make the game easier to approach: there are difficulty settings including an easy mode with lives, spikes and bottomless pits aren’t instadeath unless you select it as a handicap, etc. A frustrating pisser like Spelunky this ain’t, but it’s still going to expect some serious reaction time and multiple playthroughs before you even reach the final boss the first time. But all of that plus tight controls, an excellent chiptune soundtrack by Cityfires, and a lot of replay value add up to what was essentially the only great Mega Man game for years until 11 came out.

The story is such: You are blue, shooty girl Nina and red, slashy boy Ace (and maybe the DLC characters if you bought them), Action Contractors! Basically bot-killer mercenaries, hired by Dr.'s Flat and Sharp to save the city from a killer robot outbreak. A simple story given some complexity once you realize the Roguelike elements of the game are plot-relevant, and the doctors are not your friends.

The LP:
This is a thorough look at the game; not a 100% LP, but I will be completing the game on every difficulty at least once, and completing at least one run with each character including DLC characters Hawk and Draco. Rush Job and Multiplayer will get videos of their own, while the daily/weekly challenges will just be shown off briefly, since they’re basically just specific seeds that you might run normally anyway. Since there are so many augments you can unlock, I’m not worrying about buying all of them, and you’ll get to see many of them in the challenge modes anyway.
I’m also not worrying about the datalogs since everything’s already been archived on the obligatory wiki. Spoilers for absolutely everything ahoy.
I’m joined on this excursion by JigglyJacob, a fan of Mega Man whereas I’ve played jack shit. He will also be my multiplayer partner when we can get around to it.

Clearly the reason my first run failed was because it wasn’t hard enough.

Enjoying this one so far and looking forward to more!

If at first, second and third you don’t succeed, get pokey.

But what is normal for Nina, no one knows.

A rush in more ways than one. Lets, uh, just stick to one.

Look, to be fair to the thousand cuts blades, they’re actually extremely good at cutting down bosses. I honestly prefer them over the axe, if only because the axe has been the cause of several deaths due to me using the jump attack incorrectly.

Yeah, if you stack enough +attack upgrades (my mind blanked and I can’t remember what they’re actually called in this game) and got good enough at figuring out boss attack patterns, you could probably melt boss HP bars more efficiently than with the Quint Laser using Ace’s Beam Crissaegrim. You’re definitely in a higher-risk/higher-reward situation with that than some of Ace’s other weapons, though.

Let’s try out the DLC characters, Draco and Hawk. Specifically, let’s suck at Draco and stick to Hawk.

Let’s try and complete a Defiant run this time.

Similar but unrelated, I checked out Dragon Marked for Death yesterday, which is a bit like Mega Man Zero meets Monster Hunter (or so I was told):

Apologies for completely forgetting to put this up last week. This is the last part before a small hiatus, wherein I do one more successful run of Defiant with skulls active to unlock something cool.

Jacob joins me for a run of multiplayer with our two core heroes. Next week we’ll conclude the LP with a co-op run of Draco and Hawk.

I’m impressed, Thorn! You seem to be pretty active recently

I’m lucky enough to be able to do LPs full-time, so I try to keep the schedule full

Well, I hope that you do it in a way that avoids burnout, but I guess that is straying from the topic at hand. I have never actually heard of this game before, but I do like what I have played of Mega Man X so maybe this is one to look out for.

That’s it from us for 20XX, folks! Thank you all for watching, and hope you enjoyed the LP. Jacob and I had a lot of fun with this game, but we’re ready to put it to bed after a couple runs of co-op Draco and Hawk on the harder difficulties.
No current plans for another game to fill its slot yet, but I’m sure something will come along before long.

@Admods This thread can be moved to Completed now. (Also, so can the WarioWare Gold and Zelda: Breath of the Wild threads I forgot to archive last year.)