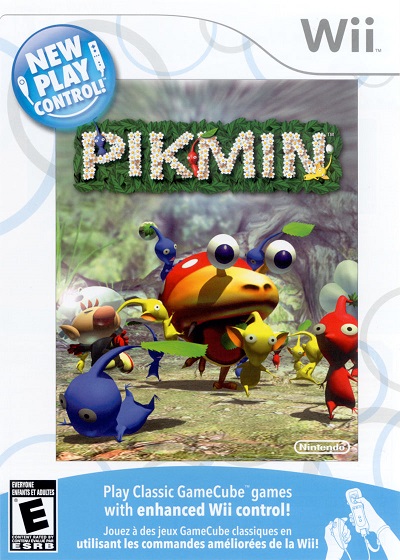 The game
Originally released in 2001 on the GameCube, Pikmin is a creative spin on real-time strategy and puzzle games. You play a tiny alien the size of a quarter who crashlands on an unknown planet, discovers the titular plant-like creatures, and grows and guides them to do your bidding. Supposedly inspired by Shigeru Miyamoto’s time spent in his garden, the gameplay concept combined with the ant’s-eye-view of a gorgeous slice of nature earned this game many adoring fans to this day, though both the GameCube and Wii versions of the original are considerably rougher than the more refined sequels.

The story is such:
You are Captain Olimar, intrepid deliveryman for the planet Hocotate’s premiere interplanetary money losers, Hocotate Freight. While out in space, Olimar flies right into a meteor and crashlands on an uncharted planet. His ship wrecked and missing 25 key parts and 5 unnecessary extras, and his space suit’s life support set to run out in 30 days, all seems doomed… until he walks two yards to the left and discovers a tiny, plant-like creature that responds to his commands. Dubbing them Pikmin after their resemblance to his planet’s Pik Pik Carrots, Olimar proceeds to grow a massive army of Pikmin to recover his ship’s parts and hopefully make his way home. But it won’t be easy when his army is made up of every other creature’s lunch…

The LP:
Mugiwara Yoshi once again takes the lead. He’ll be playing the Wii New Play Control version on the Wii U eShop, and he’s shooting for completing the game in under 10 days. He originally intended to make this a 6 Day Challenge speedrun, but that proved insurmountable. I (ThornBrain) have also played and beaten the game a few times, though I’m more familiar with the original GameCube version. Our friend Travis also had enough free time to join us for Days 7-9.
We’re putting Pikmin 3 on pause to do this because TheStrawhatNO!'s 9th anniversary passed on April 13, 2019, and Pikmin was the first LP Yoshi and I did just the two of us back on an old LP channel. We thought we’d revisit this classic and do it better this time, and to have videos available somewhere after BlipTV died and took the original LP with it. However you can see us rewatch one of the surviving parts, along with several other old and obscure videos, on our TSN 9th Birthday Celebration stream.

We of course also LP’d Pikmin 2 back in 2012, but it hasn’t aged particularly well for a number of reasons. I instead recommend watching the Best Of compilation, which sifts out most of the cringe-inducement: (Part 1, Part 2).

“This will be a more casual run”

So Yoshi is only going to break the game’s arms and legs instead of its spine.

I played Pikmin 2 a lot more than Pikmin 1 and that is entirely because of the 30-day time limit. I finally forced myself to play and beat Pikmin 1 the week before I started college, and I didn’t even reach Day 20 before I beat the game. I genuinely think each Pikmin game is better than the last (with the exception of Hey! Pikmin. I’ve never played it, but I think it’s too different to really compare to the mainline games), but I’m more likely to replay Pikmin 1 than Pikmin 2 just because I can finish it so much faster.

I can’t really agree that Pikmin 1 is the “darkest” because Pikmin 2 and 3 deal with problems on a much grander scale like unrestrained capitalism and world-wide food shortages, but Pikmin 1 is the most personal in its darkness and melancholy. 2 and 3 are scary in the abstract, but 1 is scary no matter how you look at it.

You’re off to a good start, guys!

Let’s chew through half of the second area with some good ol’ sequence breaking.

Enjoy Yoshi burning through the second half of Forest of Hope without blue Pikmin and makes Olimar a superhero while I go see Endgame.

A childhood terror turns out to be kind of a breeze.

Two short days in one. It’s getting awfully wet around here.

So the yellows got electricity immunity in two, along with rock bombs being universal right?

In 2 they’re too big to be used and just explode where they are, but yeah they’re universal in 3.

The SS Dolphin is nearly rebuilt, and it’s a lot easier when most things are already dead.

Thus concludes our return to Pikmin. Pikmin 3 will be back on Friday for three more parts before it also concludes. Then, look forward to Yoshi’s LP of Star Fox Adventures!