We Decided To Mario Party.

Hey there, I’m JetGrind, you may know me for that time I played through Battleblock Theater and had a perfectly good and fun time with my friend Dup, or maybe that podcast I host with Dup and Zen. That me and Dup just hate each other isn’t a secret or anything, so we decided we would do the dumbest possible follow up to Battleblock we could think of.

Every N64 Mario Party (maybe Gamecube too, I’ll get back to you on that).

The cast will always feature myself and Dup, but we also have a rotating cast of sucke-err, guests that we’ve dragged along for the ride. Come along as we experience Mario Party so you don’t have to.

Can’t wait to see someone else suffer through Mario Party besides my husband and I. God speed you poor fools. I wish you the best journey.

There’s a new episode! Come along as we go on a nice island vacation filled with floaties, stars, and a happening space or two, on the beautiful and scenic Hell Island!

So that’s why all Mario Party games start with the players falling! They’re all falling into HELL.

edit: holy shit this is the map that panzer and kaubocks played in half-life

Sorry for the late episode, but we’re back to take a trip to Wario’s Battle Canyon for Toad’s Nihilism Power Hour! (Guests: Zen and PanzerSkank) 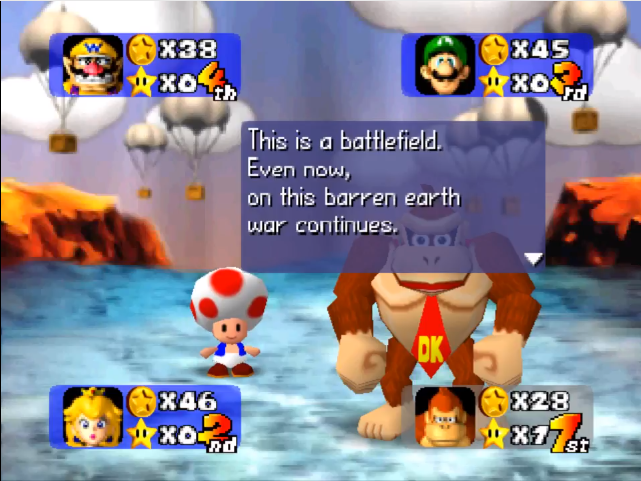 Whoops! Fixed that issue, thanks for pointing it out! I somehow forgot the h in https when copying…

It’s been quite a while (blame Dup), but we finally have a new episode! Enjoy Episode 5: Welcome To My Fuck Bin!

It’s been about 18 years, give or take a few months, but we finally have a new episode out! Come hang out with us in Episode 6: Mario’s Sex Castle!