Two Mouthfuls at Once - Let's Play Kirby 64: The Crystal Shards 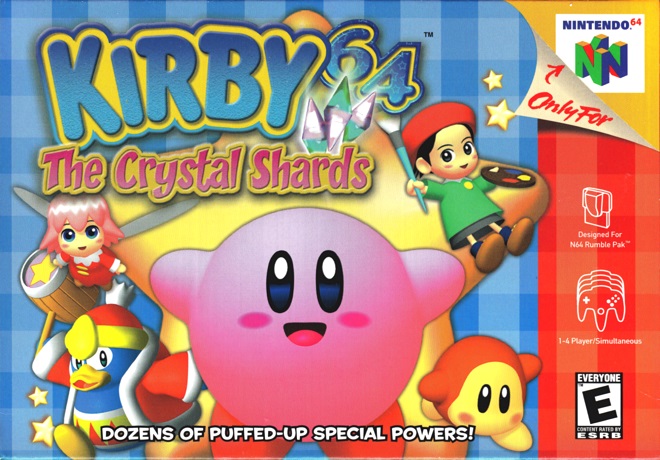 The game
Kirby 64: The Crystal Shards is the adorable walking mouth’s only N64 title and a sequel to Kirby’s Dream Land 2 and 3, the last of what fans have dubbed director Shinichi Shimomura’s “Dark Matter Trilogy”. The game plays around with Kirby’s usual formula: sucking up enemies for their powers is still present, but now you can combine two different elements to create new combo powers of varying degrees of body horror. The game is a sidescrolling platformer, but it’s Kirby’s first use of 2.5D graphics, and instead of discovering new paths via doors, every level is a straight linear path. It’s a simple but deceptively challenging game that, combined with a boppin’ soundtrack, made many a childhood in a cartridge.

The story is such:
Dark Matter, the darkness-eyeball-of-evil from Dream Land 2 and 3, invades the peaceful fairy planet of Ripple Star. Its queen sends little fairy Ribbon into space with their crystal to protect it from Dark Matter, but it succeeds in breaking the crystal, scattering the shards across the galaxy. Luckily, Ribbon lands on Pop Star, where Kirby is more than ready to help her and to jump into another adventure. He must recover the crystal shards with his friends Waddle Dee, Adeleine, and King Dedede to put a stop to Dark Matter once and for all.

The LP:
I will be collecting all of the crystal shards, as well as showing off both endings. I won’t bother with the enemy cards, since they don’t actually amount to anything. It’s a short game, so this will only take 6 parts spread out over three weeks. Updates will be Tuesday and Friday.
Mugiwara Yoshi (Parts 1 and 2) and JigglyJacob join me as co-commentators. Neither of us played many Kirby games, but he found a way into each of our childhoods somehow.
The footage is recorded from a modded N64 that outputs an RGB signal through SCART, which bypasses the N64’s built-in blurring and can be upscaled to HD. It may not look as good or run as smoothly as a ROM, but at least all of the graphics are still there.

This game always felt really weird to me; like its a fever dream or something. I dunno how else to explain it.

The thing about Kirby games is that they are quite simple to just beat, but 100% completing them can be absurdly difficult. Sort of like how the games start out as adorable romps with your cute friends to find cake and then suddenly you’re fighting eldritch abominations from beyond the stars.

Sand is rocks. And aliens I guess?

We’ve found a water level/planet that doesn’t suck! 'Cause most of it isn’t underwater.

Yoshi had to sit this and Friday’s part out due to excess water of his own.

The world that gave my unskilled ass the most trouble.

Thanks for watching, folks. We might be doing the final two parts of Slime Rancher in this LP’s place while we work on Star Fox, but I probably won’t be doing another filler LP for now. Unless we still need more time, in which case, Diddy Kong Racing?