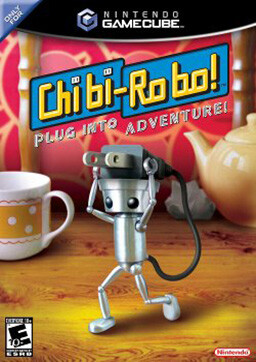 Chibi-Robo is an off-beat action adventure game series with a stronger-than-average focus on platforming. Released during the Gamecube’s dying breaths, Chibi-Robo: Plug Into Adventure! revolves around the titular housecleaning robot going about his daily tasks in the Sanderson household. But all is not well, as the house is plagued by problems both mundane and fantastic. Mr. and Mrs. Sanderson are both unemployed, their relationship is strained at best, and their daughter, Jenny, seems to be unable to stop pretending that she’s a frog.

As if that wasn’t enough, the toys in the Sanderson house come to life when no one is around, and each toy has their own emotional problems to fix. Have you ever wondered what would happen if a Roomba tried to be a pyschologist? No? Well, you can find out anyways in Chibi-Robo: Plug Into Adventure!

This game’s story isn’t particularly filled with twists and turns, but please refrain from discussing anything we haven’t seen yet.