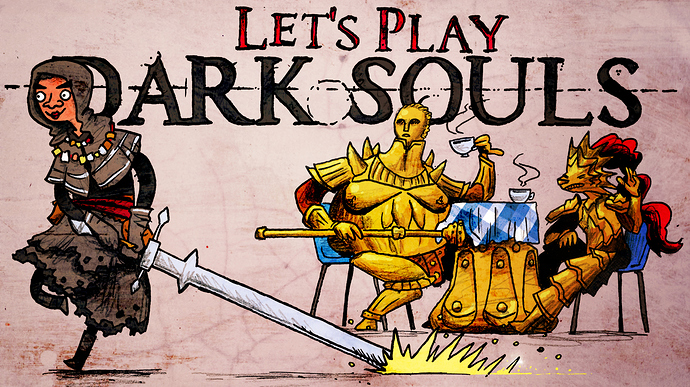 Okay but seriously, Dark Souls is an action RPG released in 2011 by From Software. A spiritual sequel to their hit PS3 exclusive Demon’s Souls, Dark Souls was originally released for the PS3 and Xbox 360, then later ported over to the PC. Just recently a remaster was released for the PS4, Xbox One, PC, and later on this year, the Nintendo Switch. We’ll be playing the PS4 remaster.

Dark Souls has a bit of a reputation for being a very difficult game, which… okay yeah, it’s really hard. However, with its difficulty comes a modicum of fairness to it all. Very rarely does the game reach “bullshit” levels of things that are completely down to luck and what the AI feels like doing. Usually, if you die, it’s your fault, and you learn from your death.

Dark Souls is more than pure difficulty though, which is what a lot of people in game development are only just now, 7 years later, beginning to understand. Dark Souls tells a deep and interesting story through its item descriptions, of which I’ll read and help people understand. Dark Souls also has some fantastic level design… and also some not so fantastic level design but usually it’s really good. Dark Souls is a great dark fantasy world inspired by Beserk (but theres way less sex involved).

How are you playing?
Poorly.

Offline. You can’t invade me, fuckers.

Also, my playstyle is mostly along the lines of “speak softly and carry a big stick”, so I’ll be using a giant ass sword, only using a shield to parry, and occasionally mix it up with some pyromancy along the way. I’ll also be going along the “intended” path, insofar as there is an intended path in Dark Souls, and avoiding any major skips.

Turn online on you coward.

I’ll play online once or twice to let people invade me, and to be summoned, but in specific areas.

Today we explore Firelink Shrine, our home away from home.