Dracula, coming in with the most dangerous of all curses: sending skeletons to kill you. 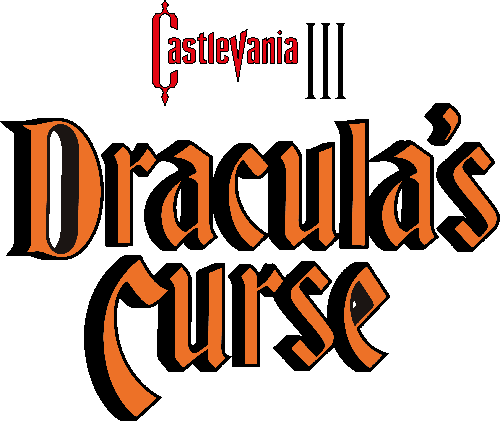 The year is 1476, and Dracula has resumed his war against humanity. With a powerful army of undead and demons bearing down on the country, Wallachia seems doomed. With nowhere else to turn to, the people decided to un-banish the Belmont clan, who had been exiled for their terrifying power. Their latest descendant, Trevor, must now fight his way to Dracula’s stronghold and take down the vampire before his campaign wipes out humanity. This time, however, our Belmont does not have to hunt alone. A number of other warriors are somewhere in the country, though they may not survive without a bit of help first.

Welcome to Castlevania 3! It’s the third game released in the series and the third on the timeline if not for the fact that they don’t include Castlevania Legends in the canon. Considering how poorly Castlevania 2 was received, it’s no surprise that Dracula’s Curse is better regarded, but it also helps that the game is impressively dynamic. If you’ve played the first Castlevania (or really any of the 2D platformers,) the base game should be familiar enough. But the inclusion of multiple routes and three other playable characters does quite a bit to make the game more interesting and replayable. More so than a day/night cycle and a time limit-based ending, at least.

Trevor has set off to save Wallachia, and what better way to do that than to go straight to Dracula’s Castle? Taking the direct route, Trevor must overcome the Clock Tower if he wishes to cross the bridge to Castlevania.

Grant is saved, but one path to Castlevania is now unusable. So it looks like we’ll be taking the long way around. Grant especially, since Trevor’s making a new friend today and Grant is taking the marsh route.

Part 4: All Dulla-hands on Deck

Grant has taken the land route, but it seems Sypha’s taking Trevor for a more direct approach: they’re just taking a boat to Castlevania. Of course, this ship isn’t exactly theirs, and there’s nobody in Wallachia who has a lake-worthy vessel ready for the duo. But there is a haunted ship they can… we’ll say “charter.”

Part 5: I Was Just Pretending to be Dracula

We return to Grant’s route, where he’s found a mysterious cave. Naturally, Dracula’s horde of demons has already nested inside. But it seems there may be someone else resting down in the depths of the earth…

Our hunters draw ever-closer to Castlevania! Trevor and Sypha, having taken a boat across the lake, arrive at the other tower leading towards Dracula’s domain. Meanwhile, Grant is just taking a nice walk… but has wound up in some flooded ruins, populated by more of Dracula’s army. Turns out it’s hard to avoid the army of the damned when it’s active.

Okay, second time’s the charm, right? Trevor and Sypha have reached the causeway leading to Castlevania. And surely unlike the bridge from the Clock Tower, this pathway won’t collapse. Dracula wouldn’t destroy both paths from his house, right?

Two of our heroes have made it into Castlevania! … kinda. Alucard has slipped in to the lowest catacombs beneath the castle, while it seems Grant’s path also led somewhere in the middle of the underground chambers. So today, we get to see how easy it is to sneak into Castlevania from below.

Trevor and Sypha have made it to the castle courtyard! And as expected, there are a lot of demons standing in their way of the front door. The good news, though, is that the army of the damned is a lot less threatening than blocks being dropped on your head. Sorry, Alucard.

The vampire hunters have, at last, made it to Castlevania. It’s technically a straight shot to the end, but the army of the damned isn’t going to make things easy. In fact, one of Dracula’s greatest generals is waiting right here at the entrance. Er, at the end of the entrance, anyway.

Death’s out of the running for this iteration of Castlevania, which means Trevor and Sypha are clear to climb one of the domain’s towers. But while Death might be dead, Dracula still has one more surprise before the vampire hunters can actually reach him.

The vampire hunters have reached the end of Castlevania. Once Dracula is dead, this night can end and Wallachia can be free. But there is a problem here: Dracula’s already died once, and he’s not too keen on doing that again. Can Trevor and Sypha overcome Dracula’s powerful magic and extremely weird body?

And there ya have it, another Castlevania’s complete! Happy Halloween!

@moderators , the thread can be put in completed LPs now.