That Looks Like a Homing Shot! - Let's Play Mega Man 3 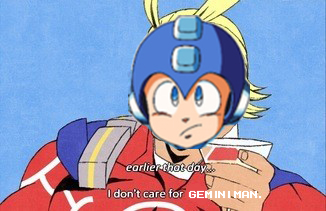 The Robot Masters have been defeated, but a new, mysterious group has appeared throughout the areas Mega Man has already visited. Mega Man must now retrace his steps and overcome new challenges in familiar zones in order to… I dunno, why are the Doc Robots even here? I don’t think the manual ever mentions them.

Two Doc Robots have been defeated, but there’s still plenty of work to be done. Mega Man returns to Shadow Man’s flaming sewers in order to face another two Doc Robots.

Mega Man is halfway done with his whirlwind tour of the first part of the game, but now he must deal with Doc Needle stage. And afterwards, he’ll need to scritch Rush’s ears for being a good boy.

Man, it’s really difficult coming up with descriptions for the Doc Robot stages.

Just want to chime in and say I’m enjoying the videos. I’m probably gonna start MM3 on the legacy collection sometime soon and your LP has been very informative, especially about weakness stuff.

Finally, the last Doc Robot sta- I mean, uh…
Mega Man is down to one final location. Though most of the Doc Robots have been defeated, two still remain. Can Mega Man put a stop to them? And even if he does, why are these Doc Robots even here in the first place? And what about that Break Man guy? What even happened to his plotline?

It’s time for Mega Man’s final showdown with Break Man! Then maybe we can finally see what Dr. Light and Dr. Wily were working on. I mean come on, we could have used a peacekeeping robot 12 episodes ago.

It’s the last stretch of Dr. Wily’s Castle, which of course means it’s time to re-fight the Robot Masters. And of course, Dr. Wily himself has probably altered Gamma, the peace-keeping robot he made with Dr. Light.

Unless it was made as a battle robot in the first place and Dr. Light somehow didn’t notice. Honestly that’s the kind of thing I come to expect from Thomas Light, if I’m being honest.

Before we go, here’s one last bonus video for the road. @moderators, this thread can be put in Completed LPs, but please keep it open for any further comments.

Thanks for the LP!

Thanks for the LP, man. I’ll definitely check you out when you do MM4.