Take A Look, It's In A Book: The Book Safe Thread

For a long time, I’ve had a fascination with book safes. A book safe, or a hollow book, is a concealment device that looks like, and may actually have once been, a book. It’s usually placed among other books to avoid attracting attention. My fascination might have started when it was famously used by Thomas Anderson in The Matrix, as he used a hollowed-out copy of Baudrillard’s “Simulacra and Simulation” to conceal apparently illicit computer programs. (I’ve never figured out what exactly those were for…)

One of the many websites I’ve looked at implores you not to use the book safe to store anything illegal, because it won’t fool police officers. The fact of the matter is… I’ve made dozens of book safes at this point, and I’ve never had anything to keep in them. My desire to make book safes is inversely proportional to my having anything at all to keep them in. I’ve given most of them away just to get them out of my house.

Let’s look at one that I made today: 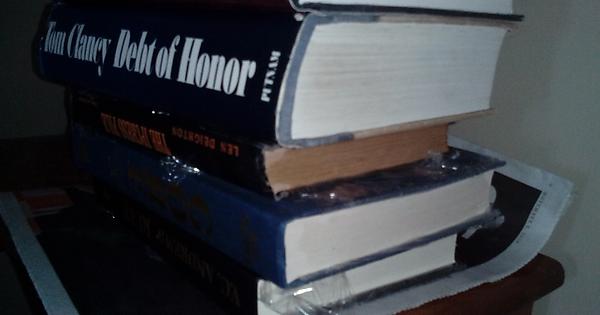 This is a stack of three books I glued the outside pages together with. I removed the dusk jackets and protected the covers with cling wrap. I one tried using painter’s tape. Don’t do that. It won’t protect the cover and it might rip it when you remove it.

You don’t HAVE to seal the outside edges. If you’re making a book safe of a paperback, sealing the edges of the pages will basically turn it into a brick, and nobody could possibly hold it and know there wasn’t something up. But sealing the pages like this makes it way easier to cut the pages later on without having to fold the pages up against the cover or whatever. That can warp the direction of the cut and make it crooked.

One set of tips said to cut the cover off the book and glue it back on when you’re done. This cover was peeling off anyway, so I decided to go for it. You need to be very careful cutting the cover off, though. If you cut through the cover doing this, it’ll be through the spine, which is not as thick as the regular cover. At that point, you might as well throw it away. I tried saving it once and… it was ugly. It’s probably one of the only ways you can completely screw up.

I use my handy metal ruler to draw guidelines on the front of the book. The wider margins are just the width of the ruler lined up to the edge, the wider lines are one half-inch from the edge. I decided to stick with the smaller width. The less paper you leave on the edge, the more likely you need to cement the outside edge. 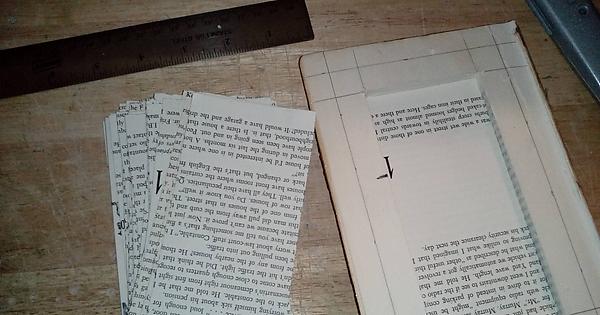 The trick is to be patient. You want to cut evenly across the line at an even pressure. If you get impatient like I do, you’ll try to push through tons of pages all at once, which will get you through the middle easier than the edges. This means there are uncut corners through the books that you have to clean up later, and that’ll make it harder as you go. A small book like this is easy enough. I did this in one sitting, but plenty of bigger books take a few. 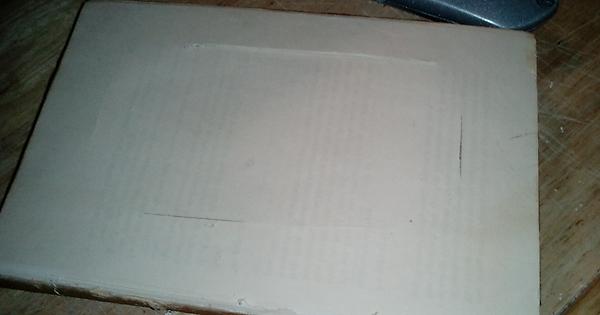 When you’re far enough down that you’ve pierced the back page, you can take the blade and cut through the back. There’s no reason to measure from here; just follow where your blade took you from the other side. I’ve tried measuring from the back and I’ve wound up with a weird staircase on the book where two slightly different measurements met up.

My cutting instrument, by the way, is a metal drywall cutter. I’d get something heavy-duty, but that might be why I’m inspired to push through it. Maybe the scalpel-like X-acto knife would be the better move, but I don’t have one of those. 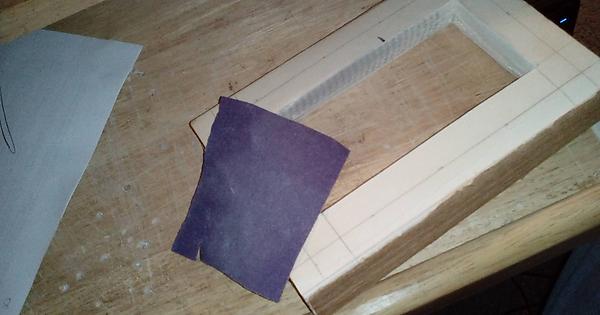 Once you have the frame, I rub it with some sandpaper. I have no idea what grit it is. I bought it ages ago. I’d do this part outside, because this will generate some nasty paper dust.

Speaking of outside, I used to bind the pages with a rubber cement/contact cement that I had on hand for gluing PVC together. If you’ve ever used rubber cement, you know that stuff stinks. I had to cure all my old books outside until the cement cured, sometimes posing them with the cover open so it could vent. It also meant I couldn’t do it in the rain or snow.

My very first attempt at a book safe was ruined at the end when I listened to someone saying to put Elmer’s Glue in between every page. That did NOT work, and the book warped from all the moisture. I threw that one away. A different one said to take Elmer’s Glue and dilute it in water, and… I wasn’t going to bother with that.

My coworker put me on the scent of Mod Podge, a puzzle glue. I tested one book with the leftovers from when my father glued together a jigsaw puzzle together (because apparently, people really do that). It worked wonders, and it dried much faster than the cement. I think I still have a can of the other cement, but I don’t see myself ever fussing with it ever again just to make a book safe. I’m currently using a sponge brush because it’s easier to wash out than a bristle brush. I’ve got a brush that has been rendered completely solid from the poor job I did rinsing it over several applications of the Mod Podge.

I glue the pages to the back cover and glue the spine back in place, and it’s done. Sometimes it’s necessary to rewrap the front cover in plastic to make sure it won’t close, but there was no glue exposed on top this time, so there was no need.

This is where the finished product should show up, but… I didn’t take a picture of it. And I already gave it away to one of the very few coworkers I haven’t yet managed to give one to.

Sorry. It was a former library edition of The Ipcress Files, the first spy novel of Len Deighton.

For me, it’s sort of an off-again, on-again obsession. I’m literally trying to run myself out of hardcover books so I can just get out of the game, but… then I’ll see a few one dollar hardcovers somewhere and get pulled back in.

So… does anyone else have the same fascination with book safes as I do? Anyone have any suggestions for techniques? What would you hide in a book safe if you had one?

A bit of a busy week for me, but I’ve made another book safe. 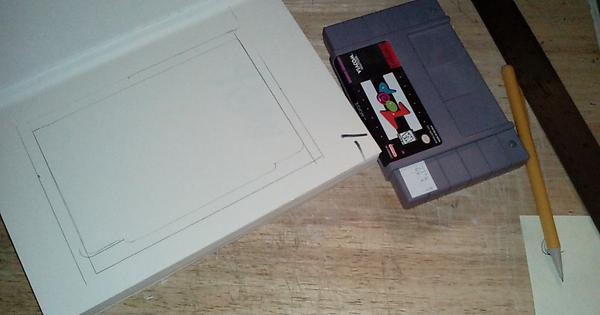 This is a copy of Ruby by “VC Andrews.” I traced the SNES cart onto the center of the book and gave it a quarter-inch allowance on each side. I might bump this up, as you’ll see later on.

Depending on the size of the book, I sometimes don’t bother cutting off the cover. I did glue the outside edges of the pages for this one, but you can just fold the covers back and keep them away, which will stop you from having to fold the pages back and make the edges drift too much.

This one really came out a bit rough. Sometimes, you just have to keep cutting away and smoothing out the edges a bit. I changed the blade partway through cutting this one, as my blade had gotten pretty dull. 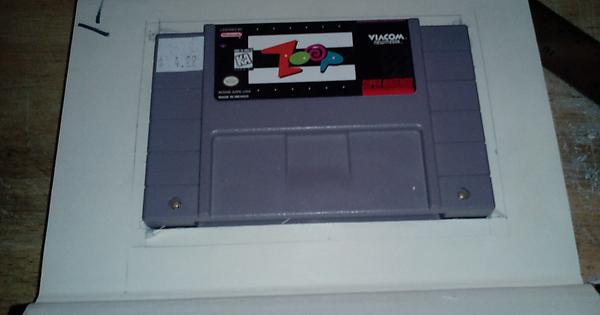 Whoops. Well, this is why I drew in the allowance. In theory, it SHOULD fit in the hole that perfectly fits it, but it might be hard to get out. I didn’t want to make the hole too big. I want the cart to fit as snugly inside as possible. So, I cut out one of the quarter inch allowances on the bottom of the book, the left-hand side of the cartridge. 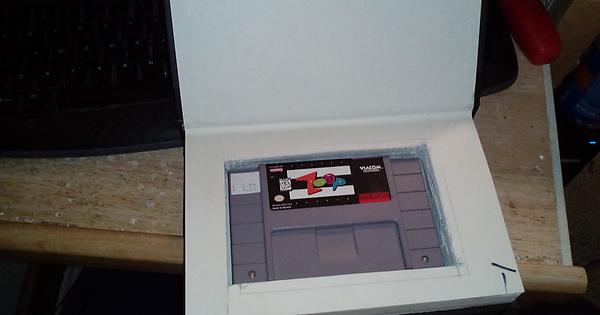 And now it fits. It rattles just a bit. I could have made it a little smaller, but hey. Now nobody knows I have a copy of Zoop.

This is actually the fourth video game book safe I’ve made. I was going to include the below pictures in the OP, but I couldn’t post more than ten pictures when I posted it. 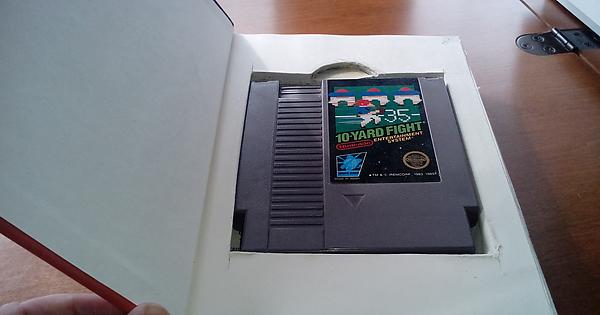 I made this exclusively because I thought there was a NES game called Rising Sun. Apparently, there isn’t one.

Both this and the last one have tabs cut out of the book to extract the cartridge. The SNES one is loose enough that I didn’t see the need, since you can just tip the cart out.

I got Dead or Alive from the woman who used to run a used bookstore, after I gave her a booksafe. I bought a copy of Dead or Alive Xtreme Beach Volleyball just for this safe. It’s actually surprising how little paper is on the edge, about a centimeter. This sort of booksafe, you MUST glue the outside, otherwise the paper will just break as you try to cut it. On the other hand, this one didn’t have to be bound permanently to the back cover, so the dust jacket could be removed at any time, if you wanted.

So… what should I hide in a book next?

So… what should I hide in a book next?

These are super neat. I’ve worked with some book safes on stage in the past, but I’ve never been the one to make them!

I think it would be cool to see something round, like a small clock. That aside, you could make a place to always hide the TV remote?

If you tell me the dimensions of your remote, I could make one for just that purpose.