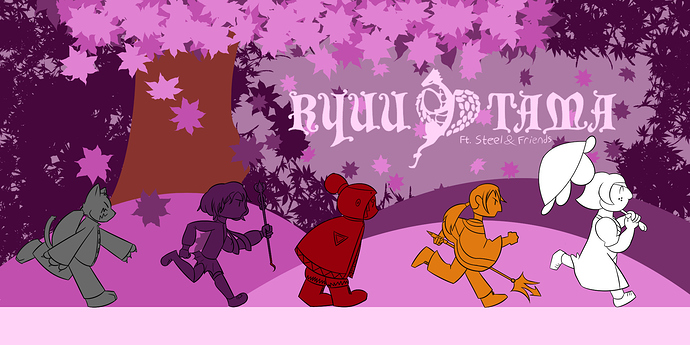 What the hell is Ryuutama?
Ryuutama is a Japanese Tabletop RPG created in 2007 by Atsuhiro Okada that was translated to English in 2015 thanks to a Kickstarter by Matt Sanchez and Andy Kitowski. The game itself is part of a genre in Japanese media specifically catered to “emotional healing,” which is just a fancy way of saying it’s a feelgood game. In the game, you don’t take the role of traditional heroes, but instead take roles normally associated with NPCs such as merchants, hunters, or craftsmen.

In Ryuutama, the GM assumes the role of a Ryuujin: draconic scribes that write down the stories of adventurers (aptly named"travelogues") to their respective seasonal dragon. Their goal is to nurture the dragon with travelogues so that it may one day leave the nest. There are four types of Ryuujin, each with their respective season and story style. Because of the variety and the lack of actual fluff within the game, groups are allowed a ton of versatility with the settings they create.

Who are you people?
We’re a group of friends that really love to shitpost and roleplay. No, really, that’s it.
steel-kun (henceforth “steel”) is our GM and the one assuming the role of the Ryuujin. It’s been a huge labor of love on his part to hold a Ryuutama campaign, and I would love to share my group’s shenanigans with you all.

Our group consists of 6 people (from left to right on the banner):
steel-kun - Eipollo, Our GM and Midori Ryuu
Me - Mako, a koneko goblin chef
PyroRaptor - Loveland, a magical boy healer
Broshimaru - Nishka, a merchant from a foreign land
BirdKingJay - Kaito, an adventuring hunter
KoriCongo - Sydney, a well-meaning noble

Wasn’t there a thread on this game already?
Indeed there was! In fact, the thread on here inspired me to host steel’s campaign here in order to gain more exposure for Ryuutama. Our group believes that Ryuutama needs more attention as a game and we wish to give it that by holding a thread here. We assure that our campaign will be different from the one already seen here.

Ok, so what’s the plan?
Every time we complete a session, this thread will be updated with the travelogues and journals of the cast as well as progress made on our map. Sadly, we can’t do a podcast format since steel is in Germany, meaning that our sessions typically hold during his late night hours. Our sessions and all forms of roleplay are all conducted through text, so transcripts of funny or serious moments might be given in tandem with the travelogues and journals. Archiving Roll20 logues is a bitch and a half to do though, so I must stress that it’s only a possibility.

What kind of house rules will you have?
steel will have a multitude of systems in place for the campaign. These include, but are not limited to:
-In-depth mechanics for each character and their respective abilities (Cooking, Magic, Tracking, etc.)
-Homebrewed monsters
-Magical items
-Collaborative worldbuilding

Our first session will be held this Wednesday. But first, a lore dump!

The following was written by steel. Each character introduction is written by their respective players.
It’s 1108 YR (the 1108th Year of Rebuilding)…
1108 years after the Great Demon King was defeated in battle and imprisoned in a powerful magical seal;
1108 years since his armies scattered across the land, and the long and arduous Season of Rebuilding began…

HISTORY
The Great Demon King and his armies had all but extinguished civilization on the island and sundered it in half, so that human’s rebuilding efforts had to start from close to zero. People in the present believe that civilization still hasn’t caught up to howl things looked before the Great Demon King arrived, and some people believe it might not be possible to return to these days at all.
Exploring the remnants of fallen kingdoms, adventurers find magical items and strange devices in ancient ruins, testaments to magical and technological genius no longer understood and no longer mastered. Some of these miracles of magic and craftsmanship are quite dangerous, but some are also beautiful memories of hope and times past but not gone.

THE DRAGONS
People remember that the Great Demon King’s advance was kept in check through the combined efforts of the Four Seasonal Dragons - divine beings that are believed to be timeless and powerful. The Seasonal Dragons rule the passing of time and the cycle of seasons, oversee the eternal renewal of nature, and entrust the fabled Ryuujin with an important task: the gathering of stories. The Ryuujin are dragons that can take the shape of humans, are attuned to one of the four seasons, and attend to the Seasonal Dragons presenting them with all sorts of stories gathered from mortals. Ryuujin take great interest in the stories of travellers, and many Ryuujin follow groups of travellers to share a brief glimpse of their curious, exciting, heartwarming and sometimes sad life stories. The Four Seasonal Dragons and the Ryuujin are not the only dragons, though - in the beginning of time, the Season Dragons created the Seven Dragons of Weather, the Thirteen Dragons of Earth, the 8 Dragons of the Sea and the 8 Dragons of the Skies. Though not an all too common sight, these Dragons of Nature live among the people and animals, protecting the untouched and beautiful places and the life that teems in them. Some of them can be quite overprotective, so it’s a good idea to be respectful and cautious around them, if one happens to encounter one!

FAITH
Since the fall of the Great Demon King, a spiritual rebirth has taken place in the hearts of people throughout the land: since the time of rebuilding, spiritual fulfilment has centered around appreciating the simple joys, experiencing nature and learning through this experience, forming and maintaining close bonds of friendship and respect in small, close-knit communities. Even nowadays, most can remember times of need, so that nothing is wasted and even the very little is appreciated. Help is freely offered to neighbours and strangers alike, but help is likewise expected from others.
People revere and cherish nature, the Seasonal Dragons and the Dragons of Nature, but there is little need for priests or temples. Important rituals are often enacted against the backdrop of an especially beautiful or scenic place in nature, though some of these can turn into shrines or natural monuments over time as people leave little gifts and sacrifices, add decorations to trees and rocks, even build platforms, shacks and other such structures to house icons or the like. One common sight are the so-called Ryuuzō Statues, shaped like dragons in monk robes, often found at difficult-to-reach places. It is custom to leave a hat, a scarf, a walking stick or something else on the Ryuuzō Statue, to be found and used by travellers in need.

EXPLORATION
Sure enough, the decline of civilization and the slow, cautious progress that has been made in rebuilding it has made people somewhat conservative and careful. Nature has reclaimed much of the ancient civilizations, and the dark thickets, deep caverns, torrid deserts and freezing mountain peaks are home to dangerous and powerful beasts. Some ruins have become home to monsters and are now known as “dungeons”, and a few remnant forces of the Great Demon King’s armies are rumoured to have crept and hidden into the darkest corners of the world, awaiting a moment their master might free himself from his imprisonment.
Dungeons in general are places that promise treasure and threat, and it is rumoured that some strange and powerful influence has given rise to beasts known as “Feral Opponent Entities” - extraordinarily powerful monsters that hone in on those who dawdle in their lairs…
But mankind’s nature is not so easily broken, and men and women of all ages, professions and origins share a common feeling of longing, yearning to see the world, and to find something that can help them make sense of their destiny. The Dragons look kindly upon these endeavours, and the Ryuujin have encouraged mankind to take up the Journey - a cherished tradition that allows everyone to travel, at least once in their lives, free of all responsibilities back home, and to find his or her own story and destination.

COMMERCE
Most places use ancient coins dating back to the time before the battles against the Great Demon King, found in sizeable amounts in ruins throughout the land; these coins are known as tama (₸), and some places even mint their own. But be careful: some places mint their own, different coins, and travellers might have to exchange their tamas for the local coinage in these countries. Some places might not even take coins at all!

PLACES OF LEGEND
The Castle of Gold - legends tell of an ancient castle built from gilded bricks, hidden somewhere in a nameless, dark and overgrown forest, and the
fabulous treasure it contains; there are different stories about how the castle came to contain such riches, and stories also disagree on the exact contents. Rumours include treasure troves of golden tama coins, jewels and gems, golden sculptures, and so on…but no minstrel or bard seems to know where this castle might be!

The Ceaseless Overgrowth - somewhere to the furthest south, it’s said, some powerful magic from distant times has created a thick belt of supernatural jungles, swamps and groves. This jungle is rumoured to produce a cornucopia of fruit, but the animating magicks that permeate the land like a thick mist are also said to make the trees themselves walk about, protecting their home from too-eager foragers…

The Kingdom of Flowers - on the island of Baigg to the east, rebuilding seems to have had a lot more success; the result is the fabled Kingdom of Flowers, a realm that claims to date back to the days before the Great Demon King’s armies ravaged civilization. It’s cities are home to artisans, poets and soldiers who serve the Orchid Queen, who leads her subjects efforts towards rediscovering and reestablishing lost knowledge.

And with that out of the way, an introduction to our lovely cast!

See you all after Wednesday

Session One has begun and…well… 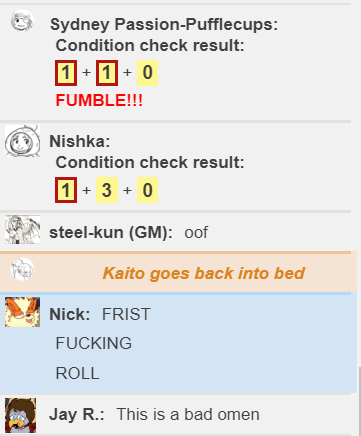 It’s gonna be a long journey.

Session One is completed. As such, here’s Mako’s travelogue. We have yet to actually meet Eipollo, so for now, he’ll just be thinking aloud:

And some highlights in no particular order:

To close, some more pictures! The first battle was your typical level 1 fair, especially considering Mako thuroughly deleted one of the cats from battle before it even started. That fumble from Kaito didn’t do him any favors however: 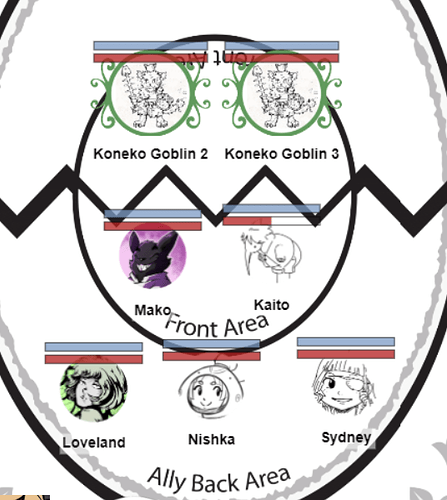 First battle.png537×600 184 KB
The battle gave us all enough XP to level up, though!
And lastly: Map progress 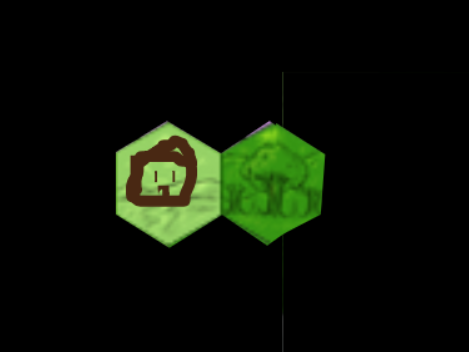 Yup. A whopping two (2) tiles unveiled. That’s a grassland and forest tile respectively featuring one of many doodles.

Session 2 will be next week. See you then!

Session 2 was two days ago, so I’m a tad late on this, but fuck it.

Mako’s travelogue, with some notes from Eipollo. He will be given the official duty of transcribing the blind man’s speech into travelogues from here on out.

<> <-----Stuff written in between these signs are notes from Eipollo

After we stayed at Eipollo’s and he flew the party back, we proceeded to get our objective, title drop included! 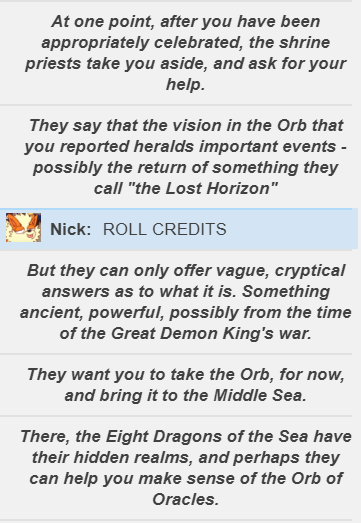 And to close, some art! 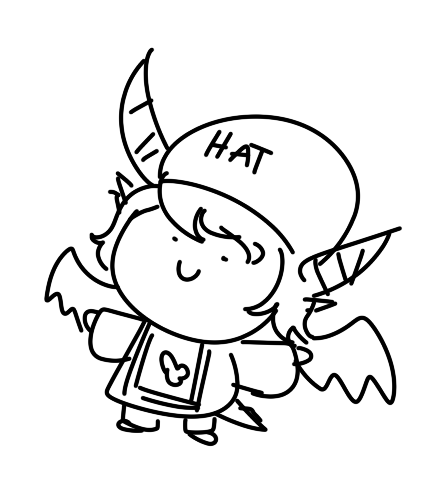