Probably my favorite series although I wish more people knew about it! It’s fun and has a very unique approach to portraying psychic powers by designing them as figures or any other sort of manifestation, aka “stands”. It definitely makes the action more engaging and I haven’t seen anything quite like it since.

But enough about Diesel. 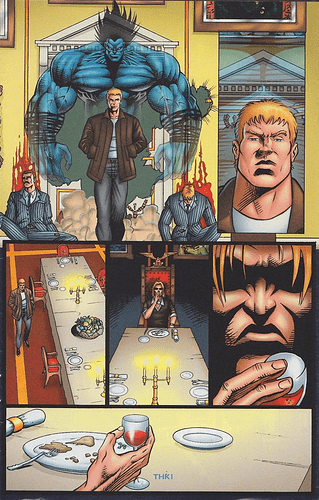 I figured a lot of us here seem to enjoy JJBA and it’s a big enough series that it could use it’s own separate topic instead of just being mentioned in the anime thread.

I think it should go without saying that we don’t post major spoilers without putting them behind spoiler blurs. I know people argue that with the comic having been around for the last 30 years we should all be caught up to part 8 by now but I still don’t think it’s really fair to newcomers. Some people would rather stick to the anime and that’s fine! Please don’t be elitist here. I feel the fandom gets enough of that and it feels like a big turn-off sometimes.

Why don’t we have a few questions to start us off, huh?

I saw the anime and how weird the art was for the manga and started watching Part 1. It was so wonderfully weird I kept watching. Finished watching part 4 last night.

"Invisible baby’s mother was never found so Joseph adopted her"
DID YOU GUYS EVEN ASK AROUND TOWN ABOUT A MISSING BABY!

"Invisible baby’s mother was never found so Joseph adopted her"
DID YOU GUYS EVEN ASK AROUND TOWN ABOUT A MISSING BABY!

I assumed she got exploded by Kira shortly before the episode began.

Joseph is best JoJo. I sincerely doubt this is even a controversial opinion.

All JoJo’s are good

Joseph is always fantastic, but after Part 4 I think I’d say Josuke is my favorite. My perfect crime boy has never done anything wrong.
I have a hard time choosing a favorite Stand just because most of them are pretty cool in some capacity. But Emperor always struck me for some reason, despite being fairly simple. Though realistically, Pearl Jam would be the best Stand to have, really. Giving your good-ass food the ability to cure your ailments? That’d rule.

Looks like there is going to be a special JOJO event on the 19th.

I’m sad because I’ll be missing that since I’m visiting Japan in March instead and I doubt anything else will be happening then besides Golden Blood. It’s like a little fan expo where you can buy tons of doujinshi and other fan-made content and I’m hopine i can make that at least.

I’m also hoping I can finish this collection here during my visit as well. Chara heroes are kinda ugly but they grew on me and you can find them for cheap in Japan vs like $50 for one of the D’arbys alone. I’m getting close to owning all the figurines for the part 3 guys.

I found out about JoJos last year.
Started part 4 and then went back so I could understand who was Jotaro and Joseph.

My favorite Jojo is either Part 4 Jotaro or Jolyne.

Favorite STAND is KIRA KWIIN, cuz… Well…she has no weakness!

Wish I could have more merchandise, until then I’ll keep listening to Great Days.

The fact that Santana has never and possibly may never appear again is a shame. So much potential for the last Piller Man to have his own Stand.

Santana is to JoJo what Raditz was to Dragonball: A new, unexpected threat that’s considerably more powerful than what has come previous, changes a whole bunch about what we knew of the setting and requires a great deal of effort and hardship (including teaming up with an enemy) to take down, but after his defeat is never mentioned again, except for his comrades to be all like “Pfft, who cares? We’re much stronger anyway.”

I’ve been reading JoJo long enough that I had to suffer through both Duwang and the deceptively bad Part 5 translation. So since around 2005, or thereabouts.

What a beautiful topic! chew 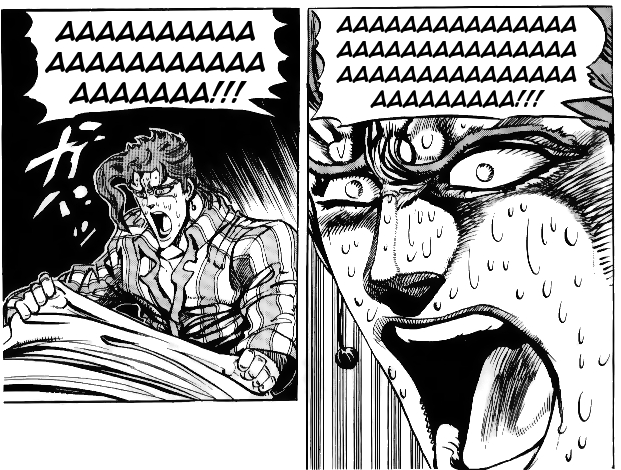 Right now I’ve been watching the Part 1-2 anime as it airs on Toonami (they just passed the part where Joseph killed ACDC and now has the brain thing on his back, and I’ve come to realize that Part 1 really isn’t all that hot, aside from a few good moments. It might have been a cool thing back in the day but I just felt like I wanted to get through it to get to Battle Tendency and thankfully it lasts only 9 episodes. But oh man, when it hit Part 2 I was just

Also, the OP is fantastic and pretty much the whole soundtrack rules. I wish the off vocal versions of some of the tracks like “Overdrive” were on the OST because while I don’t mind the vocals the instrumental parts are so awesome and I’d love to hear more of that.

So, I powered through the rest of Stone Ocean over the weekend and…wow. It’s hard to believe that JoJo could get any weirder after the ending for Part 6.

On that note, is Steel Ball Run/JoJolion set in an entirely separate universe, or do we know if (PART 6 SPOILERS) it’s set in the same universe created by Made In Heaven accelerating time to the point of restarting the universe?I mean, nearly everything about the new Made In Heaven universe was different except for the appearances of the protagonists and Emporio somewhat remembering the past couple universes.

On that note, is Steel Ball Run/JoJolion set in an entirely separate universe, or do we know if (PART 6 SPOILERS) it’s set in the same universe created by Made In Heaven accelerating time to the point of restarting the universe?I mean, nearly everything about the new Made In Heaven universe was different except for the appearances of the protagonists and Emporio somewhat remembering the past couple universes.

SBR and JJL are set in a completely unrelated universe that just happens to feature vague parallels to the one we’ve followed from 1-6. So basically parts 7 and 8 =/= the universe that part 6 ended on meaning that, as fun as that’d be to see her in Jojolion, Irene does not exist.

I thought as much, but wasn’t completely sure. Thanks!

I feel like part 8 is really underappreciated. It’s basically the world’s most fucked up family sitcom.

So I’ve been watching the dub for Battle Tendancy on Toonami and it’s actually pretty good.

But when I heard Kars’ voice for the first time, I could not stop laughing because he sounds very similar to BirdPerson from Rick & Morty which is absolutely perfect omg.

I am now picturing Jojolion set to Seinfeld’s soundtrack, and it’s fantastic.