Retro Rank Rhapsody: It's like a Sampler Platter but with old games instead of cheese sticks

I owe playing two games to some of my most dedicated supporters so I’m going to give them the Retro Rank Rhapsody treatment. Soul of the Samurai is a 3D brawler with some RPG elements while Jersey Devil is a 3D platformer as well as a terrible, no good, very bad game.

Retro Rank Rhapsody? What’s this about?

I’ve always had a fondness for the older eras of gaming and games that have been made to emulate those eras. I also have a fondness for showing off more obscure games that not a whole lot of people know about. This project is a mashup of those two loves combined with my previous project, Ranking of Shmups. Ranking of Shmups was a project to take a look at a genre of games that I love while also seeing which of those games stood the test of time. From what I’ve learned over doing that for a year, I was able to refine the concept into this, which is basically like an LP version of one of those sampler platter things that restaurants sometimes have.

So is this just about making a Top X list of games?

Not necessarily. The ranking part of this project is a big component, but it’s not the only thing. This series is also a chance to take a look and celebrate games that people might not have ever heard of or commend aspects of games that might not be looked at in as much detail. I will also be looking at grading other concepts from the game such as craftsmanship or world-building as well as noting elements of the game that people might want to know about the game such as difficulty or if there is anything that might put off a person from playing it.

And you are keeping track of this somewhere?

Is there a specific thing you are looking for when ranking games?

Well, not exactly. I would say that “perceived quality” is my general stick for ranking, but the question I generally ask when ranking a game is “Would I enjoy playing X over Y?” I will occasionally use other metrics to help with ranking like if I can tell a game was designed to pander to a specific audience, it’s likely going to go lower on the list than if it did not have those elements.

So this list is basically fueled by your own tastes?

I mean, any list like this is going to have the author’s influence onto it, but trying to divorce my own tastes from a game’s ranking is why I like to have multiple people around when I record these. I try to make sure that mine is not the only voice that motivates a game’s ranking and I’m perfectly fine with being outvoted. I want this to be helpful for other people more than it being a reflection of me.

Wow, this game is low on the list. That means it must be bad right?

Wrong. The way that I look at it is that if a game is ranked low, it means that it is less likely to be enjoyable than a game that is ranked higher. During Ranking of Shmups, older games such as Galaga or Xevious were ranked considerably lower than other games even though they aren’t bad games, just old. I put in an Age rating per game to help highlight that even though a game is ranked low, it’s age might have caused it to be ranked lower due to simplicity of games of the era or something like that.

So what other ratings do you have other than just the game’s rank?

Isn’t it a bit confusing to compare games when ranking that have very little to do to each other?

Yes, that’s why rather than just have one big list, I have several lists. Originally, I was planning on doing lists based on genres, but then I realized that that could get very complicated very quickly. I then had the idea to divide the lists by gameplay ideas named after stats and other terms related to RPGs. The lists are as follows

A more detailed explanation of what’s captured in each list can be found at the list itself under the “Category Guide” tab.

How much of a game do you need to play in order to rank it?

I don’t play through every game I rank to its entirety, but I do play enough to show of a good majority of its content. I do make sure to do the research on a game beforehand to make sure I can tall when I’ve shown of most of what a game has to offer. If a game is short enough, I do usually show off 1 or 2 games in its entirety per stream.

What is your definition of “Retro”?

Bascially a game must fit one of these criteria:

The game must have either…

How is each episode recorded?

I record the footage for each episode from a stream archive. They are more prepared than “Oh hey, I’m just going to pop this game on and dick around with it” as I plan each episode weeks in advance. The live nature of a stream also provides a more accurate experience of playing a game as I will repeatedly fail at things and it won’t be a perfect run. Also, my chat does sometimes bring up details that I might forget and there shouldn’t be that many distracting elements.

If you do want to watch the footage of each episode be recorded live, you can go to my Twitch page at twitch.tv/lolodepuzlo. My current recording schedule is:

Is there an easy way I can keep up to date with when you go live if for some reason I can’t access this site?

Yes! There are two easy ways.

Here is the series of streams that I did that spawned this series.

Alright time to descend down the rabbit hole

Here are the thumbnails for the next two episodes to give an idea what would be covered. 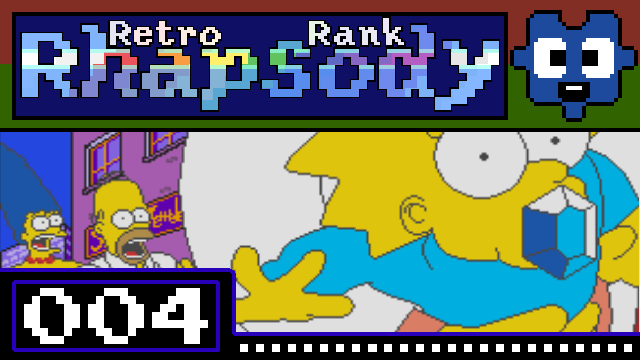 Episode 3 is now up!

I’ve also added descriptions of the next two episodes.
May 18, 2018 9PM EST
Rhapsody In New (Part III)
It’s time to get into the more specialized lists as we put the first entries into the INT and CHR lists. In this episode we will hone our math skills IN SPACE as well as our artistic abilities and then experience the real nature of Puyo popping and then fight awkwardly in the streets of the world.

May 19, 2018 3PM EST
ANIMEPUNCHERの伝説
Last time we looked at Western-style cartoons and comics so let’s look at Japanese ones next! In this episode, we will be fighting evil by moonlight, making people explode with a single punch, unite the Three Kingdoms, and then maybe it might be time for some morphing?

Turns out I made a phrasing error so I’ll need to fix that. In the mean time I’ll leave it up.

Just to give a teaser for the next two episodes. 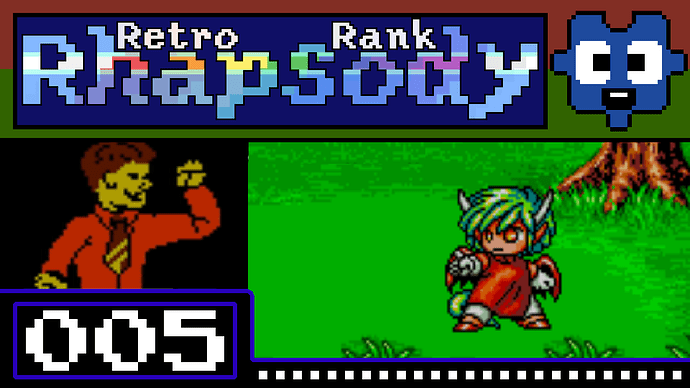 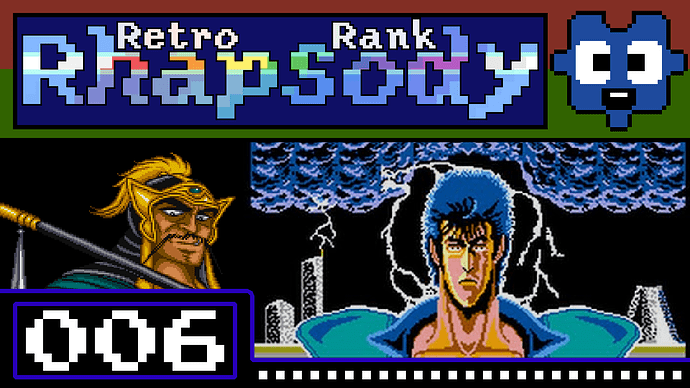 
It’s time to get into the more specialized lists as we put the first entries into the INT and CHR lists. In this episode we will hone our math skills IN SPACE as well as our artistic abilities and then experience the real nature of Puyo popping and then fight awkwardly in the streets of the world.
LoloDePuzlo May 22, 2018, 11:48am #8

Episode 6 is now up!

Last time we looked at Western-style cartoons and comics so let’s look at Japanese ones next! In this episode, we will be fighting evil by moonlight, making people explode with a single punch, unite the Three Kingdoms, and then maybe it might be time for some morphing?

Episode 7 - Rhapsody In New (Part IV) has been uploaded!

In the last episode focusing on the short-form lists, we look at digital board/card games as well as fan games/ROM hacks. In this episode, we’ll be hitting the casino, avoid going directly to jail, return to Gensokyo, and see what’s up with this apparent Curse of the Moon?

Episode 8 - A Mental Sucker Punch has also been uploaded!

In our last episode focusing on brawlers, let’s take a look at some of the more bizarre brawlers out there. We’ll slug it out as literal batmen, deal with irregular time flow and dreams of a megalomania, get revenge on various girl biker gangs, and then try and stop the destruction of the world with the help of a pink ostrich and some alien plant thing

If we are going to look at Action-Adventure style games, we might as well start with the big one. Join us as we look through the first entry in the Legend of Zelda series in which we bumble our way through Hyrule while yelling at cats to death.

Episode 10 - A Night At The Namco Museum

Let’s return to the Namco Museums to take a look at all they have to offer rather than just shmups. We will be looking at the Playstation Vols 1 and 2 which focus on Namco classics such as Pac-Man, Mappy, and Pole Position, as well as fun and more obscure titles.

Episode 11 - A Norfair and Brinstarry Night for Tourian Zebes

To christen the Delve list, let’s take a look at one of the first games to blend the action-platformer with the dungeon crawler, Metroid! Although it’ll be more action-platformer than dungeon-crawler considering that for some reason our hero can’t crawl…

Episode 12 - Eating Your Way To Victory

A new month means a new theme! This month’s theme is Food Adventures so let’s look at some games featuring adventures where food is necessary to survival! Let’s get involved in a good old fashioned Food Fight, help some pink puff save his home, and then go on a healthy diet of numbers, words, and problematic messages

Let’s break in the Experience list by taking a look at one of the original Western-style adventure games, King’s Quest! We’ll be going back to 1983 PC game standard so expect lots of stupid deaths, fumbling with text parsers, and trying to figure out questionably designed puzzles.That is if we can cross the damned bridge to the castle.

After looking at King’s Quest, let’s continue our month theme of Food Adventures by looking at a Japanese-style Visual Novel, Princess Tomato in the Salad Kingdom. In this charming game we will be trying to save sentient vegetables from being eaten by the evil Farmies providing that our companion stops dropping all our stuff…

In this final episode of building the lists, we look at the final list, Planning, and what better way to christen the Planning list than by looking at the definitive city-planning game, SimCity! So let’s start our city and hope for the best against poor city-planning, budget cutbacks and…Bowser!?

We’ve taken a look at games where we play with food, now it’s time to play games where the food goes after us! In this episode we will be playing as sentient tomatoes, be chased by deadly burger condiments, and finally save Princess Tomato and the Salad Kingdom.

Shmup ranking is not dead as this episode is dedicated to taking a look at some games that are sequels to games found in the Ranking of Shmups list. This episode will be jam-packed with thunder, dragons, bug princesses, and thinking of a different definition of shooting bullets.

For our last food adventure, we take the initiative ourselves to get our food by looking at games based on hunting or fishing. Whether it be duck, bass, marlin, or buffalo on the Great Plains, this episode will have us hunting for it…

We start Vacation month by going to the most magical place on Earth, Disney World! Let’s take a look at a couple games that actually feature the park (or regional offshoots), as well as a few others featuring various Disney properties (though mostly the big mouse himself)