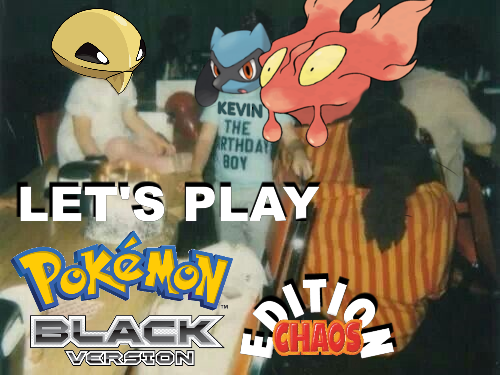 Hi I’m [INCONSISTENT USER NAME ON ALL ACCOUNTS] and me n’ my friend are paly Pokemon. Originally posted in the romhackeria thread on Something Awful, I had 4 episodes ready at the time of its closure so it’s here now too. I promise it’s not a youtube dump.

Chaos Edition?
This is Pokemon Black version run through the Universal Pokemon Randomizer with most of the boxes ticked.

Does this count as a romhack?
It’s a modification of the code of a video game rom, so yeah.

So what boxes did you tick?
-Base Stats are completely randomized, though they will fall under the original Base Stat Total (BST).
-EXP curve is normalized so everything will level up at the same rate.
-Stat Randomization ordering will follow the evolutionary line.
-BSTs will be changed to the updated totals from future games in the series, so things like Pidgeot and Beedrill will have a few more points to work with.
-Pokemon will evolve into ANYTHING as long as they share a type, and will more than likely evolve into something of a similar strength to what they would normally evolve into in an unmodified game.
-Also the types of Pokemon and all moves are changed. Type effectiveness remains the same as the base game.
-Pokemon Abilities are randomized. Wonder Guard will appear. Arena Trap, Shadow Tag, Magnet Pull, Truant, Slow Start, and Defeatist will not.
-Starters will all be randomized, as long as they can evolve 2 more times.
-Static Field Pokemon are randomized (Legendary Pokemon will always be a random Legendary Pokemon, Non-legendaries will always be non-legendary)
-Trades are completely random
-Moves, on top of having new typing, will also have random Power, Accuracy, PP, and damage type Category (Physical/Special)
-Movesets are randomized completely as well, with weaker moves generally being learned first.
-All Pokemon start with 4 Moves.
-Trainers have random Pokemon with type-themed teams.
-life is a hell we can never escape without losing everything
-Trainers will have different names and class names, and will always have Fully Evolved Pokemon after level 45.
-Every Pokemon on a route will be replaced with a new Pokemon, and will repeat infrequently in the hopes that duplicates on routes will be uncommon.
-No legendaries will appear in the wild outside of normal event locations.
-All Wild Pokemon have their held item tables randomized.
-All TMs and their compatibility will are randomized. All HMs can be learned by everything so that we can’t get stuck.
-All Items on the overworld are randomized entirely.
-FASTEST TEXT SPEED IN THE WEST, WHICH BREAKS SOME DIALOGUE BOXES HELL YEAH LET’S GO

Reserved post for something after the next recording session when the audio quality improves.

Also let me know if I should ditch the intro. I liked it but it seems like that’s not popular opinion.