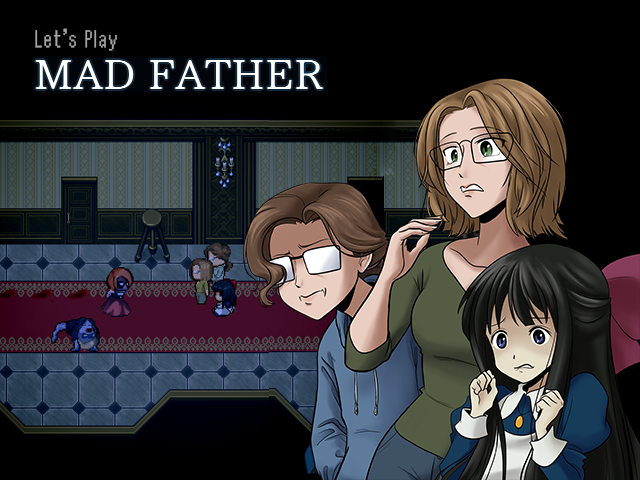 “Even at a young age, I knew what my father was doing. So I pretended that I wasn’t looking. That I didn’t know or hear anything. I feigned ignorance the entire time. Because I loved father”

Mad Father, originally released in 2012, is a survivor horror game created by Japanese developer Sen. We play 11-year old Aya Drevis, who wakes up one night to find a horrifying curse has been placed on her family. Aya chooses to face the curse head on for the chance at rescuing her father who is being targeted by angry spirits.

Mad Father was originally published by Miscreant’s Room, however we are playing the Steam version which was published by AGM Playism in September 2016.

Genghis Kait and I really enjoy the horror game genre, survival horror especially, so we wanted to take a look at this little indie game! Genghis is taking the controls on this one while I am around for the ride to provide semi-blind commentary (Semi-blind as in I’ve seen this game before but it’s been many years since then and I’ve forgotten a good chunk of it). This LP will be 5 parts, 1 of those parts being bonus footage/alternate endings.

Note 1: We had an issue with the program used to capture the game footage, you’ll be able to notice a fraps counter flickering on every so often. Attempts to remove this were unsuccessful. Please accept our apologies, we hope that it’s not too distracting for everyone.

Note 2: This thread is being marked with

because of its depictions of gore and other mature themes such as torture and mutilation. Please note that these themes will be present throughout every episode of the LP.

I’ve always had a soft spot for RPG maker horror games. What they lack in gameplay they usually more than make up with interesting story.
I don’t know if you’re familiar with Ib, but that’s a really good one.

Also if you explained it in the video I didn’t catch it, but what are the ravens? Save points?

I really like Ib! I do wish that the sprite work was a bit better in that one though. Part of me hopes for a ‘remastered’ version of the game to come out at some point that adds a bit more polish to the backgrounds and sprites (Mostly the backgrounds). Though I say that and I feel like I can’t complain too much, these are indie games after all! It’s hard to hold the graphics against the game knowing given that these aren’t big studio releases with a huge team of people working on the game.

And yep the ravens are our save points! If I remember correctly a later video will show off the save screen a bit, but I don’t recall if we specifically call out how we’ve been saving (It’s more of a “Make sure you save here!” moment).

I wish you didn’t rush through the game so quickly, a bit more time to read and some more explanation would have been nice. It seems like a very interesting little game.

That’s my bad! I tend to read pretty quickly so I don’t always give enough reading space, that’s good feedback for the future

thanks for checking it out!

Oh man, this game, it’s pseudo-sequel Misao, and Witches House were the first rpg maker horror games I got into. Really nostalgic!

I’ve always had a soft spot for RPG maker horror games. What they lack in gameplay they usually more than make up with interesting story.

I don’t have the patience to play them, but probably the LPs I watch the most are random RPG Maker horror games. There are a lot of good ideas and themes among them.

That’s my bad! I tend to read pretty quickly so I don’t always give enough reading space, that’s good feedback for the future

thanks for checking it out!

Yeah, a good rule of thumb is to leave text on screen long enough for you to read it out loud twice.

Hey everyone, part 2 is up!

Thanks to everyone who’s checked this one out so far! Apologies again for the issues with this one regarding the fast text. We’re hoping everyone can still get some entertainment out of this LP as we had a lot of fun recording it. For our next one we’re definitely going to keep an eye on the text speed and make sure to slow it down for everyone!

Coming at you today, here’s part 3! We have one more part to go before we finish the main run of the game! I love that the game tries to explain this ludicrously huge basement as “Oh yeah, it used to be a cult compound or something.”

Yeah that line seems very thrown in last minute to try and excuse some of the odd rooms we encountered.

I didn’t really get into it in this LP because I’ve talked about it previously when @GenghisKait and I covered other games, but I really dislike when video games have weird architectural choices when there’s little to no reason for it in the game. Things like the room where We have to cut off the dolls head to make the dual rooms match. Why was this room made this way? For what purpose?

It’s especially bad when it’s a setting like in Mad Father where it’s a residence where people are living and would be running into these puzzles regularly. Do you have to deassemble/reassemble a sliding block puzzle to flush the toilet?

I wonder what the plot of ‘Kind Father’ would be. Our dad secretes himself away in his workshop every night, and as the game progresses we learn that he’s actually Santa Claus?

I feel maybe it would help if there was, like, a journal entry somewhere talking more about the origin of the house. It could say something about how the basement used to be used as a vetting course for new members, with trials set up to purify the spirit or some such.
And your dad never removed the puzzles because, I dunno, the house is a historical landmark. Or he’s lazy.

I wonder what the plot of ‘Kind Father’ would be. Our dad secretes himself away in his workshop every night, and as the game progresses we learn that he’s actually Santa Claus?

Little Aya Claus wakes up one night to find that the all the ghosts of Christmas past, present, and future have taken over the house and kidnapped her father. Can she make her way through the festive undead and survive this not-so-silent night with her life intact?

At the very least, they could have thrown in some handwave about how the curse is messing with the house because something something angry magic something.

And your dad never removed the puzzles because, I dunno, the house is a historical landmark. Or he’s lazy.

Yeah, or maybe Dad appropriates the cults trials for his own experiments? Something akin to the human experiments that went on during WWII would fit in with the whole ‘Mad Doctor’ thing he’s got going on.

At the very least, they could have thrown in some handwave about how the curse is messing with the house because something something angry magic something

Well and it’s especially weird because they kind of do have magic messing with the house in addition to the cult thing. At least I assume that the cult members didn’t set up that room where we have to recreate our Dad’s memories. So it’s partially magic, partially cult members?

Here’s part 4! This concludes the main run of the LP, stick around next week for some bonus footage!

I too focused on momboobs. Bad character design decisions unfortunately made it kind of impossible not to after all.

It doesn’t help that in that scene Aya is reaching out for her mom’s goods, I mean her mom.

I mean I guess I can see where Aya was coming from with the whole “I’m gonna repeat my father’s mistakes” thing. It wasn’t any of the numerous vengeful ghosts that killed her father in the end, but rather many knives. As long as she keeps any of those out of Maria’s hands, she’ll probably be fine.

I feel like it, uh, kinda takes the wind out of the climactic mom confrontation when it goes:

[spoiler]Mom: "I must avenge the many innocents your father has-"
Aya: "You’re just jealous of dad’s hot girlfriend, aren’t you."
Mom: “lol, you got me.”

I mean, later we found out it was actually because she’s trying to foil your dad’s doll schemes, but in the moment it was really goofy.[/spoiler]