Operation P.U.G. and the P.U.G.Cast: Cartoons and Video Games

Hello, I’m scumm_boy, and I am 1/3rd of Operation Pug We are three friends that play lots of video games and that has led us to branch out into several creative endeavors:

We took our backgrounds of playing lots of games since childhood and the humor we have found therein, and started on a entirely self-made cartoon project. The titular Operation P.U.G. from which we are named has had it’s pilot episode released over the holidays last year, and it has been a labor of love for 2+ years. We are now working on the 2nd episode, with no end in sight!

Here is the pilot episode, for your enjoyment:

Since the cartoon takes so long to produce, we needed something to put out under the Operation P.U.G. banner that would update more frequently and also fulfill our dreams of being Dr. Johnny Fever from WKRP In Cincinnati. The P.U.G. Cast was the answer, and we’ve put out 30 episodes since we started in September 2015. It is available in audio format through most podcast apps as well as on Google Play Music and iTunes and recently we added a video component on youtube, if that’s your thing!

Our most recent episode:

Much more recently we have started doing streams of games we are (re)playing, which go out on pretty much every streaming service thanks to restream.io. These are all archived on our youtube channel after the fact.

We appreciate any feedback on any of our content, and hope you all enjoy!

Our newest PUGCast is out! We talk about the hottest game news like… console beta OSes! And games! Come, join the fun! 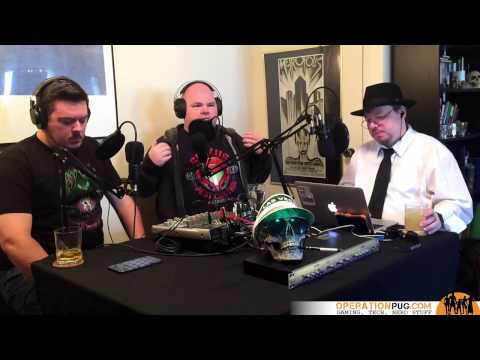 The daywalkers gather in the apocalyptic wasteland and bring you… – Intro, tshirt check (0:00) News – Nintendo subscription service will be ~$25USD/year. So that’s… something? (5:40) – Zenimax wins $500 mil settlement in copyright/NDA case from...