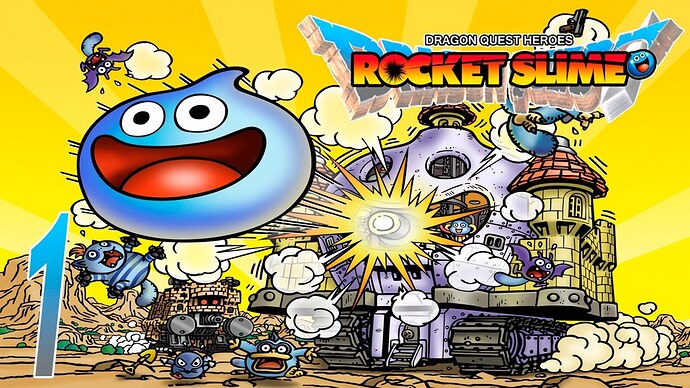 Ah, Dragon Quest. The silver medal of JRPGs, as far as the West is concerned. Yes, despite it’s overwhelming popularity in Japan, Dragon Quest has remained firmly behind Final Fantasy in America. But despite it’s lesser star status, the franchise still has the occasional spin-off that reaches our shores.

And the spin-off we’re playing today (which irritatingly shares its name with another DQ spin-off) is Dragon Quest Heroes: Rocket Slime! Rocket Slime is a series of Action-Adventure games. Despite being a trilogy, we only got the second game in America. The first game is decently fun, but it’s the second game that added a mechanic that really helped the game stand out, and I am shocked that there has not been a spiritual successor with similar gameplay.

The story is simple. We play as Missile (default name Rocket), who is on a quest to rescue all 100 slimes of Boingburg after they have been kidnapped by the Plob! Join us as we guide Missile through his journey fraught with enemies, traps, and worst of all, puns!

After a brief tutorial for the elasto blast, it’s time to set out on our adventure! Our first stop is Forewood Forest!

It’s a new day in Boingburg! Missile sets out to a new area to investigate the Tomb of Tootenshcleimen and unlock a new gameplay mechanic that’s probably the best thing about this game!