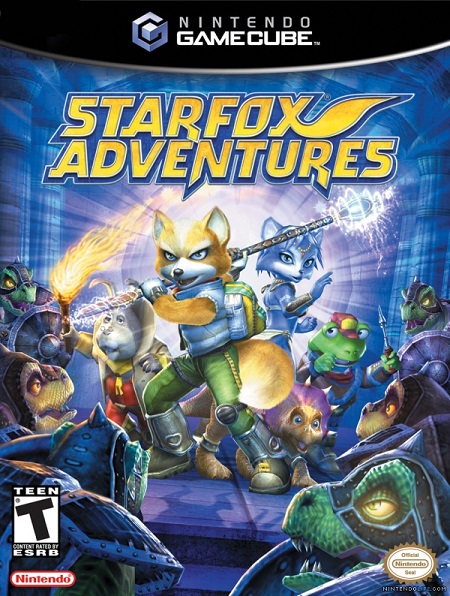 The game
Nintendo’s Star Fox was a popular space shooter series with animal people, albeit with only two formally-released entries, by the time 2002 rolled around. Rare were a popular game developer who made many acclaimed and varied games with animal people for Nintendo by then, including Donkey Kong Country, Banjo-Kazooie, and Conker’s Bad Fur Day. It seemed like a no-brainer that Rare developing a Star Fox game would make for something special. But that’s not what happened.
For at least 5 years before then, Rare were instead developing their own IP: Dinosaur Planet, which would be their last hurrah with Nintendo due to the two companies slowly falling out. A Zelda-esque Action-Adventure game originally planned for the Nintendo 64, it would star two anthropomorphic fox characters: Sabre and Krystal. Nintendo’s Shigeru Miyamoto saw the game in-development, noticed that Sabre looked like Fox McCloud from Star Fox, and suggested they retool the game to be a new entry in the Star Fox franchise.
After more development time, with Sabre being replaced with Fox and Krystal being replaced with a sexy lamp, Star Fox Adventures released at last in 2002 on the Gamecube to a resounding “…Oh. Okay.”

While it’s not a bad game and has plenty of fans and defenders, Adventures ended up a not-particularly-inspired Zelda clone that suffers from tedious gameplay, obnoxious characterization, and an absence of Falco. Rare would leave Nintendo and never reach their greatest heights again, Star Fox would sporadically saunter on and never reach its heights again, and Krystal would continue to exist only in relation to Fox until she was a casualty of the reboot bomb.

But how bad can Adventures be? Let’s find out! FOOD!

The story is such:
Star Fox, the legendary space mercenaries, have been sitting on their asses without work since defeating Andross 8 years ago. At last, General Pepper gives them the job of saving Dinosaur Planet, literally just a planet inhabited by dinosaurs, that has broken into pieces which threaten the rest of the Lylat System. Fox must fly down to the planet’s surface, recover the SpellStones that will bring the planet back together, and put up with a tiny triceratops that starts following him around.
But what about the whole 20 minutes you spend as Krystal in the beginning? She gets locked up and literally doesn’t matter for the rest of the game except for the parts where Fox gets hot for her, I guess. A shockingly shit fate for the girl who was once the hero of the game.

The LP:
Mugiwara Yoshi takes the lead for a straightforward playthrough with no plans for completionism. He is a Star Fox fan who played the game only once ever. He will occasionally go into detail on ways the game was changed from Dinosaur Planet, but the focus is on Adventures as-is.
Myself (ThornBrain) and JigglyJacob join him as co-commentators - I also grew up a Star Fox fan and only played the game once ever; Jacob only recently discovered Star Fox and loves 64 and Assault.
Updates are every Friday.
See also: our Star Fox 64 LP, played by me as the start of our channel’s Star Fox LP series. Probably necessary viewing for when we start talking about Falco.

I really shouldn’t be surprised that someone made a translator for this.

Probably not a good thing in the long run for your LP to peak in part 2, but here we are.

It might be faster to starve them to death.

This and last week’s part were recorded when my Spring allergies were at their worst, and this is the point where I got especially surly. I apologized to Yoshi for it afterward, but I think my lack of patience with everything turned out funnier than meaner.

Fox finally gets to the Krazoa Palace. Let’s see where everything goes wrong!

Good, more reasons Tricky sucks. Luckily that means we drop him partway through.

I recorded an update for our channel on current and upcoming LPs, so I’ll share it here since it’s relevant. Enjoy my bed hair.

Pong can eat it.

The LP will be on a hiatus until Yoshi’s able to record more, which should hopefully not be too far off in the future.

We return for only four more parts before the LP is complete!
Out of the Lightfoots and into the Rexes.

The Trials and Tribulations of Tricky

It’s the penultimate part of the game, so we need to condense all of its bad design decisions into our last schlep to a spellstone.

The game ends with a bang, but not one anyone wanted or is particularly satisfying.

Thanks everyone for watching. Hang on to that sexy saxophone for our next Star Fox LP: Star Fox Assault, coming early 2020!