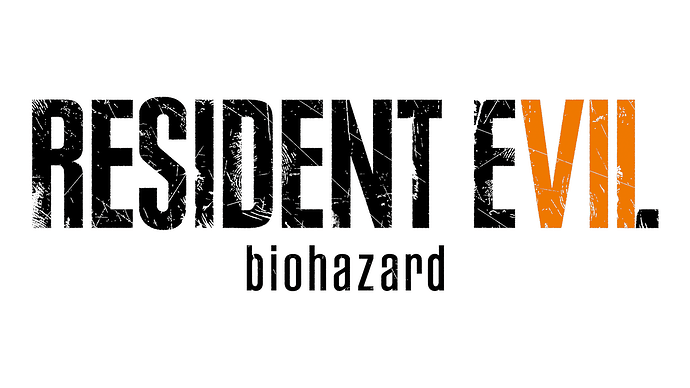 *AKA: The “Why You Shouldn’t LP The Hardest Difficulty of a Game Blind” Project

Hello, everyone. I’m ReplayTyHeretic, and this is Resident Evil VII: biohazard. At least that’s what I always say in the video, so why should I say it here? If you’re expecting a professional, top-tier playthrough where I find absolutely everything in one go, then this is not the place for you. What started as an innocent project with the knowledge of Normal difficulty in hand quickly turned into a project where everything I knew was wrong, and the game fought back hard. In every episode, Resident Evil VII kicks my teeth out and makes me pick them back up; every episode is a struggle to make progress. What this project has become is a test of patience and willpower.

Why Madhouse Difficulty? You fool, you should have at least played it!

I know, right? I’m an idiot for even thinking this was a good idea! But I just had to know what it was like, and what better way to show others that this mode isn’t messing around than to show it kicking my butt repeatedly? (Well, obviously playing it well and actually comparing differences…)

Oh, great. A VR LP as well? What, are you going to have facecam, too?

First off, thanks for reading the title. Secondly…yeah, it’s all in VR. This game was actually the core reason I bought PlayStation VR, and while it isn’t the absolute best peripheral, REVII actually uses it masterfully. Aiming a weapon is based on head tracking, you can lean past corners to peek and do many things you simply can’t do in regular play. That said, it does have its issues. Like having to correct your position for certain cutscenes, or even that some scenes fade to black as a transition, which actually is the game spawning things for that cutscene. Also there’s the issue of positional awareness; it’s really easy to lose track of where you are.

But no, there is no facecam. I’ve tried that before and it just wasn’t my style.

Well, I’m always thinking. I tend to say my thoughts out loud and figure things out as I go along. For this LP, I remove the fact that I know what’s happening (sometimes failing, naturally), by doing just a little bit of roleplay. Being vague and not explaining what’s going to happen in terms of the story while explaining the gameplay mechanics is what you should expect. Even then, the game does catch me off-guard, and it does show in those instances what I knew in Normal difficulty.

As of Episode 6, the setup changes due to the headset breaking that was used in prior episodes. I use a set mic, which means that I sound distant while looking in VR.

Are you going to be using post-game unlocks?

Well, yes and no. I won’t be using post-game weapons, but I will be using, specifically in Episode 3, a pre-order bonus from the official PlayStation Store digital release: The Recovery Set, which contains two Herbs, a First Aid Med, a Strong First Aid Med, and a Coin of Defense (which I go into in the video), as well as a Scroll of Defense.

UPDATE: As of Episode 6, I have used the Albert-01R, a post-game unlock obtained upon beating the game on Easy. I figured it was par for the course, and it was for the sake of progressing, which I put ahead of my pride.

Why use these? Well, it was for the sake of progressing. Spoilers aside, I wound up spending a full episode, and a majority of a second episode, in the same area. And as much as I’m sure people would have liked the struggle, I couldn’t stand watching the same stuff for an hour, and that’s just how it had to be for the sake of the project.

Why the “found footage” intros? That beeping noise is annoying! 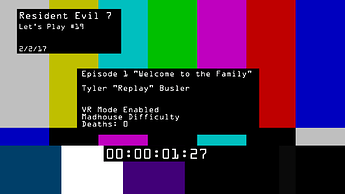 Consistency. When you watch a VHS in the game, they have these kinds of test signal loading screens. I wanted there to be a little bit of theming.

Also, these intros specify the date of recording in the top-left corner, as well as the mode, difficulty, and a handy-dandy death counter.

Okay, so you have my attention. Why should I watch this LP?

I’m always thinking, and I always like discussing game design within an LP. This is one of those “social experiment” LPs that started as a curiosity and quickly became an experiment. Now that I’ve seen what this game is capable of, and that it really does hate me, I can’t help but find out just how deep the rabbit hole goes. This LP will also cover the “Banned Footage” DLC after the main story is complete.

You made a post here, what can we do?

You can make discussions on the content in the episode, but please do not spoil things that will happen in future episodes. If you’re watching this LP after the project is complete, then this doesn’t affect you. I’ll try my hardest to avoid spoiling stuff in the LP, so I expect the same from you guys and gals.

What should we be aware of when watching this LP?

Blood and Gore: This game has a ton of blood and particularly gore. There’s dismemberment, impalement, stabbing, the list goes on. Basically, if you have a fear of blood or anything listed here, be careful.

Excessive Language: Swearing. Lots of swearing. From me, and the game.

Suggestive Themes: One of the bosses gives birth, literally, to nests of insects.

Fears, Natural and Unnatural: If you have a fear of blood, gore, torture, immolation, drowning, getting infected, insects, spiders, the unknown, guns, sharp objects like syringes and knives, or getting run over, then odds are you’ll be a little panicked when watching certain scenes in this game.

Jump Scares: This game contains jump scares. Although they aren’t as extreme, loud, or even as frequent as other games.

If there’s anything I missed, please tell me without spoiling anything. Odds are telling me what I forgot will remind me.

Man, it gives a really weird effect every time the captions clip through one of the character models. The scariest part of the Dulvey haunted house is the spooooky ghost words that follow everyone around.
Also is it just me or is the video volume really low? I had to turn the volume on my computer all the way up to hear anything.

I agree, and am starting to fix it in later episodes. It will probably be until Episode 4 to get the sound right.

I do at some point wanna play through this game in VR, since I bought the dang thing for RE7, but I also immediately started speedrunning the game after beating it, which VR hinders a bit, so I’ll be interested in seeing this!

Man, I know the game is styled to look like a found footage film, but even with the distortion on the sides and the interlaced look this game looks rough in VR compared to vanilla.

Really looking forward to this. I can’t seem to find any actual playthroughs of this in VR that aren’t just one off videos or people mugging for the camera. Plus it’ll be interesting to see how Madhouse is different to the easier difficulties.

The distortion in VR confused me at first. I think it’s the end-result of the VR output that is re-rendered into a flat resolution for display purposes. Regardless, I don’t know. When you actually play it with the headset on, it looks much cleaner, albeit the red vignette when you are injured is less informative than the vanilla’s red splatter.

I’m gonna have to start watching this at some point today, once I’ve finished my coffee and figured out this Unity issue. ><

albeit the red vignette when you are injured is less informative than the vanilla’s red splatter.

IMO it’s much better than the splatter. I found the splatter really garish and distracting, and since you can check your vitals I thought it was kinda useless. I get they were going for an analogue of the limping models in earlier titles but the splatter was just poorly implemented.

Funny you mention the limping, because that’s still apparent in this game. When in a Critical health state, you limp severely. This is obviously more noticeable in vanilla where the camera imitates that, but Ethan still audibly grunts with each pained step and his movement speed is effectively halved. I say the vignette is less informative from the perspective of having the headset on, because even getting tapped slightly gives you that vignette and tends to give some misinformation on condition.

For those wondering, episodes will go up every day from Monday to Friday. I’ll still be recording on the weekend, so send whatever feedback you want and it will still be considered in later episodes.

I’m definitely looking forward to this game becoming available on the vive… I’m quite envious of this though. I may have missed you talking about it… but did the locomotion system give you any motion sickness in this game?
Nice informative play though! I like your background info while getting startled, lol

You can set the walking speed, thankfully, although I play at “Normal” speed. It took a while to get used to one thing: Smooth camera rotation. In the options, you can set it to fixed increments, like 30 degrees or 45 degrees. For the sake of the LP looking as smooth as possible for viewers to not get motion sick, I play with Smooth rotation, which works as you’d expect in vanilla play.

That said, playing this initially does cause motion sickness, but I had practiced in Normal difficulty to get adjusted, and the trick comes from looking in VR at the same speed the camera is turning so you get as little rotation as possible. Then you can look freely in VR without causing motion sickness. It also helps to play other VR games to get adjusted to the feeling of moving autonomously; Until Dawn: Rush of Blood is actually a fantastic game to get used to forced locomotion.

However, this game also does masterful work in using as little extreme motion as possible in cutscenes while in VR.

Nice, I only have the vive for vr stuff, and there aren’t many games yet that have the forced locomotion. A game that it works really well in though is elite dangerous, having the ship around you really helps. Maybe someday I’ll pick up the psvr and give this a try, for now, the keyboard and monitor shall do. Thanks for the detailed response mate!

No problem. Hope you enjoy the series.

Episode 3 is now available for viewing. Wish I made more progress in the last episode? Well here you go.

Episode 4 is now available for viewing. Even more progress was made, albeit I forgot my timer, so you’re getting a feature-length episode out of it.

Episode 5 is now available. The next episode will go live Monday, so bring forth your criticisms.

Quick update before the video goes live tomorrow, specifying some changes to the series for the sake of progress.

Poll is closed as of 10PM last night. Didn’t get a chance to actually remove the poll because of food poisoning, but miraculously, our vote was a complete tie between the two main choices. (Which means that the third choice, “Player’s Choice” is what we’ll be going with.) Thanks everyone for voting, and because of food poisoning, the video will either arrive later today or tomorrow.