Let's Stab Each Other in the Back and Play Diplomacy! 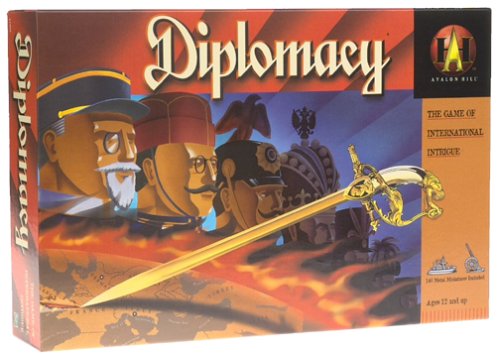 Diplomacy is an old board game, conceived in 1954 and commercially published in 1959, that acted as a rough simulation for studying the First World War. The game takes place in Europe, with seven players each controlling a major European power. It was also the first commercial game to be played extensively by mail. As such, it lends itself to play-by-forum-thread. I have a video game version, called jDip, instead of an actual board.

A World War One Simulator? Really?

Well, it’s a really rough one. The game doesn’t have a turn order; everyone writes their orders down before hand, and they all happen at once at the end of the turn. There’s no dice rolls; conflicts are resolved by showing up with more troops. It helps the game capture the nature of trench warfare despite trenches not being a gameplay mechanic.

That’s… kind of lame, honestly. Doesn’t that just bog the game down?

I’ve heard that from a lot of games, though. How is this different?

Here’s the appeal of the game in two sentences.

It is impossible to win this game without making alliances.

It is impossible to win this game without breaking alliances.

This is a game of lies, deceit, planning, strategy, and, ironically enough, trust. Despite it’s conception, this is not a game about WWI; it’s a game about betrayal.

I think I’m on board, what should I know?

Check out the second post in this thread for game rules! If you already know them and just what to sign up, just say so! Please post Sign me up (bolded, so it’s easier for me to see) and I’ll throw you onto the list!

I’m going to hand out countries randomly. I want to make it easy to join this game, and I think that getting seven players who are OK with any country will make for a better game.

In the meantime, here’s the board itself! Go ahead and get yourself acquainted with it. 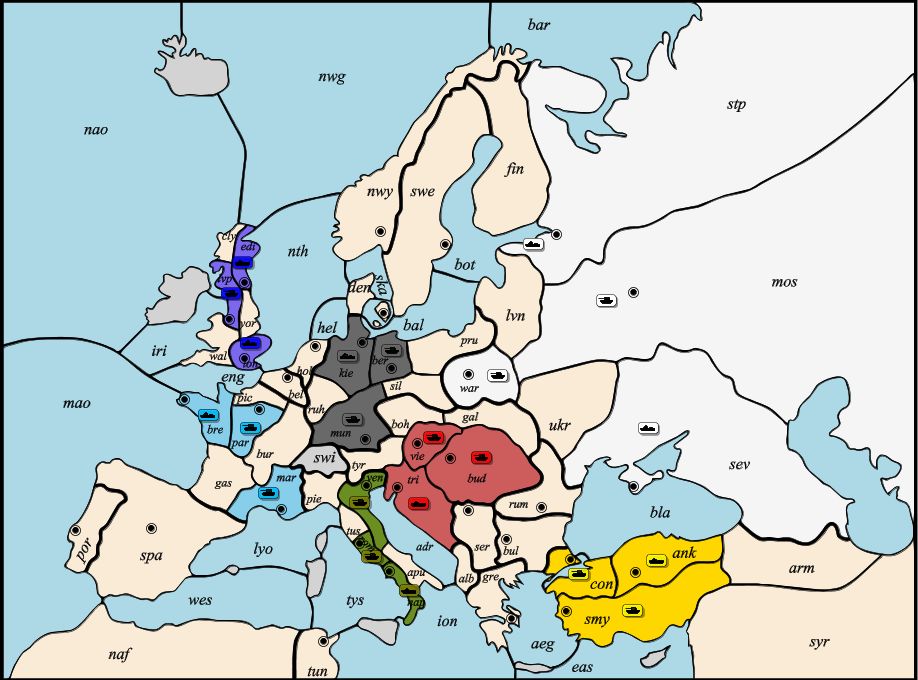 What are the rules to this game?

Check out Backstabbr for a light overview. Here is a comprehensive list.

That’s cool, but can we get a really light overview? I just want to know what to expect.

Let’s start with the objective: your goal is to capture 18 of the 34 Supply Centers (provinces with dots) on the map.

On a turn-to-turn basis, you will be sending me the orders you want in a PM. My linked sources explain the rules for orders better than I could, but I’ll try to explain each type of move briefly.

To move a unit, write the type of unit you’re moving (F for fleet or A for army), the province that unit is in, and the province you want it to be in.

To have one unit support another, write the type of unit doing the support, the province that unit is in, and the move that you want that unit to support.

This one is…tricky. First, write a movement for an army unit that involves it moving accross a sea province. Next, write a support move for the fleet unit that is in the sea province your land unit is moving through. This one is easier to write than it is to explain, I promise!

To have one unit do nothing, write the type of unit that’s holding, the province it is in, and the word “hold.”

Wait, what exactly does support do?

Support is primarily how you coordinate attacks! Every unit is at equal strength, so they can’t force each other to move. You can’t just have multiple unit move to the same province; that will just result in all of them being kept out. Instead, you can increase an army’s attack power by having it’s move be supported!

I’m looking at the map, and I only have three units. How am I supposed to have my units support one another?

That’s where the meat of the game comes from! Your units are not limited to supporting your own unit! One unit can support any other unit, even if it is owned by another nation!

This is where the backstabbing and deception comes from; at some point, you will need another country’s units to support your own. But since all moves occur simultaneously, you have no gaurantee that they will do so!

Are there any rules for lying?

…This is a little weird to say, but it’s important that a game like this encourages and allows for deception. In other words, you cannot prove that you are going to do as you claim. I’ll explain properly once we get a game going, but keep in mind that this game’s fun is built on lies.

OK! I’ve read all the rules, I signed up for a spot, and I’m ready to stab some backs! When do we start?

We can work out the exact times when we start, but here are my baselines!

All turns will be 24 hours.

All turns will end at noon EST.

I will have the results from the turn posted in the thread as close to noon as I can. If my post is not up by one, then the turn will be extended.

Last question! What do I do if I’m not sure how to phrase my turn’s moves?

You have two options here! One, you can ask me! I can’t gaurantee when I’ll respond, but I will do my best to help you accomplish what you want your turn to do!

If time is an issue, and it probably will be, use this! It can be a pain to get running, but it’s a nice GUI that can help you write turn orders.

With all that said and done, there’s naught to do now but wait!

Here is the roster for the game! It will be updated with players as people sign up, and I will add country names once those are assigned.

This sounds very interesting, and something I’d be down for, but I would like to ask some things first, if it’s not a problem, 1) all of the political part of the game, like say, forming alliances and such, would that be done in the thread? or would we be sending you PMs and you’d act as an intermediary? and 2) would we be allowed to do some kind of roleplay? like for example, If I’d like to act like pompous president, as long as it doesn’t get in the way of the game, of course.

Generally speaking you will want privacy when you talk to other nations. If you post in the thread, everyone can see your plans, and that leads to problems. I’ve also seen games where people make their moves public before turning it in, and it created a precedent. Nobody wanted to believe someone unless they showed their move in public, and it killed the intrigue.

As for RPing, sure. I don’t mind. You should probably check with the other players, but I don’t see any reason to ban it out of the gate.

EDIT: I should probably clarify then; this thread will be for watching the game unfold! People who didn’t sign up will be able to comment on it, and I might try my hand at a write-up once it’s all said and done. And, of course, once the game is over, all of the players will be welcome to post their own write-ups about the game.

Well, sign me up, because I’m ready for war.

and have a good time.

I would like to apologize ahead of time in case I make any errors while communicating, english is my second language, so I make mistakes from time to time.

Sign me up so I can get promptly slam jammed by every other nation simultaneously.

I don’t know what I’m getting into, but Sign me up. This sounds like extremely my kind of game.

For reference, what timezone are you running the game from?

I’m in the Eastern Standard Time Zone. I completely forgot to mention that; thanks for reminding me!