Let's Play Halo - He Kills Aliens And Doesn't Afraid Of Anything 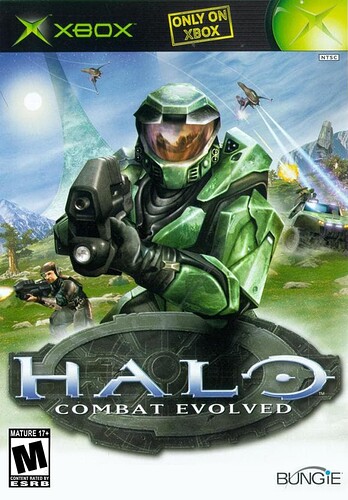 The Halo series is near and dear to my heart. Back in elementary school, my cousin, Vinny, would play Halo 2 split screen with me. This ultimately led to me getting my own Xbox and copy of Halo 1 and Halo 2. Since then, I’ve play every mainline entry and most of the spinoffs. I’ve only not played Halo Spartan Assault, Halo Wars 2, and Halo Infinite. However, that last one is only because Infinite came out a week ago.

Halo started life as “Monkey Nuts,” a codename for Bungie’s new RTS. The title was to be released exclusively for Mac computers. As development continued, the titled morphed into a third person shooter. Finally, it became the iconic first person shooter we know today. The title also changed hands. Microsoft, direct competitors to Mac’s computers, were thinking of getting into the console market, having already considered and opted out of buying Sega. Seeing the end of Sega’s console years as an opportunity, Microsoft decided to go ahead with their own system, the Xbox, and considered Bungie’s title, now called Halo, as a potential exclusive.

On November 15th, 2001, Halo launched. As far as console first person shooters go, there had been many before Halo, such as Perfect Dark and Golden Eye. However, there was always complaints about the control systems of those games. Halo succeed in making a control system so useful that almost every First Person shooter for consoles has borrowed that layout since then. In many ways, Halo made the console First Person Shooter boom of the mid-2000s and early-2010s. However, I wouldn’t associate the series with the “problems” of that boom. Halo was unique among other titles at the time for large open environments, more traditional approaches to FPS map layout, and a strong recalcitrance to following trends in the industry.

My first Halo was actually Halo 2. I played that before Halo: Combat Evolved. As such, I always had an odd view on it since, arguably, Halo 2 is the better title and I played it first. However, the title has always stood on its own merits with me. Especially all the fun I had with the PC release and the many, many wacky mods of Custom Edition. You see, I own the game a few times: the original Xbox, the PC release, the Xbox 360 Remastered, the Xbox One Master Chief Collection, and the PC Master Chief Collection. A fool and her money…Regardless, both the original PC release and, recently, the PC Master Chief Collection allow for mods and Halo Mods were certainly novel back in the day.

We will be using the Master Chief Collection’s version to play the game. There is some thing that should be disclosed. The best version of Halo is considered the original Xbox release. However, I do not own a capture card so a PC version was a necessity. I still have my old PC title, but the Remastered and MCC version use the Gearbox PC port as a basis anyway and the MCC version has the most features. While the MCC version is inferior, it’s the one I can most easily capture.

Lady Mapi and I will be playing the original Halo. For now, that’s all we have planned. We will be doing a somewhat humorous, somewhat informative video LP of the title. All of the footage has been recorded, but commentary is only up to Episode 3 at this point. We thought it best to have some backlog, but also have the majority unrecorded so we can respond to the thread in videos.

Brief aside, in episode 1, we briefly mention another LP going on hold. That was an LP we were doing on another website. I know that the discussion means nothing to you all. Just thought I should explain that here.

Without further ado, I hope you enjoy the video. To be honest, Lady Mapi is really the one who does LP as a hobby. I just like spending time with my old college friend and, thanks to COVID making it unsafe for us to travel to either’s state, this is a fun way for us to collaborate and spend time together. Not sure if that makes for entertaining content, but I hope you enjoy what’s there.

And we’re back for another episode. This time we are taking the Level Halo, which is the first appearance of a Halo in Halo. We have some fun, I die a few times, and we chat a bit about random shit. Also, seriously, is it me or did the Gearbox Port turn the Warthog into a boat? I swear it never felt that hard to control on consoles.

We are ready for yet another adventure. This time John Halo and his assistant, Microsoft’s Cortana, have lost their keys on a ship owned by the intergalactic catholic church. Hopefully they won’t get lost in the winding church corridors. Good thing John Halo has his merry band of marines to keep him company, a loyal, sturdy resourceful bunch. Also, has anyone here ever seen predator? Not sure why I brought that up.

In a shocking move, we mostly stay on topic as we discuss Halo’s most impressive and iconic level. Come see what is honestly everyone’s favorite level in the game.

Update 5: Assault On The Control Room

Prepare to watch John Spartan die so many fucking times that you will question if I was ever good at this game to begin with. Our longest video in the series accurately summed up as the game repeatedly kicking me in the balls.

Episode 5: Assault On The Control Room

Today, we do some character acting as Halo takes a brief diversion from being an action game and goes for a clear horror vibe. Join us for what some consider to have the best environmental storytelling of the franchise.

I got a little drunk and it shows a lot. This level and the next one are my least favorite levels. They were slogs to get through and really ruined my fun. As I was drunk, I was much more candid and crude. Hopefully you like it?

Seriously, though, this level is just one long corridor with endless monster closests. This is fan Foom WAD levels of map design.

Welcome to ASSAULT ON THE CONTROL ROOM PART 2: ELECTRIC BOOGALOO!

Today, I got super drunk. Died a lot. GOT FUCKING SHOT BY THE STUPID FUCKING ROCKET FLOOD BULLSHIT WHY DID THEY GIVE THEM ROCKET LAUNCHERS GOD DAMNIT a few times. Talked about random bullshit like Kingdom Hearts. And relatively had a pretty fun time.

We are at the point where level design takes a backseat, as does enemy AI. The levels are just reversed versions of the older levels. And the Flood continue completely unfun. This is the last real lowpoint. I seriously do not know why I am having so much trouble. My best guess is that I am using a keyboard and mouse when I originally played Halo on a Xbox and there is just no muscle memory to help me along.

Still, even a bad level in a good game is okay.

Also, there is so much lore I want to talk about but I always get sidetracked. Like how interesting it is that they clearly wanted to do an ancient alien thing with the humans. They did do that, of course, but I always got the vibe the original plan was for humans TO BE Forerunners. Like, they were remnants of the Forerunners. The official explanation of them being just ancient enemies of the Forerunners that got devolved and put on Earth and stuff just feels so…unintuitive. Does anyone else care about Halo Lore? I am down to chat.

We learn a lot about Halo’s backlore, go back to the Truth & Reconciliation, we talk about random shit, and I die a lot. Also, this level is better than the last level. I really don’t know what is up with the Assault On The Control Room map that makes it so hard. But Keyes goes smoother. The Flood continue to be underwhelming. It can’t be understated what a downgrade they are. You go from the really complex and almost revolutionary combat AI that made Halo amazing and still makes it stand out from the crowd to Doom Enemies. And not like 2016 Doom. Also, it’s still just fun getting a chance to hang out with my old college friend. We chat about Norway, Antarctica, and how the logistic of a five-way sex thing just doesn’t make any sense and what are you even doing at that point?

Also, we go back to the SAME SHIP to rescue the SAME PERSON in a lot of the SAME MAPS. lol

FINAL UPDATE: THE MAW: THE ENDING OF THE HALOS

Today, we end our long national nightmare. Going back to the beginning, we fight our way through waves of Flood, destroying the Pillar of Autumn, and ending the threat of the covenant and Flood forever. Seriously. There were no games after this one. Cough

To the people actually watching, thanks for doing so. It was really fun doing this video series and it was a great way to reconnect with an old friend. If anyone enjoyed it along the way, then that’s awesome. It helped brighten up my busy season at work, too. Being able to release these videos and rewatch them was a good way to ignore some of the long hours this month at work. So, to everyone watching, you’re cool, you’re awesome, and I hope you enjoyed this mess.