Hiya! I’m Mizu and this is my first time posting my LPs on a Big Kid forum, so I’m a little nervous… But I decided to play Azure Dreams because it’s the first game I remember ever renting for the PS1 when I was a kid and I liked it so much, I bought it ages later. 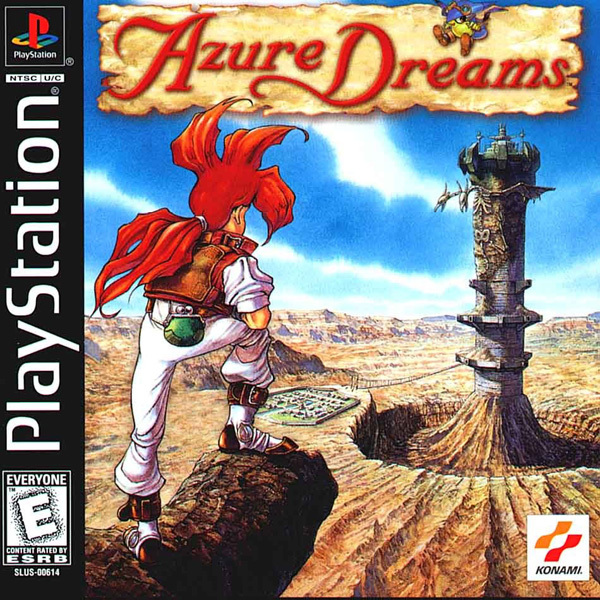 For people that don’t know, Azure Dreams is a hot mix between a roguelike and a JRPG. One portion of the game is spent talking to people in town, upgrading buildings, and getting those sweet relationships with people going. The other part is climbing a randomly-generated tower with a limited amount of inventory space and monster companions and seeing how high up I can get! Fun!

This is going to be a solo video LP, with episodes kept pretty short (12-15 minutes) and HOPEFULLY weekly updates. I’d rather there be no plot spoilers in posts from people. Feel free to comment on what’s already happened or Sweet Tower Climbing Tips, though! I’d also really appreciate any feedback of any kind so I can grow in the future! Thank you!

I didn’t think I’d see a let’s Play on this game ever again, I wish you luck on this venture

I almost wish the game let you enter a name and then your parents just named you something else anyway.

Based on the cover art. I can only assume Frisky decided that before he goes to the tower, he will first travel all the way outside of town and go even further from the tower to gaze at it dramatically.

The RNG does not like me thus far, I can tell you that much…

The sprites are low-key terrifying but the game looks interesting enough! I’ve never heard of this before so I’ll be on the lookout for future updates!

Part two is up!

I’m thinking that I might make the LP go from an on-the-fly format to a post commentary one, if only so I don’t have to force people to hear the sound of my controller and/or any random noises I can’t edit out. My biggest worry is that commentary might end up sounding weird. So what I’ll do is I’ll do one episode (4) post commentary and then aggressively request input/opinions from you guys. Sound good? C:

I’m beginning to understand why someone might not want a familiar that can “speak human language.” Though I guess it does give a good in story reason for a really poorly worded tutorial.

Part two is up!

I’m thinking that I might make the LP go from an on-the-fly format to a post commentary one, if only so I don’t have to force people to hear the sound of my controller and/or any random noises I can’t edit out. My biggest worry is that commentary might end up sounding weird. So what I’ll do is I’ll do one episode (4) post commentary and then aggressively request input/opinions from you guys. Sound good? C:

Just a heads up it’s customary to put a link to the video in an update post like this so people don’t have to scroll all the way back up to see the new video.

Ah, thank you for letting me know. In hindsight, that makes a lot of sense…

I’ll be sure to do it with the next part, since it’ll be a lot further down the page.

Third part is being posted grossly early because I have WORK to do today. After this, it’s three post-commentary parts. Because I don’t know how to record a single part at a time, ahaha…

It’s a little later in the day than I’d like, but…

It’s Part Four! This is the first part that has post-commentary as opposed to a commenting-while-playing style. There were some sounds that I couldn’t get rid of, but I did appreciate being able to cut out my breathing (why do people BREATHE so MUCH?!)

Please please please please let me know what format you guys think is best. Two more parts will be post-commentary, then there’ll be a delay in posting part…seven, I believe, so I can gather everyone’s opinions and decide from that what to do!

I’m also realizing that I have a serious problem with letting there be long periods of commentary silence. Isn’t it better to let there be no commentary as opposed to meaningless talking, though? I don’t know! Opinions?

I left a comment on the Youtube video, but I think this commentary style works well. It will also allow you to edit future videos, in case you have runs where not much of interest happens - you can cut it down to just highlights and then comment over that without losing any interesting material or any commentary.

As for long pauses, there’s no problem with them. If whatever’s happening in the game is interesting, it can stand on its own without you talking over it. If it’s not, then you can always just edit that part out. You should be able to find a good balance over time, but there’s really no need to fill every gap with commentary.

Hey you guys. Due to personal issues that have been going on, the release of the next part is going to be delayed until the end of this week. To make up for this, though, I’ll be uploading the final two pre-recorded post-commentary parts. It seems like that’s a good format, too, so all following parts will also be post-commentary.

Thank you so much for your patience.

Two parts today! These are the last two parts to the post-commentary test. Please pay special attention to the note at the start of Part Five. There was something that I was only able to tweak so much, so I let y’all know when to skip if you want to. The second I figure out how, I’ll put an annotation into the video proper so it’s easier for people to skip!

As stated before, since it seems like PC is better, I’m going to go ahead and keep following that format. Also, I need opinions on whether or not I should just cut out all the dungeoning stuff that isn’t very interesting. This is aaaaall a learning experience.

Hopefully, I’ll be able to update more often now, since I’m learning more about editing and how to make it an overall smoother process. C:

I found Youtube’s annotation interface to be fairly simple when I used it to skip parts of a video - you just pick where and when you want it to appear on the video, what you want it to say, and the URL you want to link to, which is the same video with &t= and whatever time you want to jump to. I like to use minutes and seconds format, so &t=4m50s for example.

You’ll need to do it before May 2nd, though, because word is that Youtube is going to remove the functionality to create new annotations then.

As for dealing with the boring parts, there are plenty of ways to deal with them. Cutting is recommended if it’s stuff that’s already been seen, like repeated trips through early floors, and you can make a montage of interesting moments, such as important items you collect or level-ups that come with abilities. If there’s something that takes a long time, but seeing how long it takes is itself interesting, you can always just speed up that part of the footage and comment over it at normal speed. Post-commentary gives you a good benchmark for when a video is too boring - if you find yourself getting bored while doing the commentary, it’s time to consider editing further.

Managed to figure out annotations and it was added to the video.

I think my biggest issue is that I don’t want to make the video a choppy amalgamation of “and then this happened” because I’d like for there to be some semblance of flow?? It’s hard to explain, but dungeon chunks seem rough and I’d like for things to stay somewhat smooth…

As it stands, I know that I’m definitely going to have to record like…30-40 minute videos and trim them down… I need an external, ahaha.

Mizuru asked me to pass along the message that she’s currently sick and exhausted and won’t be able to update the LP until she recovers enough to function. Spice girls out.

Whew, I can make a proper post on my own finally.
Like Nidoking said, I was pretty bad-off healthwise a few weeks ago and unable to do much. Once I finally recovered, Spring Break started, making it impossible for me to record anything. But now it’s the week after! I’m healthy and there’s no one to make noise!! So why aren’t I recording?

Turns out that all the silence in the world will not matter if you don’t have enough space on your computer to record footage. As stated in the last post I made…22 days ago, I need an external so I can properly record enough footage to work with and I sure as heck don’t have the money for that! So, until I can finally invest in one, this LP is kind of on a hiatus? Unless people don’t mind me uploading a video that’s got HUGE chunks of silence throughout…though, I don’t know what kind of an LP that would be then, ha.

If audio editing isn’t in the cards for now, do you know if capturing screenshots from your recorded footage would work out? I don’t know how much having a screenshot LP would click with your LPing style, but it seems like you’d be able to easily cover long chunks of gameplay while still making jokes, pointing out mechanics, etc. since combat itself is turn-based. Alternately, I like this game and I’m fine waiting to see more of it, so go with what you want to do!