Just breathe, you can do this. Let's Climb Celeste! 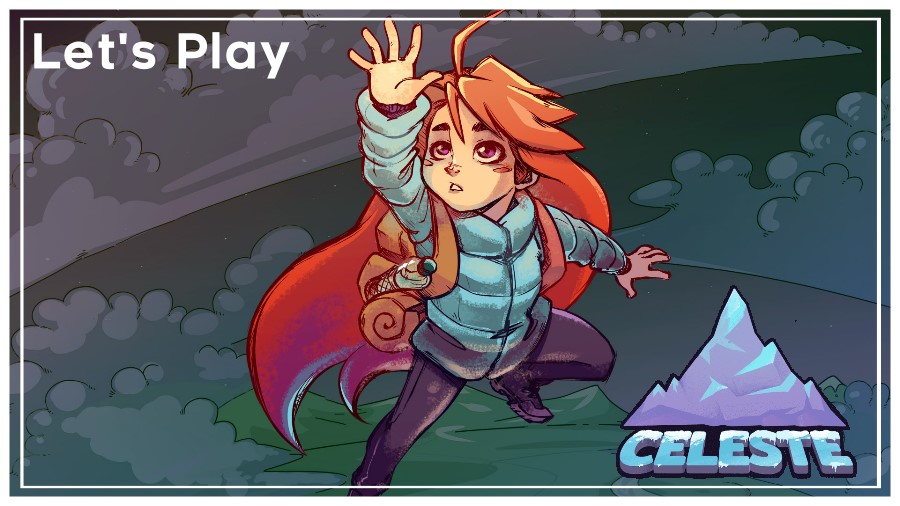 Celeste is a platformer released at the end of January 2018 by Matt Thorson and some of his friends. It’s based on a short game, also called Celeste which Thorson made for a game jam using Pico-8…

In terms of gameplay Celeste is a tough as nails but very encouraging game centered around a dash you can perform in any of eight directions to brave increasingly more challenging levels. Despite this single mechanic being the lifeblood of the game Celeste stays fresh all the way to the end and beyond.

Celeste’s narrative follows a girl named Madeline, who heads out to climb (an obviously fictionalized) Mount Celeste to run away from her problems but ultimately is forced to confront them. The story is surprisingly engaging for what kind of game this is and is a welcome change of pace from “Rescue the Princess/Animals/Whatever” or “Fight the bad guy/gal”

The game offers an Assist mode to make the game easier for those who have trouble. It allows to slow the game down, increase number of dashes, give yourself infinite stamina and make you invincible in any combination desired. This in no way judges the player or limits their progress. Even achievements can be unlocked with Assist Mode active.

To quote the game’s description of the mode:
“Celeste was designed to be a challenging, but accessible game. We believe that its difficulty is essential to the experience. We recommend playing without Assist Mode your first time. However, we understand that every player is different. If Celeste is inaccessible to you due to its difficulty, we hope that Assist Mode will allow you to still enjoy it.”

We will be doing a full run through all of the levels. Collecting the Strawberries, Hearts and B-Sides. We’ll also be completing all post game challenges with one exception that would not really benefit the LP (you will see what I mean once we get there). Even if we will be using advanced mechanics sooner than the game teaches them to us I would like you to not discuss them until I’ve properly explained them in the videos. The same, of course, goes for the game’s story. I’ll begin to explain things in more detail as soon as chapter 2.

Like with all my LPs I would like to encourage you, should you feel like this game is just your jam while watching the LP, to go play it yourself before watching further. It took me less than one minute into videogamedunkey’s review of the game to know that I wanna play it and I stopped watching just then.

All videos are uploaded to YouTube and collected in a playlist.

Pressing the banner or play button will link you to the normal LP, the Fast Forward symbol will bring you to a speedrun of the level.

Chapter 7
So you like our dude Theo? His InstaPix is TheoUnderStars. Look him up!

Kotaku have released an interview with Matt Thorson in which he talks about what Celeste’s story means to him and how it relates to his own experiences.

Feeling the Soundtrack? Here’s the Bandcamp page so you can listen to it anytime.
The B-side OST can be found here and features more cool tunes.

Here’s a reddit AMA with the makers of the game. Some interesting stuff.

If the stats don’t match up it’s because I did other stuff in each level not recorded for the LP. Like practicing hard jumps for the speedrun part of the videos and the likes. 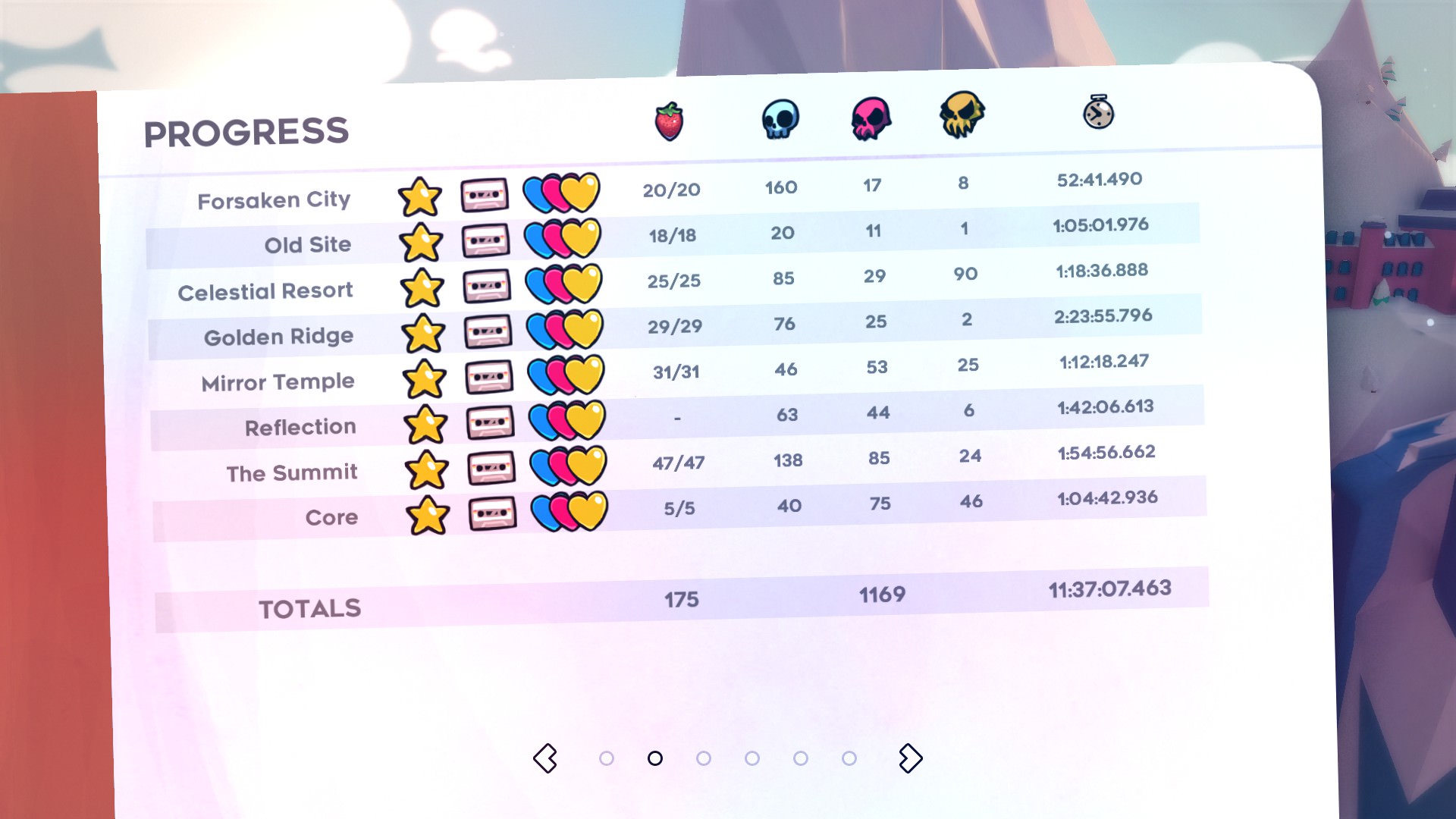 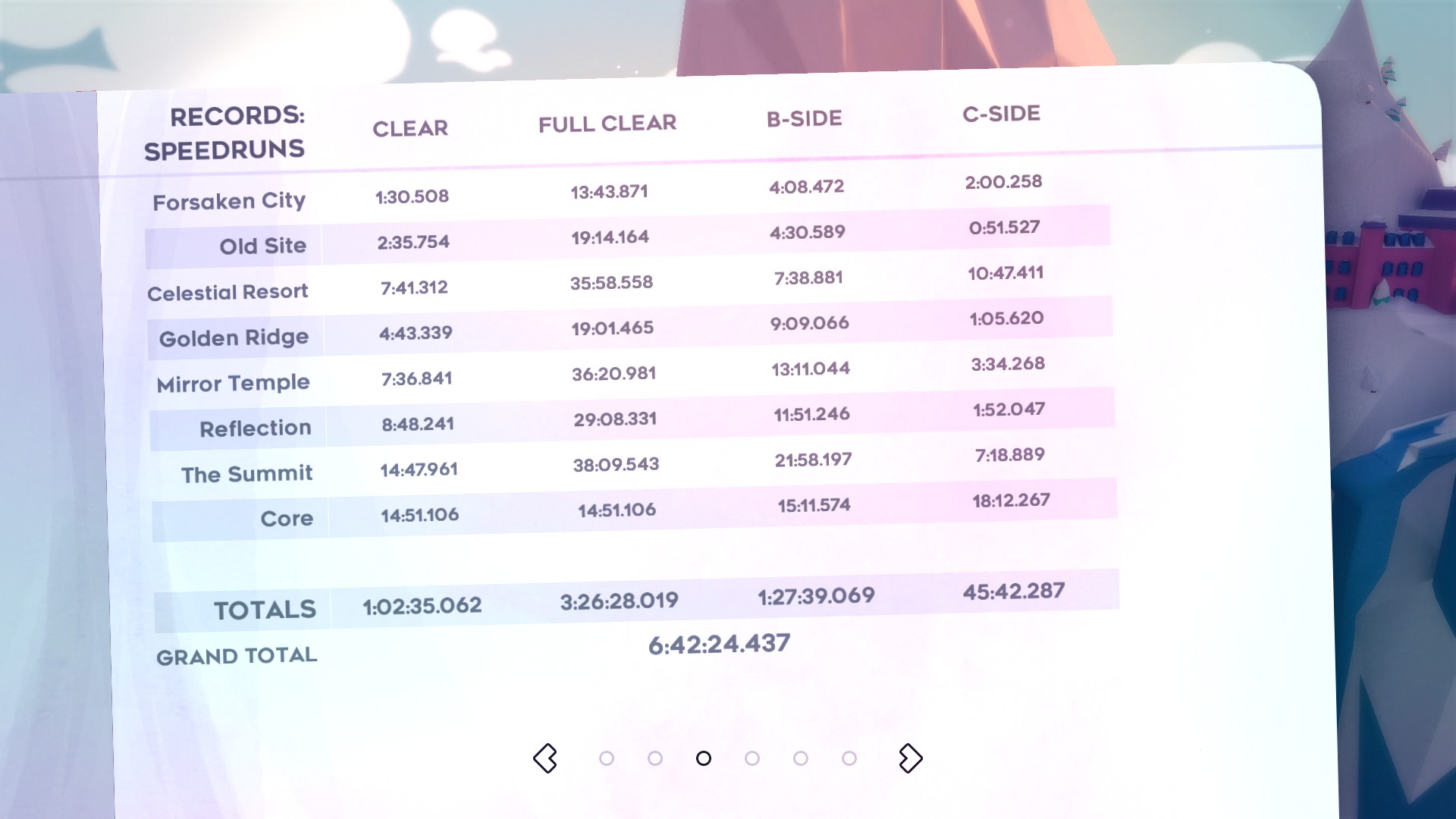 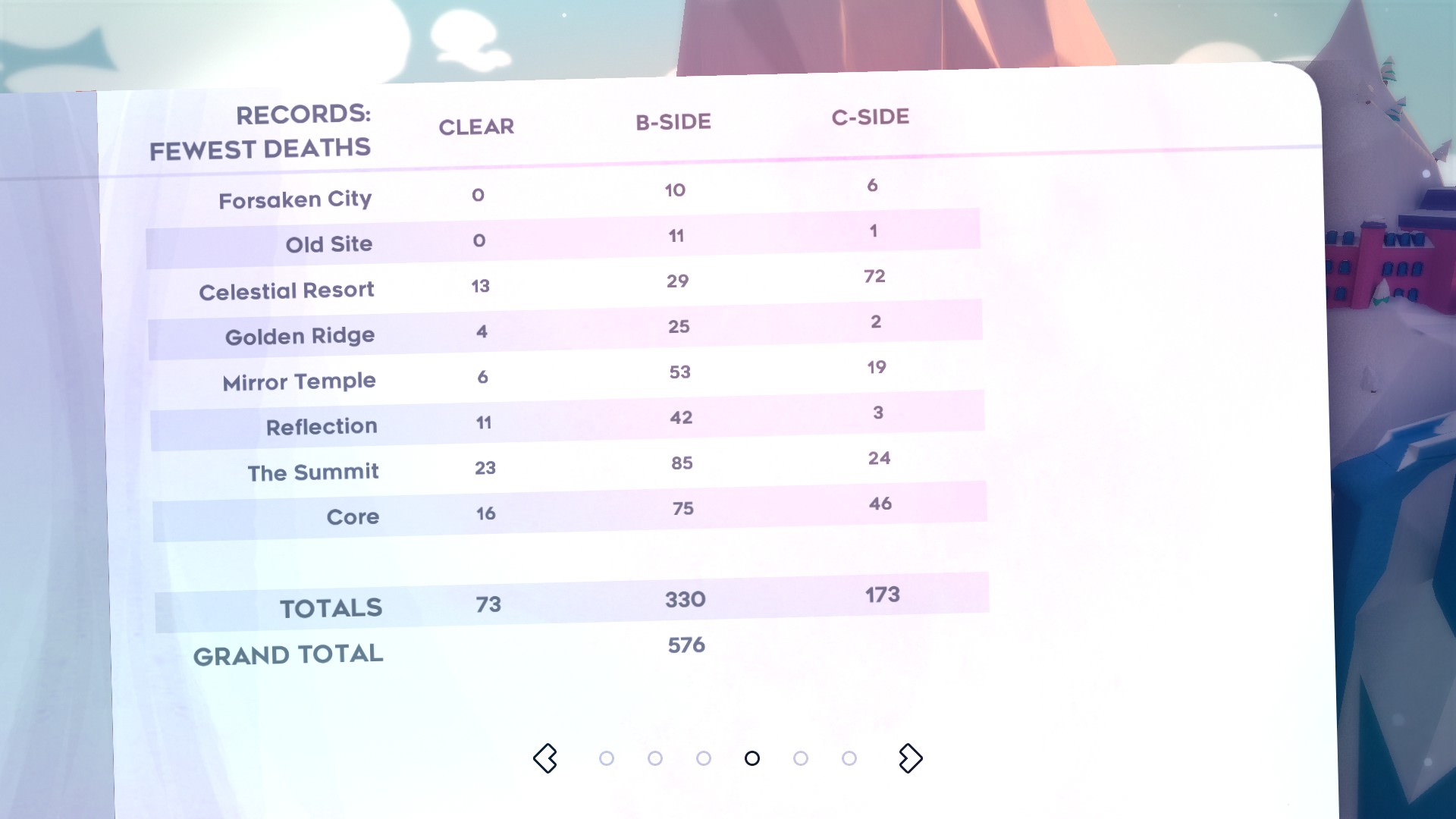 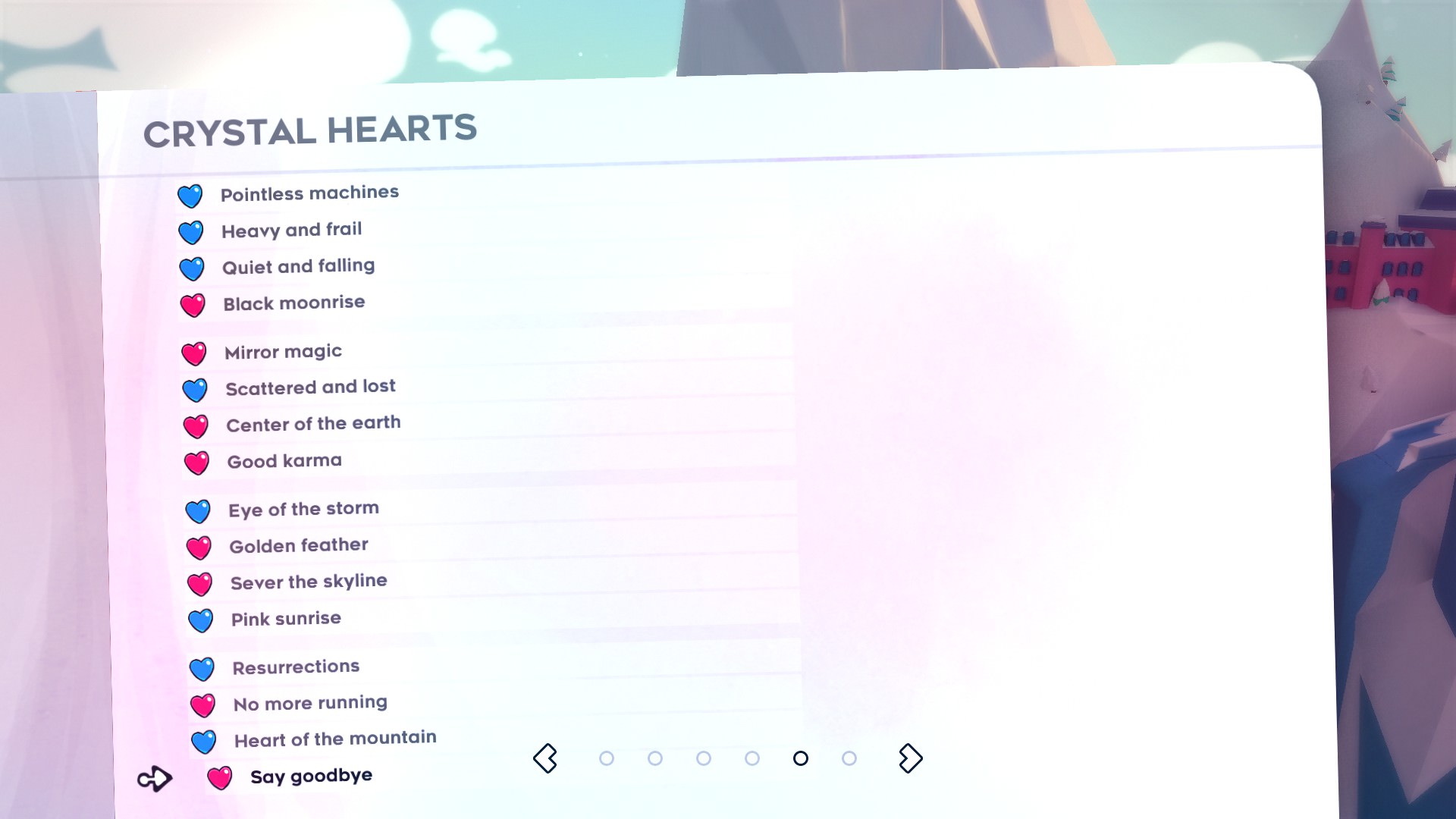 It’s chapter 2! And it has my favorite gimmick. Banner and play button start the video normally, the fast forward button skips straight to the speedrun portion of the video.

If you’re interested in the lead designer talking about the level design of the game I recommend checking out his GDC talk from last year, before the game had come out. It’s really interesting and covers mostly the first two chapters plus a bit earlier, work-in-progress chapter 3.

Funnily, Matt’s talk tries to show multiple approaches to challenges in the exact same spot I did!

I am glad you continued doing the speedruns of the chapters. God the art in this game is so good - so much good character deigns in the portraits and the sprite work. I saw the second chapter go up and decided to try “find” the game and did about 75% of Chapter 1 before coming to watch. (going to go back to it once I actually buy it.) It isn’t the sort of game where I could memorise the solutions/puzzles so I could watch it and just wait to play it once I forgotten the timing of the jumps.

Yeah, echoing the support for the speedruns and also just chiming in to say I’m enjoying the LP so far. I remember this coming out around the same time that I was knee-deep in Iconoclasts so I never picked it up, but it’s fun to see what I’ve been missing out on.

If you want to play Celeste Classic for the Pico 8 you can do so here.

Since I’ve done a speedrun for every chapter so far let’s compare some times, just to give you some perspective of what is possible. Times not mine are from speedrun.com.

Obviously, we’re far from having finished the full game for the LP, although I will be recording a separate full game run to close the LP out and hopefully show as much improvement as I have in my ILs so far.

Today’s chapter 4 is quite a change of pace from the busy chapter 3. Time for some peace and quiet.

With Chapter 5 Celeste mixes it up yet again by making the level feel completely different from all the ones before it.

An SSLP version of that big dialogue bit in the beginning may or may not be coming at some point. No promises. For the time being, though, this is very basic and contains some of the code/directions from the game files: https://lpix.org/sslptest/index.php?id=150764
It’s basically just for people who don’t want to sit through the 20 or so minute intro sequence. The truth is I had a more full fledged post prepared but lost part of my progress (some gifs lost completely, resized screencaps. Basically busywork I’ll have to do again.). Since this is a video LP anyway this will have to suffice for the time being.

And oh yeah, you can just get the entire game script from the game files. It’s kinda great. You can edit it too! 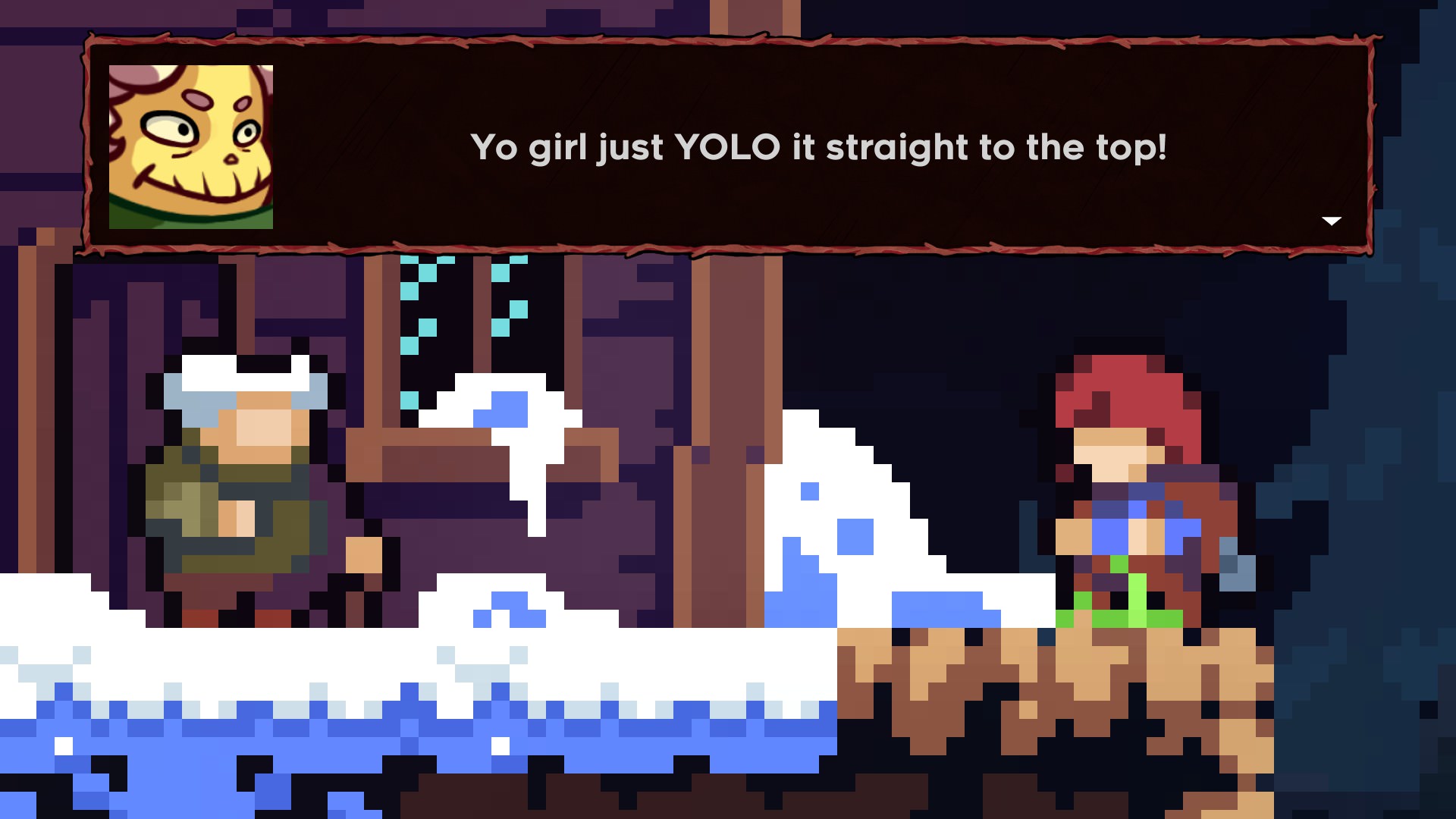 What does the pink skull mean?

Deaths on B-Side levels. Since we haven’t played any yet they are still at 0.

So you like our dude Theo? His InstaPix is TheoUnderStars. Look him up!

Kotaku have released an interview with Matt Thorson in which he talks about what Celeste’s story means to him and how it relates to his own experiences. 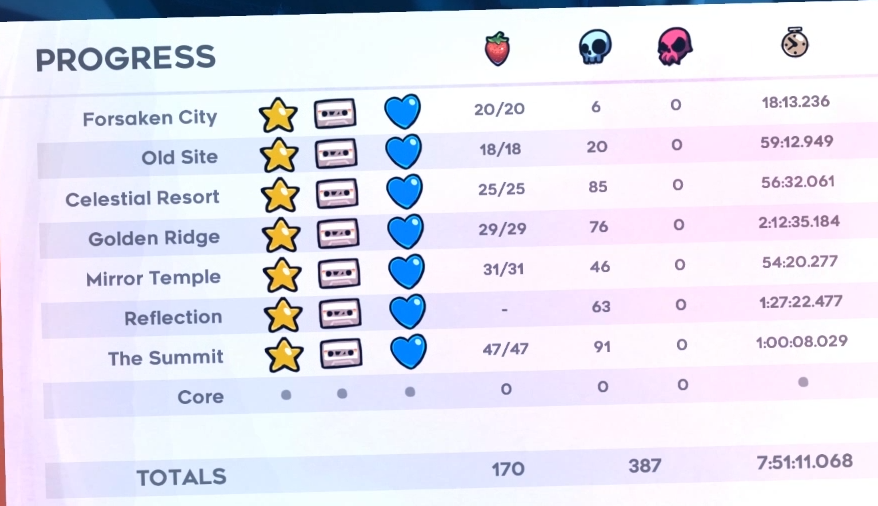 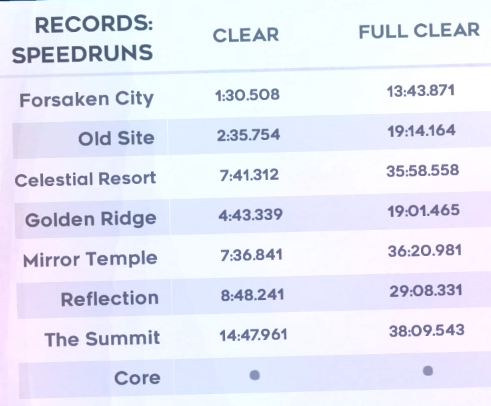 You might have noticed that this game as an awesome soundtrack. I almost feel bad for failing to link it. Well, here it is. Make sure to buy it if you’re feeling these tunes. Or just listen to them on the page.

All right! Time for the B-Sides! Kid gloves are off, let’s get to work.

More B-Side.
If you wanna hear about Celeste’s Music from the composer Lena Raine herself check out this podcast.

And with that we go through the last remaining B-Sides. But there’s still something we need to do after this.

Well, and these are the C-Sides! And also the end of the LP.

As promised at the start of the game here’s a full-game speedrun of the game. If you want to see a video without me talking over it you can find it here. Current World Record is 31:51.140 by TGH

If you care, here’s a graph of the world record progression as of today.
Source: spreedrun.com 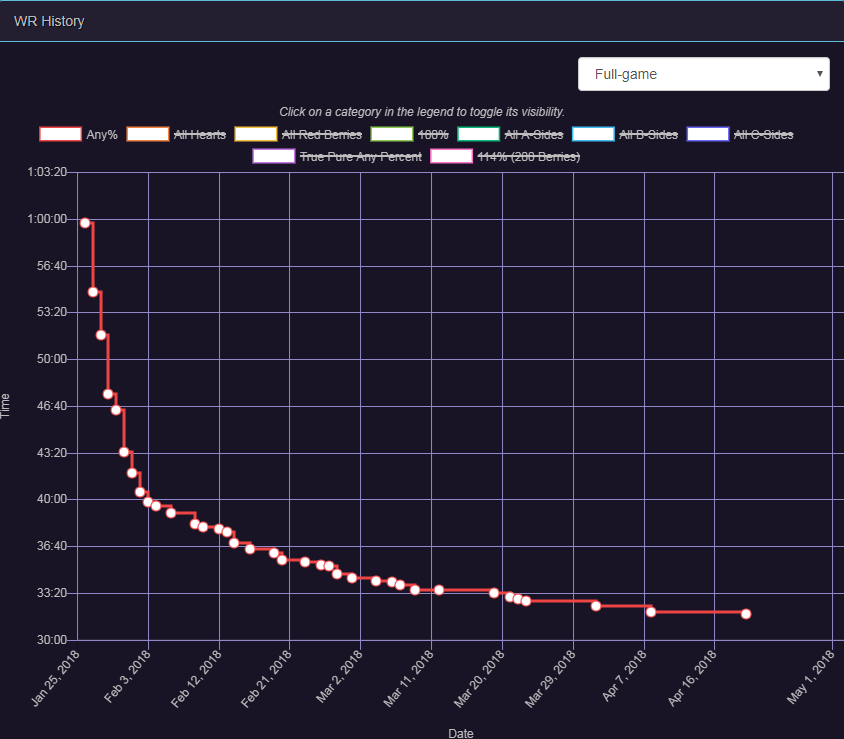 And of course, here’s also the final stats of the file I used for the LP

The raw footage recorded for this LP was 12:15:44 hours long
This includes footage from the first draft that had to be scrapped due to technical problems as well es the speedrun bits.

All of the final videos are 7:50:34 hours combined

And finally: Thanks for watching and participating. It’s been fun!

Thank you for LPing this. The whole ride was a lot of fun, even once the story was all wrapped up and the B and C sides began. A good LP for a good game.

All right @moderators the LP is finished and can be moved.
The thread may remain open too in case someone wants to tell me how poorly it’s aged ten years from now.