I realize that many of my friends prefer to post here in the Zone, so I’m cross-posting this from SA. I hope that’s acceptable!

So, like, there’s lots of hunting simulators out there. Sometimes they’re very serious, like TheHunter, which has often been criticized for making the simple act of finding a deer almost impossible for new players. There are some more arcadey titles, too, like the Deer Hunter series–one of which even had a multiplayer mode where you played as deer running away from hunters! Cabela’s titles have always been more in this vein, but they seemed to at least try to keep some of the spirit of hunting in real life, either through using real world weaponry and settings, or by rewarding you for proper technique. 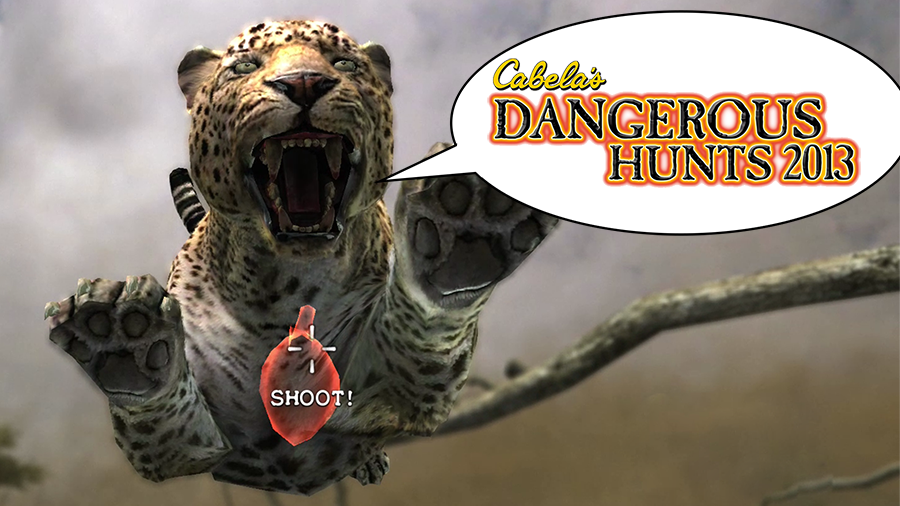 The Dangerous Hunts games are about a man who must kill every animal before they kill him. Sometimes he learns about family too or something like that, whatever. The previous game, Dangerous Hunts 2011, was an outright horror game, but this one is more of a Call of Duty with hyenas, so expect turret sections, leveled perks, and terrible dialog written by “the writer of Fringe!!” (who, in real life, was a guy who wrote two episodes of Fringe and then quit). Joining me will be a rotating range of people as we massacre the endangered list in the name of conservation. Stick around!

Part 1: Bear With Me
Part 2: Bonobon Voyage
Part 3: Snake in the Grass

Dangerous Hunts Part 1: Bear With Me

In this part, I am joined by KalonZombie and Dijon Dou Jour as we begin our trek into madness and conservationism. Please enjoy!

I realize that many of my friends prefer to post here in the Zone, so I’m cross-posting this from SA. I hope that’s acceptable!

A lot of people do it. So at least you’re not alone in your unacceptability.

Whoa hey look, my new favourite LP on here. Loving these innovations in storytelling, such as instead of the brother dying, this time it’s the father! Imagine! Man, what’s next? A globetrotting adventure inspired by 1930s film serials?

You know, I have to wonder what kind of super-bullets the main character is using that allow him to destroy wooden barriers with a single shot. Probably some sort of exclusive bullets only available to rangers with x-ray vision.

This LP is a lot of fun so far. I wonder where the game will go next.

Another video! There should be one a week, which means this whole lp will be done in like a month. Very efficient! Anyway this time it’s Great Joe and Paul Power, whose Britishness lends an air of class to the proceedings. Please do not massacre baboons in real life thank you and good night

I tried looking up Shakma on Youtube, first result was those Red Letter Media people, second was the movie in full, and third was the trailer, and I don’t actually know what that says about the movie.

I have to say, I did not expect baboons to make an appearance in this game, especially not in such large quantities.

So this time, it’s myself, Crimea, and Terror Van. We’re on the trail of the deadly black lion, and things get a bit political. Thanks for watching!

Man, this game just…keeps getting worse, doesn’t it?