It's the BLOOD HUNT of George! Let's Play Bloodborne 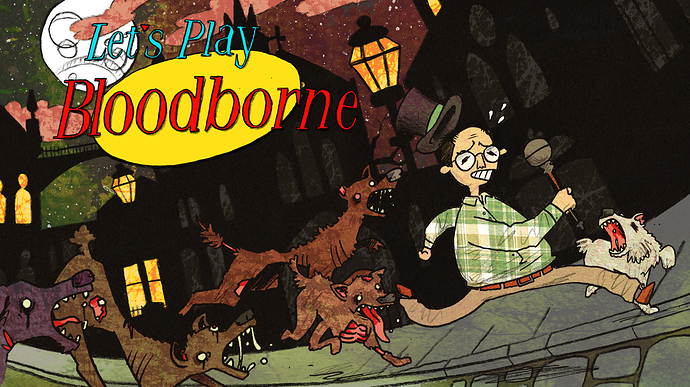 What is Bloodborne?
Really? You haven’t heard about this game? Well… okay.

Bloodborne is a spiritual successor to the Souls series of games, Demon’s Souls and Dark Souls. In all three series, the games are known for their punishing difficulties, insane boss fights, and obtuse ways of telling their stories through item descriptions and location details rather than just telling you them straight up through cutscenes. Bloodborne differs from the Souls games in a few rather unique, brilliant, and important ways, however.

The first is that Bloodborne is a much faster paced game than any of its sister titles, even the faster-paced Dark Souls III. This changes combat in incredible ways that make waiting for opportunities a far less appealing tactic than any of the Souls games do.

The second is that there’s no shields. There’s still ways to parry and punish enemies who attack you, but there’s no way to turtle up and play defense. Either parry, dodge, or die.

The third is the setting itself. The Souls games prefer Dark Fantasy settings, with dreary medieval worlds on the verge of collapse. Bloodborne has instead opted for a Victorian-era gothic horror setting.

Because I fucking love this game so much.

If you’ve been following me for a while, you should know that I hated, hated, hated Dark Souls for a very long time. I felt that its difficulty was artificial, its world was boring and dreary, and its controls stiff and unforgiving. I finished the Asylum, and after that I basically called it quits and went on a tirade for a year and a half about how “bad” Dark Souls was. When Bloodborne was announced I was initially interested, but I heard that it was just basically “another Dark Souls game” so I wrote it off as well.

Then on November 8th, 2016, HBomberguy released an hour and a half long video about how Bloodborne was genius and how the game’s system inherently and naturally teach you a more fun, fluid, exciting way to play deliberate action RPGs (which is what i call soulslikes because fuck the term soulslike its bad stop using it). He had convinced me to at least give the game a shot, so I thought I would buy it the next time it went on sale on PSN. If I didn’t like it, I didn’t spend too much money on it.

It was on sale the very week he released that video. The version with the DLC was less than $20. The timing was absolutely perfect. I bought it, downloaded it, and

holy shit guys this game is so fucking good.

It was only a matter of time before I LP’d the game that single-handedly turned my opinion on Dark Souls around. And that time is now.

Hasn’t everyone and their cousin already LP’d this game? What makes your LP so special?
First off I’ve always done my own thing. I don’t care if everyone already has LP’d this game, I love it, I want to share my love for it, and that’s all that matters to me.

Second of all, my LP isn’t really that special. It actually didn’t even start out as an LP, I was just getting footage for another project I want to do (which may or may not come out before the LP is done), and then I realized I was just gonna end up playing the whole game for the fifth time anyway, so I turned it into one.

However, I am bringing a friend who hasn’t seen much of Bloodborne before. She’s cool, you’ll like her, and I’m hoping that her reactions to all the batshit craziness will be enough to keep you around.

Spoilers?
Please no. I have no idea if she’s reading the thread or not, but I’d rather not have her, even accidentally, see anything that happens later in the game. Keep discussion to areas we’ve already seen.

That being said… enjoy Bloodborne.

Episode 1: You’ve Found Yourself a Hunter…
Episode 2: A Hunter Must Hunt
Episode 3: May the Good Blood Guide Your Way
Episode 4: The Hunter Shall Face the Hunt
Episode 5: Could This Be Joy?
Episode 6: Thank You, Dear Saint

I’m still slightly salty that I tried to get you to play these games for years and it’s a video on the internet that turns your opinion around.

Maybe you should have made a feature length internet video explaining why it was good, Ape.

Also whoops the video was private but it’s not anymore. LP is off to the usual kalonZombie standards.

This isn’t the first Bloodborne LP I’ve seen, this isn’t even the first LP where the player brings along ignorant co-commentators to get their reactions to everything. But I really like watching Bloodborne, the faster pace makes it a lot more interesting to watch than the Souls games.

I just got a brand new expensive game and now all I want is to start(and hopefully finish) Bloodbourne after watching this.

Bloodborne is very good and probably my second favorite souls game. I believe it is also free on PS+ for this month (and the also very good DLC is on sale) so if you somehow haven’t grabbed it off of there yet hurry up before you miss your chance.

As mentioned before Bloodborne has a lot of lps, but there are so many ways to play the game. Also your stream through was fun to watch, i’m curious to see where you take this crazy train of an lp.

Something I made in a few minutes. 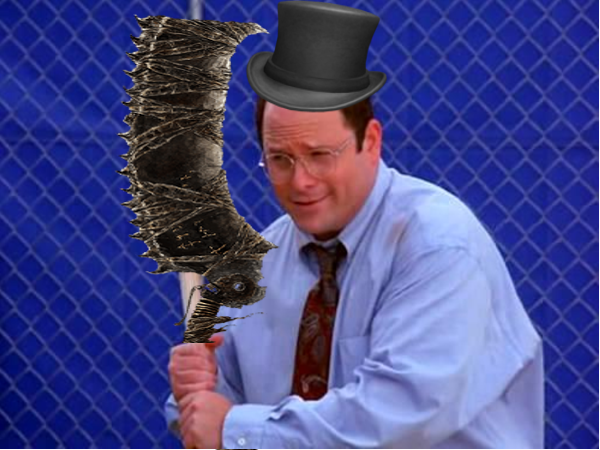 I bought it during a sale but never got around to playing it. Probably should.

If you start please make another Seinfeld character.

Episode 2! We wrap up Central Yharnam and also fight some bosses.

Episode 2: A Hunter Must Hunt

What’s that little green dot that sometimes appears at the bottom left of George’s bullets?

I stopped the video just before you fought Papa PetrolPence since I was apparently right beside him when I last left off. Despite wasting all my bullets on him and now my hands wont stop shaking I beat him.

Jesus though you made that fight look a lot easier. I didn’t know about the music box either, like I just assumed it would be part of one of Souls games super obtuse side quests.

To be fair I’ve fought Gascoigne about 6 or 7 times in the last year and a half. He’s easy when you know how to deal with him, especially compared to some later bosses, but he’s easily the first wall you’ll hit in the game.

Also, White Coke: That dot is another way of telling which form your weapon is in. It’s not super important.

Aye, he’s a huge spike in difficulty and pretty decent at forcing you to try and play the way they want you to. I also really like his arena being this mess of tombs that you have to really try and keep aware of.

That green dot’s the reason those bullets are so cheap.

Whoops, my editing was bad and needs to be thrown in the trash.

Shut up you are good and cool.
Just like perfect boy George the Hunter.

Due to me messing up encoding size, the double update is happening over two days, so uh…

Episode 3: May the Good Blood Guide Your Way